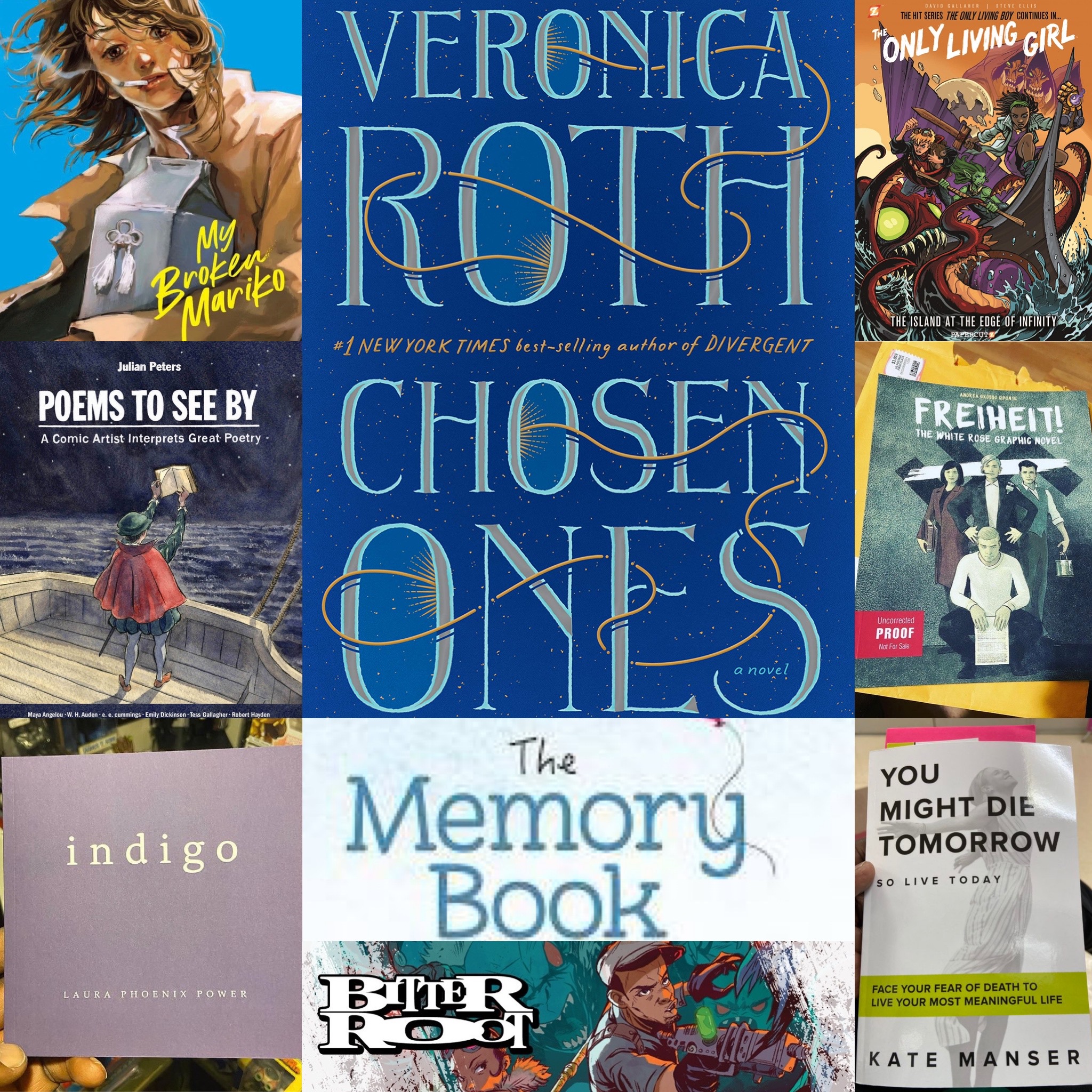 This isn’t a complete list to be sure, there are MANY notable works I simply don’t have the time or space to cover in this guide. These are just in my humble opinion, the “Cream of the Crop” this long tough year.

I will be publishing other lists of notable books & graphic novels and, collectibles, Geek Gear, games and toys as time allows before the Holidays! 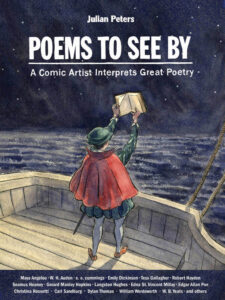 Over the course of 24 classic poems — from Maya Angelou’s “Caged Bird” to W. B. Yeats’ “When You Are Old” — the Montreal-based artist has created stunning visual interpretations of some of the world’s most beloved poems.

Each iconic poem is interpreted for the page using a different and compelling visual style, showcasing both the diversity of the source material and the storytelling possibilities of the comics artform.

POEMS TO SEE BY is a perfect fit not only for die-hard poetry fans and curious new readers—it’s also a fantastic teaching tool that any educator trying to get their students excited by poetry should pick up for their classroom. 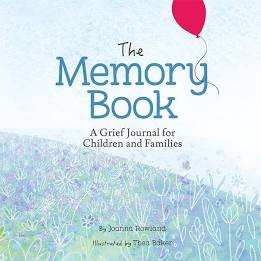 Not long before this Corona-19 crisis, I was given the opportunity to review this Book & Journal. I had no idea how relevant Joanna Rowland’s new journal would soon become.

Many an uncomfortable conversation and inconvenient truths were thrust upon us personally as a family. As I suspect are for you as well. Terms like Social Distancing, Shelter-in-place, Quarantine, once abstractions, were now daily realities. As well as scarcity and personal safety.

Joanna Rowland’s best-selling The Memory Box: A Book about Grief has helped thousands of children and Now, with The Memory Book, Rowland has created a beautiful grief journal to help readers put her methods into practice.

The Only Living Girl – Gallaher/Ellis 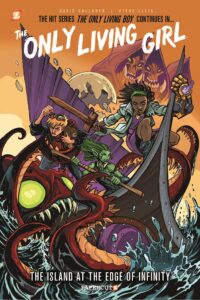 I featured David Gallaher’s brilliant essay and his and illustrator Steve Ellis mind blowing The Only Living Boy Series. Now in this time this little black girl Zee reminds me of my plucky little princess! I appreciate the representation and obvious care my friends took to make this character live and feel authentic!

Zandra ‘Zee’ Parfitt is one of the last human survivors of a cosmic disaster that merged hundreds of planets into the mysterious patchwork wasteland of Chimerika.

After learning that the experiments of her late father, the diabolical Doctor Once, created this world, Zee and her companions — classmate Erik Farrell and mermaid warrior Morgan — embark on a dangerous quest filled with robots, monsters, unknown civilizations, and unlikely allies.

Together they push back against the relentless Consortium, who want control of this new world at any cost. Through it all, Zee searches for the truth of her past so she can redeem her father’s legacy.

From the award-winning team behind THE ONLY LIVING BOY, David Gallaher and Steve Ellis bring you THE ONLY LIVING GIRL, an action-packed adventure perfect for fans of AMULET, MS. MARVEL, and DC SUPER HERO GIRLS! It’s A MUST BUY!

This Eisner Award winning comic and it’s creative team I’ve followed since inception! I featured it at its New York Comic Con debut in “The Revolution Just Might Be Televised” New York Conic Con 2018” and it’s a personal favorite of mine! Peep my interview with Writer David F. Walker & Artist Sanford Green from Artist Alley –

In the 1920s, the Harlem Renaissance is in full swing, and only the Sangerye Family can save New York-and the world-from the supernatural forces threatening to destroy humanity. But the once-great family of monster hunters has been torn apart by tragedies and conflicting moral codes.

The Sangerye Family must heal the wounds of the past and move beyond their differences… or sit back and watch a force of unimaginable evil ravage the human race.

DAVID F. WALKER and SANFORD GREENE, the creative team of Power Man and Iron Fist, along with indie veteran CHUCK BROWN (Trench Coats, Cigarettes and Shotguns) bring you 24 action-packed pages of monsters, mayhem, and family dysfunction in a brand-new ongoing series. BITTER ROOT Cover As by SANFORD GREENE will be connecting through the first story arc.

You Might Die Tomorrow: Face Your Fear of Death to Live Your Most Meaningful Life – Kate Manser 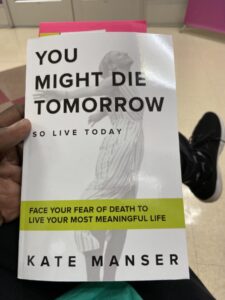 There is no better time then during a global pandemic for developing personal tools that simultaneously alleviate fears of death and immediately focus on living full lives, in line with our personal values, wherever we find ourselves hunkered down, without regrets.

That’s where Kate’s astonishing book “You Might Die Tomorrow: Face Your Fear of Death to Live Your Most Meaningful Life”, comes in.

Instead of wasting valuable time worrying about the uncontrollable inevitably of Death, acclimate yourself to face your fear of death with the insight that the best bet at “cheating death” is in your prioritization of joy to truly live.

I found Kate’s writing style to be refreshing, informal, witty and sublimely funny. She possesses an earnest, self deprecating, charming voice you can’t help but be positively motivated by.

I think anyone would benefit from the tools of making the paradigm shift from “Death as Spectre to drinking buddy.”
Understanding the psychology of mortality awareness and life prioritization techniques Kate delivers with her terrific first effort. 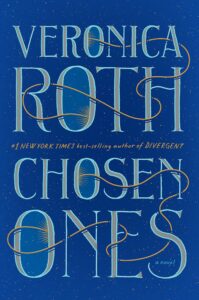 The first novel written for an adult audience by the mega-selling author of the Divergent franchise: five twenty-something heroes famous for saving the world when they were teenagers must face even greater demons—and reconsider what it means to be a hero . . . by destiny or by choice.

A decade ago near Chicago, five teenagers defeated the otherworldly enemy known as the Dark One, whose reign of terror brought widespread destruction and death.

The seemingly un-extraordinary teens—Sloane, Matt, Ines, Albie, and Esther—had been brought together by a clandestine government agency because one of them was fated to be the “Chosen One,” prophesized to save the world. With the goal achieved, humankind celebrated the victors and began to mourn their lost loved ones.

Ten years later, though the champions remain celebrities, the world has moved forward and a whole, younger generation doesn’t seem to recall the days of endless fear. But Sloane remembers. It’s impossible for her to forget when the paparazzi haunt her every step just as the Dark One still haunts her dreams.

Unlike everyone else, she hasn’t moved on; she’s adrift—no direction, no goals, no purpose. On the eve of the Ten Year Celebration of Peace, a new trauma hits the Chosen: the death of one of their own. And when they gather for the funeral at the enshrined site of their triumph, they discover to their horror that the Dark One’s reign never really ended. 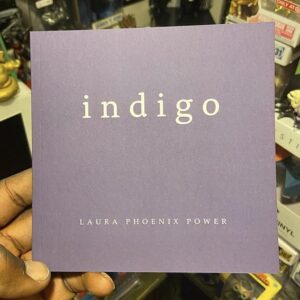 There’s a theory, that individuals are illusions, that at our core, we are the universes myriad aspects, trying to experience itself.

If so Laura is the expansive healing heart. Mirroring the illusion of separate entities. Her latest book “Indigo” a collection of powerful poetry, is one poem.Different aspects of a totality.

The pages are facets of a jewel, light bends to illuminate the flaws & imperfections that make the stone more beautiful for having been broken.

It spoke to me. Nourished me. I’ve only read it once. I suspect will read it until it falls apart. But I needed to thank my Sister for this rare gift. And share this slim treasure with all who crave the healing and renewal of a cleansing breath.

Laura reminds us even the darkest of times, are pregnant with positivity & light. I was a guest on her podcast and I’ll include the links to it and a full review and the embedded podcast ASAP! GO. BUY. THIS. BOOK! 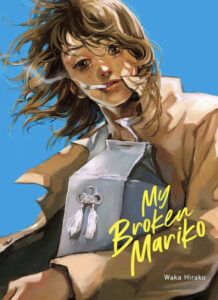 My Broken Mariko, from Yen Press is an emotional story about a close friendship between two young women and the devastating impact of suicide as one of them struggles to understand the sudden loss of her best friend.

Tomoyo Shiino has stood by her friend Mariko through years of abuse, abandonment, and depression. However horrific her circumstances, their friendship has been the one reassuring constant in Mariko’s life—and Tomoyo’s too.

That is, until Tomoyo is utterly blindsided by news of Mariko’s death. In life, Tomoyo felt powerless to help her best friend out of the darkness that ultimately drove her over the edge. Now, Tomoyo is determined to liberate Mariko’s ashes for one final journey together…to set free her dear, broken Mariko.

This new title exemplifies josei manga, which is characterized by mature storytelling, unique artwork and its appeal to older female readers.

My favorite manga of the year. 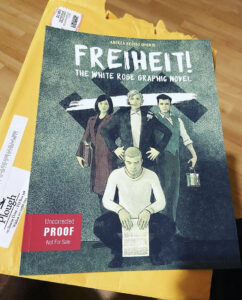 The true story of “The White Rose” a handful of students who resisted the Nazis and paid with their lives. They printed and distributed leaflets to expose Nazi atrocities to wake up complacent citizens in defiance of the Gestapo.

But, they didn’t silence them nor erase them from history. Thier heroism inspires new generations of resisters. The challenges and times may change but the need for young people to stand up against evil remains.

“Every people deserves the regime it’s willing to endure.” Is the first line, brilliantly timely and I was engrossed until I finished the book in one sitting. It’s a magnificently illustrated and taught thrilling retelling of the incredible daring if these students who gave full measure to end the evil in their midst.

Mr. Ciponte is a Calabrian painter, graphic novelist, filmmaker and illustrator like no other. He brought all his immense talent to this project and his work was shown at the Venice Biennale. This is one of the finest graphic novels I’ve ever read. And I’ve read hundreds!  I’ll have a full review ASAP

FacebookTweetPinEmailShares261
wpDiscuz
0
0
Would love your thoughts, please comment.x
()
x
| Reply
Share this ArticleLike this article? Email it to a friend!
Email sent!