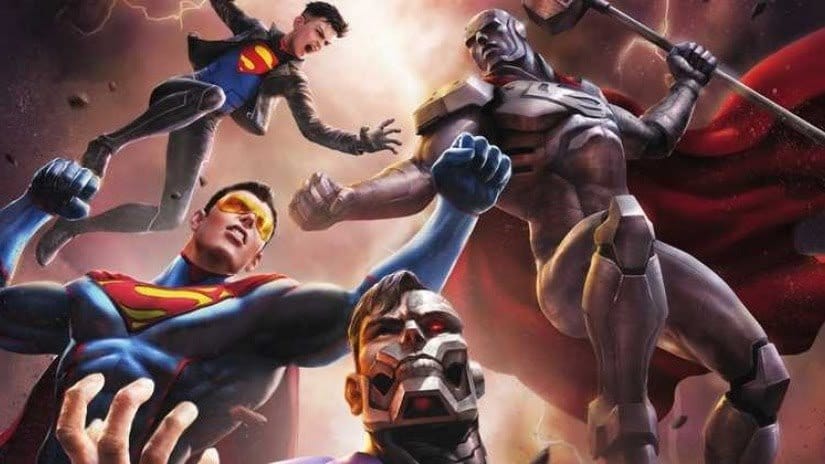 My kids and I attended a screening of “Reign of the Supermen”, the final chapter in the latest “Death of Superman” Story from WarnerBros.Animation.

Jerry O’Connell and Rebecca Romijn, the voices of Superman and Lois Lane, led a talented, refreshingly diverse, eclectic group of cast and filmmakers at the East Coast Premiere at Directors Guild of America in New York City, Monday, January 28.

Filmmakers and members of the voice cast attended the event for red carpet media interviews and a super livley post-screening panel discussion I’ve linked below in it’s entirety.

Junior Media Journalist-in-Training during the Q&A

O’Connell (Stand By Me, Carter, Bravo’s Play by Play) and Romijn (X-Men, The Librarians) were joined by Cress Williams (Black Lightning, Hart of Dixie), the voice of Steel/John Henry Irons; 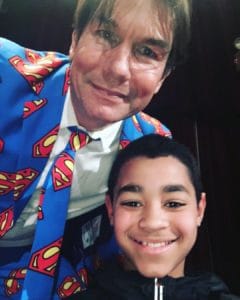 Jerry O’Connell/Superman & Will. Jerry was super gracious and I thank him for indulging my boy.Not every kid gets to meet Superman!

“The Death of Superman” is one of the most revered comic book stories for a reason. Superman’s showdown with Doomsday resonated with so many not because of the awesome splash pages of the beating he took.

It made The Man of Steel vulnerable in a way we never truly experienced to that point. He became one of us, by truly facing his own mortality. He met his end with grace and selflessness all hope they can muster when the time comes.

This gave his death the emotional weight it demanded, set the stage for the chaos of “A World Without a Superman” during the “Reign of the Supermen” that made the Last Son of Krypton’s inevitable resurrection truly satisfying.

Now, after completing both films, I can say this third animated re-telling of “The Death of Superman” is head and shoulders above the others. This is an epic, touching, fresh interpretation.

It’s such an honor to play her [Lois], and an honor being the only non-superhero in the movie. Her superpower is truth seeker. She’s a journalist. And uncovering the truth is where her power lies. It’s really fun to play the badass side of her that comes out.

One caveat to parents.

The first film, “The Death of Superman” is tonally very different than “Reign of the Supermen” the first film was an unusually bloody affair in comparison to the typical Warner Bros. / DC Comics Animated feature. Much more intense action and people are graphically killed. I would watch it first before deciding to let younger kids see it.

That being said, my 9 and 11 year old have seen it, to no ill effect. Ms.Romijn asked my daughter during the Q&A if she’s seen both films (she hadn’t until Wednesday night) and confessed she’d shown “Death of Superman” to her own 10 year old daughter’s, that they cried, and joked about her and Jerry being horrible parents. 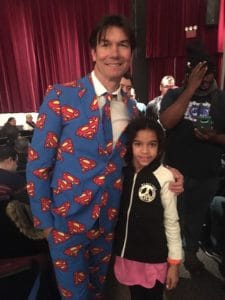 Though the story arcs are interlinked, I will concentrate on Reign in this review.

“The Death of Superman” was heavily centered on Jerry O’Connell’s hopeful and emotionally resonant Clark coming to terms with his double life. He wavers about revealing his secret identity as their budding romance matures.

Like all of us, the most powerful man on earth is powerless in the face of love.

“Reign of the Supermen” is very much Lois’ story. Lois is mourning Clark while driven to uncover the mystery of these Supermen. She is portrayed deftly with agency, humor and touching pathos by Rebecca Romijn.

Lois’ grief is palatable, learning the truth about Clark’s secret identity only hours before she lost him battling Doomsday. Six months later, she channels her pain to learn the truth once four new players, claiming Superman’s Legacy, appear upon the scene.

She is determined to get to the bottom of it come hell or high water!

Directed by veteran Producer/Director Sam Liu, from a terrific script by screenwriters Jim Krieg (Batman: Gotham by Gaslight) and Tim Sheridan (Scooby-Doo and the Gourmet Ghost) 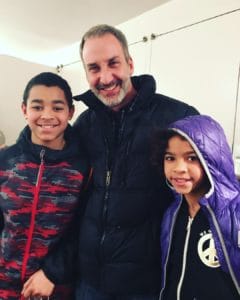 executive produced by James Tucker (Justice League Dark) and character designer Phil Bourassa (Young Justice/Young Justice Outsiders). “Reign of the Superman” serves a unique, entertaining adventure, all while paying homage not only to the 1993 Comic Arc but embracing other beloved canonical sources like Richard Donner’s Superman the Movie.

I personally never thought any actors could recapture the “lightning in the bottle” chemistry between Margot Kidder and Christopher Reeve, until I experienced the magnificent performances of Romijn & O’Connell. Made even more impressive by the fact that they performed their scenes totally isolated from each other. 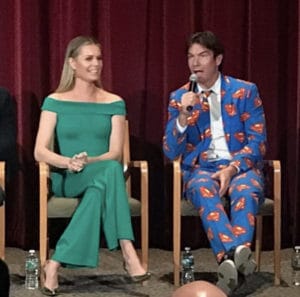 We learned this tidbit during the Q&A panel after the “Reign of the Supermen” East Coast Premier on Monday at the Directors Guild Theater.

Here’s my daughter, who was furiously taking notes during the film, and who’s new hero is Rebecca Romijn/Lois Lane, asking a question of Jerry and Rebecca at the Q&A Panel.-

One scene that everyone in attendance agreed was pivotal was the rooftop scene between Cyborg Superman and Lois, which mirrored Superman the Movie for some of the same emotional beats.

In the ’78 film, Lois’ first interview cemented the Superman/Lois relationship and in Reign, it plants a seed of hope for Lois “Could this truly be Clark?” And, no spoilers, tees up some seriously tragic third act events because of our emotional investiture in these characters.

In this scene, Cyborg Superman visits Lois and confronts her about her reporting, how it affects him that she now looks at him like “a monster” and hopes she can, whether she believes he’s the original or not, at least believe he’s someone who wants to do good. “Try to write about that.”

Such smart dialogue and nuanced delivery by the voice actors you rarely see in other animated features and is a testament to the depth of work produced by Warner Bros. Animation.

I remember when we were casting, [for Lois] we already had you (Jerry O’Connell) as Superman and we were trying to figure out who might have good chemistry with you….Bingo!

I refuse to give any more of this story away. It’s a MUST SEE and once you see the film. It’s worth watching the panel.

I’ve been to countless press junkets and covered hundreds of panels. But what my kids and I experienced on Monday night, that was something special.

It was joyous, organic and electric the way members of the press, fans, creatives and talent, some of the best at what they do in the business, basically geeked out discussing why this big-but-small Superman story is so important to them. 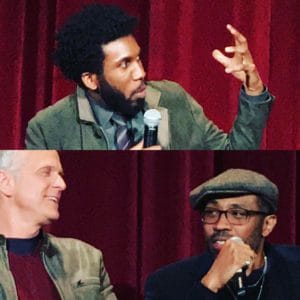 And as a long time Supesfan.,knowing how enduring Superman is as a symbol of hope and that the characters true power is his goodness being “the light that shines the way”. 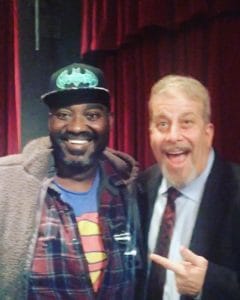 This will be here when you’re done!

Consider subscribing to my channel! And picking up a copy of “Reign of the Supermen” from Warner Bros. Home Entertainment now available on Digital, on Ultra HD Blu-ray Combo Pack and Blu-ray Combo Pack, you won’t be disappointed. follow and use hashtag #reignofthesupermen on social media to be part of the conversation! 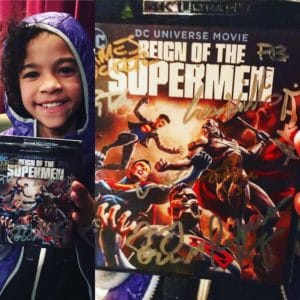 Her great Q&A panel question to Rebecca & Jerry about being a real-life couple working together earned Ms. J her latest prized possession. “Reign of the Supermen” Blu-ray Combo Pack signed by the talent and creatives!!! 😮

Reign of the Supermen finds Earth’s citizens – and the Man of Steel’s heroic contemporaries – dealing with a world without Superman. But the aftermath of Superman’s death and the subsequent disappearance of his body leads to a new mystery – is Superman still alive? The question is further complicated when four new super-powered individuals – Steel, Cyborg Superman, Superboy, and the Eradicator – emerge to proclaim themselves as the ultimate hero. In the end, only one will be able to proclaim himself the world’s true Superman.