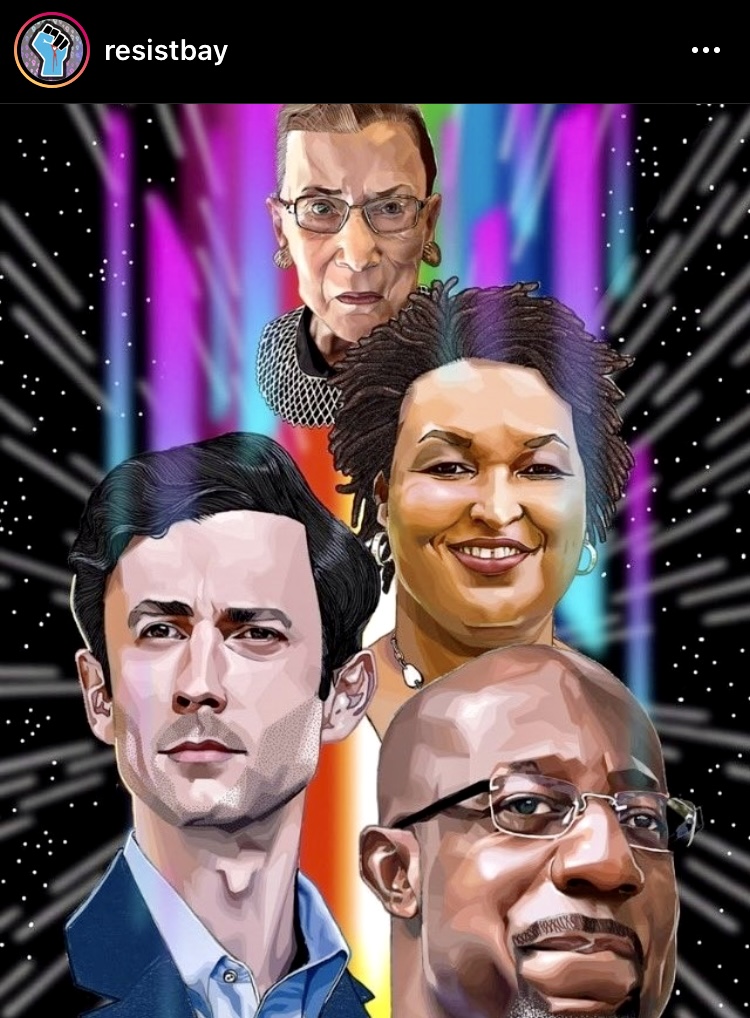 At first, I was angry when I saw how they treated the insurrectionists at the Capitol. – Behold.

white privilege is violently storming and looting the capitol,tearing down the USA flag and putting up a trump flag instead.then simply getting sent back home while having a swat team hold your hand while you walk slowly down the stairs… #WashingtonDC#whiteprivilege#Capitol pic.twitter.com/4FUQEGIdAl

I’ve seen and said myself. “If black folks stormed the Capitol, we’d be dead.”

Then, I had a moment of clarity. Black folks DID Storm the Capitol today. With our votes.

I refuse to let these idiots spoil my good mood. We won. They lost. And it’s eating them up. That a black man and a Jewish man won thanks to a black woman in the heart of the old confederacy says something.

We gonna keep on keepin on. They can’t stop us. I pity them and their children who desecrated the Capitol for a man not worthy of even our contempt.

Rep Omar is drawing up articles of impeachment as I write this. Let’s see who the real Patriots are.

We voted to get Joe Biden and Kamala Harris elected. And ensured  our agenda could succeed by winning Georgia’s senate seats. I didn’t need to see more dead black bodies on the evening news.

The good people of Georgia voted in record numbers that proved it wasn’t a fluke. Georgia is blue. Not only to get rid of Trump, but to chart a new course, a new South.

A coalition created by Stacey Abrams that was victorious when nobody thought it could be.

The only headline worth mentioning today is a black woman helped a black man and a Jewish man become the Senate delegation from Georgia, of all places, in the heart of the old confederacy. John Lewis went to his grave believing this was possible.

In 1964, not that long ago, three civil rights workers — two Jewish and one black went missing while in Jessup County, Mississippi, organizing a voter registry for African Americans. They were murdered for trying to accomplish what happened in Georgia today.

This means something. This is truth.

THIS is the America I want for my children and grandchildren.

The pity is misguided angry white folks who were rilled up and lied to by a man they trusted, didn’t take stock of where they were.

The history of the place, not a mile from the Capitol, is the very spot in front of the Lincoln memorial across from the Washington Monument where Dr. King delivered a speech that changed the world.

Let us not wallow in the valley of despair, I say to you today, my friends.

And so even though we face the difficulties of today and tomorrow, I still have a dream. It is a dream deeply rooted in the American dream.

I have a dream that one day this nation will rise up and live out the true meaning of its creed: “We hold these truths to be self-evident, that all men are created equal.”

Dr king changed the world with the

“I have a Dream Speech”

without firing a shot or throwing a punch. Civil disobedience and non-violence won the day then. And will now.

His work, and the work of others, Congressman Lewis and thousands of others famous and forgotten, carried the movement along.

Good people of all faiths, no faith and every gender, creed & color harnessed by Stacey Abrams efforts, made today’s victory possible,as I wrote about in my article entitled-

Today. Trump supporters allowed hate and passion to overcome good sense. After all, nothing they did would change the outcome of the 2020 election.

It’s only a ceremonial count. Now a woman is dead. For absolutely no reason. Airings of grievances is perfectly American. This was not protected speech. It was insurrection.

President Elect Biden rightfully called out Trump for his rhetoric that led directly to this poor woman’s death.

I can’t abide a man this unfit to lead our nation another instant. And I don’t wish anymore bloodshed. Pence should take over immediately. Trump should be removed from office.

Violent insurrection is not Patriotism.

MAGA or not. The woman who was killed, Ashley Babbit, an Air Force Veteran & Trump Supporter, was someone’s daughter, wife or mother.

She died over a lie. It’s heartbreaking. And I’m glad I can feel for her, because it means I’m not too far gone, I’m still human.

Recognizing our shared humanity in my humble opinion, is how we get past the old hurts and overcome Covid, inequality and get through this crazy time of change. It’s how we heal and grow and move forward as a nation.

If MAGA truly has right on its side? Fans of Democracy and patriotism? They could have chosen to protest. Peacefully. I’ve heard enough of them complaining about poor black folks looting a Target. What did this accomplish? At least they could have walked away with a TV at Target.

They could have chosen to preserve what they say they love. Democracy, the U.S. Constitution, housed within the place they defiled to take selfies in.

That’s not love, that’s not patriotism. I don’t want to hear another word about the “Antifa” bogeyman. THEY are the threat to democracy.

Hundreds of thousands of DC residents had to endure a coup in their backyard today, go into curfew at 6pm, and fear for their personal safety. None of them have any representation in Congress.

They despoiled the very chambers they claim to hold dear. Yes, I agree black protesters would have been treated harshly. Much more severely. But that’s not how we roll. We’re too smart for that. We grown. There is no endgame in smashing “The People’s House”. That’s OUR house.

Hate and division is the currency of the Colonizer. Not ours. My people? We got here through love. Love is the only sure fire weapon against hate. Dr. King said,-  “I choose love, because hatred is too much of a burden for me to bear.”

Loving our people and our culture and community is how we survived Chattel slavery, Jim Crow, Mandatory minimums, whatever could be thrown at us.

Love is what fuels the ongoing fight for Civil Rights and Racial Justice. Black Lives Matter is all about loving our people. Acknowledging human dignity and our shared humanity.

Love is how we “Keep on keepin’ on” without getting sidetracked or distracted. This “insurrection” shit show has ZERO to do with us. That’s between White America & MAGA.

Let us know how it turns out.

Problem is, racism is so endemic in American life, protesting racism looks like protesting America. Coiln Kapernick still can’t work because he took a knee. What happens to all the White insurrectionist that stormed our Capitol?

Surely, an angry white mob attacking a joint session of Congress is no way to be a patriot. Unless there is a different definition for Patriotism I’m unaware of.

How can Kapernick’s silent respectful kneeling protest be “unpatriotic” and white terrorists vandalizing the U.S. Senate threatening Congressional members be “patriotic”? Anyone?

Black folks have always loved America much more than she loves us. Instead of trying to understand White supremacists motivations. That’s clearly not getting us anywhere, I’d rather we switch to looking at Black Patriotism.

Black Americans are arguably the most aggrieved people on the planet, yet the first to stand up and defend democracy and her institutions. Voting rights, Free Speech, the tools Democracy provides we use to liberate ourselves not hurt others.

We believe in the hope of a brighter tomorrow for our children which is what everyone wants. Yet as bad as we’ve been treated, we don’t want revenge, all we want is our fair share. And STOP KILLING US. That’s it.

Black people can NEVER out hate MAGA. That’s not us. Hate is exhausting and makes you stupid. We can never out hate White America not in a million years. Nor, should we aspire to. All that will do is destroy us.

Hatred is drinking poison to kill your enemy. But I do know, for damn sure, we can out love them.

And THAT’S how we win.