This film, Batman vs. Teenage Mutant Ninja Turtles, the latest addition to DC’s unmatched animated movie canon, is a love letter to old school and new fans of both franchises and though the setup is simple, begs for a continuation of this shared universe! 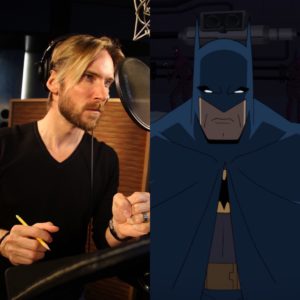 It was released on Blu-ray and Digital HD June 4, 2019. In the film, Batman, Robin and Batgirl team up with the Teenage Mutant Ninja Turtles to save Gotham City from the Shredder and Ra’s al Ghul. 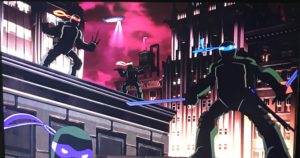 Our story so far-

While touring at Powers Industrial, Barbara Gordon witnesses a powerful generator being stolen by the Foot Clanand also spots four mysterious creatures during the robbery that she believes are metahumans. She informs Batman, who fights the Foot Clan at Wayne Enterprises before he is defeated by Shredder. (Epic fight) The four metas Batgirl spoke of are actually the TMNT, who have arrived in Gotham to stop Shredder’s schemes and find out who his new ally is. After defending Wayne Enterprises from Penguin, the Turtles meet Batman in an alley and proceed to fight as both sides believe the other is working with Shredder. The Turtles are forced to retreat when Batman proves more experienced in combat.

Tapping hard on the 4th wall

The Turtles being snarky teenage boys basically, have a running commentary about everything you’ve wondered about and how preposterous Gotham City is! It’s nearly Deadpool level! They bang hard on the 4th wall but never actually break it (no spoilers, but there is a nod to Knightfall I adored)

Raphael (Darren Criss), Michelangelo (Kyle Mooney), Donatello (Baron Vaughn), and Leonardo (Eric Bauza) are fine voice actors that capture the humor and self awareness of current Nickelodeon iteration of Team Turtle on Nickelodeon. Mooney’s Mikey in particular does a great job marveling at GCPD’s state of the art Blimp technology “Does New York have mad blimps flying around? I mean, what are they even for? I LOVE EM!” Hilarious!

But the bread and butter of a film featuring ninja-trained anamorphic turtles reaming up with a ninja-trained master of martial arts fighting ninjas is well, FIGHTING!

The fights are spectacular! Whomever choreographed the fight scenes in this production is the MVP! I’ve never seen such effortlessly amazing fights in an animated film. Batman’s mastery of dozens of martial arts and the unorthodoxy in his fighting technique and the Ninja Turtles more traditional ninjitsu styles are highlighted terrifically!

Shredder, the Foot Clan, Ra’s al Ghul, Harley Quinn, Poison Ivy, and Mr. Freeze and most of Batman’s rouges gallery show up for the brawl as well!

But special mention must go to Troy Baker who’s pulling double duty. The first actor to voice both Bruce Wayne and the Joker and both are excellent portrayals of what fans embrace that both are opposite sides of the same coin.

Here’s Baker on getting cast to play both Batman & Joker.-

Batman vs Teenage Mutant Ninja Turtleswas released to positive reviews. Based on eleven reviews collected on Rotten Tomatoes, the film has an approval rating of 100% with an average rating of a 7.3/10

With an ending that lends itself to continuing this madcap tale, there is a clear hope for a sequel to this remarkable crossover adaptation! I hope it does well financially so that this becomes a new franchise! Produced by Warner Bros. Animation, Nickelodeon and DC, the film is currently available from Warner Bros. Home Entertainment on Digital, 4K Ultra HD Combo Pack and Blu-ray Combo Pack.

Batman vs. Teenage Mutant Ninja Turtles is a A MUST OWN in the long line of stellar Warner Bros. Home Entertainment / Warner Bros. Animated DC comic book adaptations!

Facebook67TweetPinEmailShares67
wpDiscuz
Share this ArticleLike this article? Email it to a friend!
Email sent!