The Five Points Festival, is a designer toy and comic convention and lands on Pier 36 in Manhattan’s Lower East Side the historic “Five Points” district you might remember from Martin Scorsese’s “GANGS OF NEW YORK”. (And you’ve just had a history lesson!) Five Points Festival is excitedly announcing an exclusive production Dunny designed by Gary Ham, set to release at Five Points Fest, May 20th-21st!

The Five Points Festival features a dynamic lineup of counterculture artists and artisans from around the world.  Enthusiasts familiar with art toys will have the chance to meet some of the world’s most iconic artists and brands like Huck Gee, Kidrobot, James Groman, Jason Freeny, Ron English of Popaganda, Simone Legno of Tokidoki, Super7, Tara McPherson, and Mighty Jaxx on the show floor, where they will be featured alongside artists from the U.S., Japan, Germany, Korea, the U.K. and elsewhere, some showcasing in NYC for the first time, and all with unique, original pieces for sale.

The festival’s ‘Artist Alley’ will be an intimate, curated showcase of some of the most notable comic and toy art from mainstream and independent creators across the world’s emerging pop art scene – with participants including Annie Wu, Bryan Lee O’Malley, Cliff Chiang, Khary Randolph, Magdalene Visaggio, and Sean Gordon Murphy. Anyone who has attended mainstream art shows or comic cons will find something completely unique at Five Points – a gathering of visual innovators, rebels, creators and the misfits who are driving the future of commercial, counterculture art.

So who the heck is Gary Ham? Why should I care? Glad you asked! With a deft hand and a keen eye for character, Gary Ham quickly established himself as a unique voice in the pop and toy art world. His characters 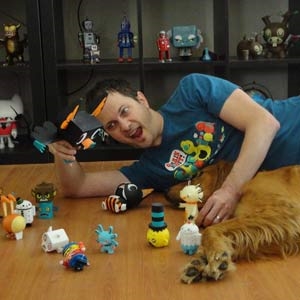 Artist Gary Ham at play
(He’s one of us)

and illustrations evoke a bold, 1960s animation style of delivery while still maintaining a modern sensibility. His ability to present the appeal of nostalgia without relying on the past is uncanny, and fine art collectors are just as eager to snap up his work as toy collectors.

Available in three colors, and limited to 1000 pieces total (across the three versions), the Ghost Rider inspired design is the first production Dunny created by Gary Ham released into the world!

Limited to just 250 pieces total. This is the ONLY way to secure this colorway, making the VIP package extremely sought-after!

NOT ONLY THAT… the Five Points VIP Ticket also includes;

A VIP Preview/Early Access – Get in an hour early both days to get first dibs on show exclusives – and you know there will be a ton!
Designer Toy Awards VIP Ticket – Party with Designer Toy Royalty at the prestigious 7th annual Designer Toy Awards on Friday, May 19th. The ONLY way for the public to get access!
Saturday Night Party – VIP Access to the Saturday Night shindig, ran by Sonic Boombox – Think cosplay, video games, and live art! Not one to miss.
Exclusive Badge – With swank art just for VIPs
Private Entrance – Roll in from your own entrance – PIMPIN’

The two other colorways will be available to purchase at the Clutter / Five Points booth #243 for $14.99 apiece!

The inaugural event is a celebration of comic artists and writers, toy designers and customizers (with an extensive Neo-Kaiju and Sofubi section), original street art, gourmet food trucks and craft beer presented by Clutter Magazine, Midtown Comics, and sponsored by Playcrafting.

I hope to see you there poppin’ your collar in the V.I.P!

For a current list of vendors and guests, please visit: http://fivepointsfest.com/exhibit-space-2/#exhibitor-listing