Get Daily Email
Join/Login CLOSE
Home / All Things Geek / Mandela and the General by John Carlin and Oriol Malet A MAJOR ORIGINAL GRAPHIC NOVEL FROM THE AUTHOR OF INVICTUS ABOUT NELSON MANDELA!

Today Nelson Mandela is an international icon: the first leader of the new South Africa, an anti-apartheid hero and a universal symbol of justice. But in 1994, Mandela’s nonviolent struggle for equality very nearly spiraled into an all-out war that would have only ended in “the peace of graveyards.” 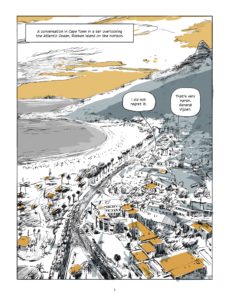 As the first post-apartheid elections approached with South African blacks poised to take power, the nation’s whites feared reprisal. White nationalist militias claiming 50,000 well-armed former soldiers stood ready to fight to the death to defend their cause. As tensions throughout the country mounted, Mandela began to meet and strategize with the unlikeliest of political allies—General Constand Viljoen, former chief of apartheid South Africa’s military. The two leaders met in secret, in the hopes of keeping their followers and radical fringe elements from acts of violence. Despite the misgivings of their advisers, the two men put aside their differences for the good of the country. This fall, Plough Publishing will presents MANDELA & THE GENERAL an original graphic novel about this seminal moment in world affairs, by John Carlin, the author of INVICTUS, and the acclaimed artist Oriol Malet. 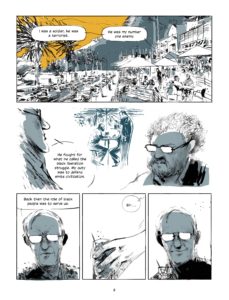 In advance of the book’s publication on November 4, this major graphic novel is generating accolades from artists, writers, actors, and actors:

“A simply wonderful book. Mándela and the General suspensefully reveals how Mandela’s spirit of reconciliation prevailed over fear and violence in post-apartheid South Africa.  John Carlin’s privileged access makes this an especially exciting read. Coming out as it does at a time of gathering global intolerance, this book is a timely reminder of the value of human empathy as a tool in political confrontation.” — Jon Lee Anderson, author of Che Guevara: A Revolutionary Life 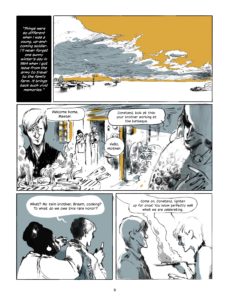 “John Carlin elegantly crafts a powerful, balanced narrative well served by the evocative imagery and sequential talents of Oriol Malet. Mandela and the General is an important read for all who seek peace.” — Andrew Aydin, co-writer of the National Book Award-winning March 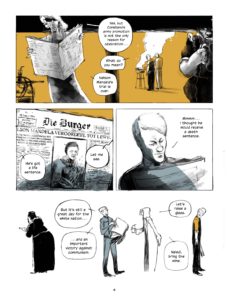 “Incredibly engaging and well worth your time. The art by Oriol Malet has so much energy and beauty that it drew me in immediately.” — Jamal Igle, illustrator of Black, creator of Molly Danger

“Wonderful, accessible distillation of the genius of Mandela. In an increasingly divided political landscape, should be required reading for people of all ages everywhere.” — Academy Award-winner Matt Damon

“At the core of Mandela and the General is the notion that reason and empathy are the foundations of progress and peace.” — Vita Ayala, writer of The Wilds and Livewire

“Excellent…a well-told, perceptive view of both sides in the conflict.” — Foreword Reviews 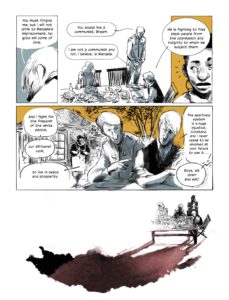 “A must-read for US Americans in our current era of cultural conflict – Mandela and the General reminds us of what can be achieved when we view each other as human.” — Kwanza Osajyefo, co-writer of Black

I already have my editorial review copy so look for my review and an interview with the creators of this incredible true story in an upcoming All Things Geek!