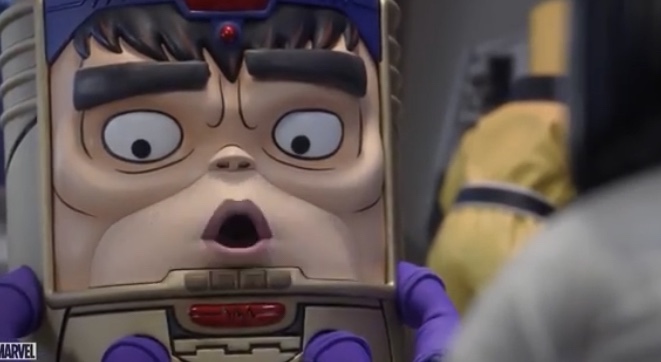 What do supervillains do when they aren’t plotting world conquest? They have lives and family issues just like you and I.

Imagine a “stop-motion Arrested Development” where Micheal is a mutated, psionic powered, super genius running an evil Google (or just Google) and you’ve got the format of the show!

Matter of fact the Infinity War / Endagame directors started on television with Arrested Development and there is much synergy between the two shows.

BACK UP, WHAT THE HELL IS A MODOK? 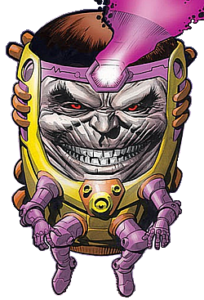 He’s been a main foil of The Avengers since the silver age.

While successful, this experimentation results in a freakishly overdeveloped head, causing the character’s signature look and use of a flying chair for mobility. After the experiments, he rebels against his masters and takes control of AIM.

Debuting in the Silver Age of Comic Books, MODOK has appeared in over four decades of Marvel continuity, and starred in the miniseries Super-Villain Team-Up: MODOK’s 11 #1–5 (cover-dated September–December 2008) and a self-titled one-shot issue MODOK: Reign Delay #1 (Nov. 2009).

NOW FOR THE SHOW!

Co-created by Patton Oswalt and Jordan Blum, MODOK is one of the few surviving Marvel shows in the wake of Marvel Studios one again gaining control over television. Originally, there were numerous Marvel shows coming to Hulu, MODOK among them, but now it’s basically just this one (and the soon-to-debut Helstrom). Take a look at Emergency Awesome’s trailer video-

The complete voice cast for M.O.D.O.K., which is being touted as “Marvel’s first endeavor into animated comedy geared towards adults.” As previously announced, Patton Oswalt will voice the title character, the fan-favorite Marvel villain who, in this show, goes through a midlife crisis after his supervillain endeavors fail and he’s forced out of the leadership of his evil company, AIM.

On the panel, Blum and Oswalt said that Marvel was very open to letting them use lots of different characters and ideas from the whole history of comics.

That includes Mutant references and X-Men specific jokes. They never expected Marvel to OK this, but they did. It’s animated in stop motion by the same company that does Robot Chicken, Stoopid Buddy Stoodios

I cant wait for more updates on what appears to be Disney Plus answer to the awesome very adult DC Universe’s Harley Quinn series now on HBO.