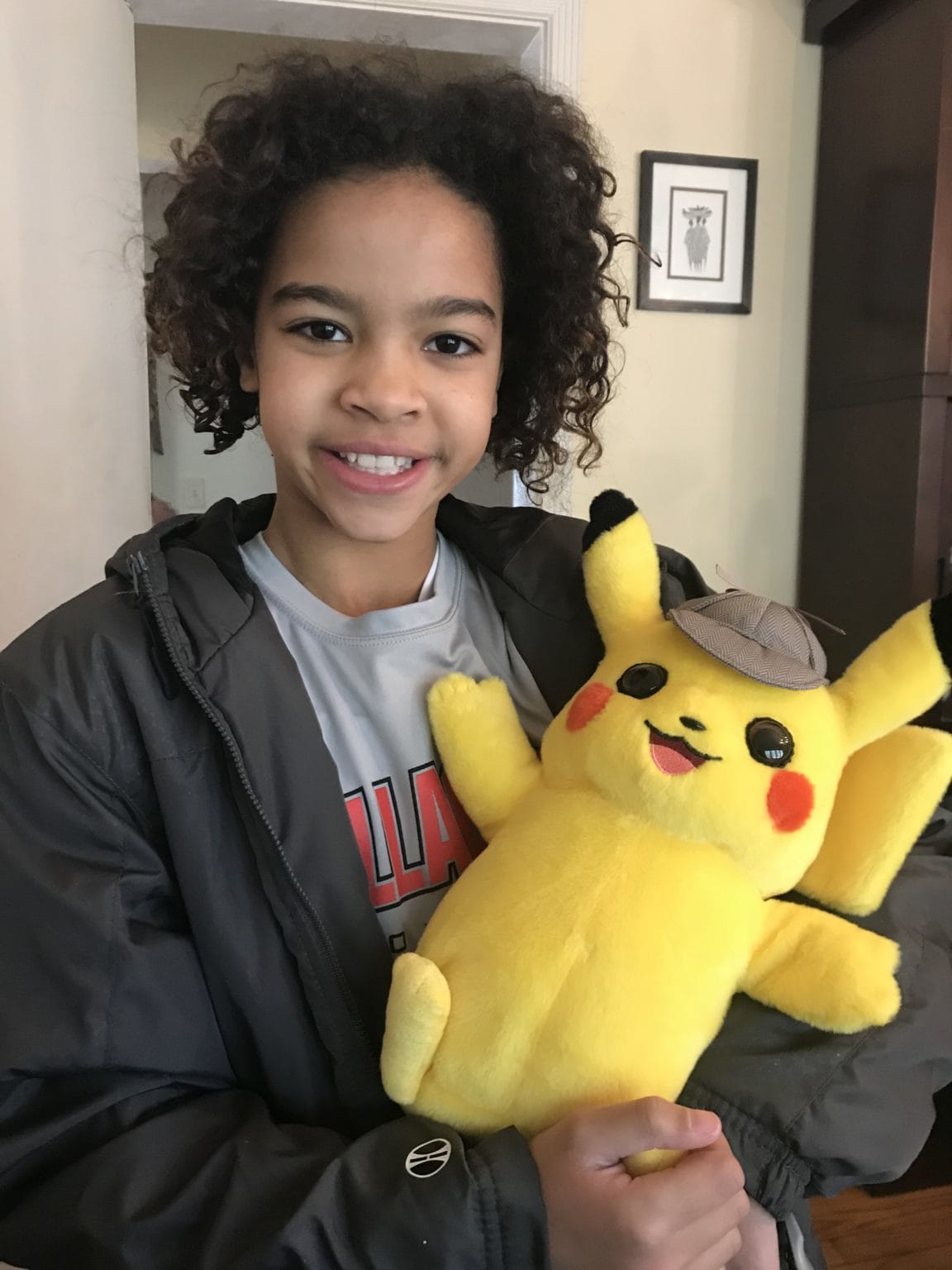 Pokemon Company International and Wicked Cool Toys have unveiled a full line of Detective Pikachu products, including toys, apparel, Pokemon Trading Cards and this remarkable Detective Pikachu plush that my daughter and her friends love!

He comes with 14 responses, motorized ears, a detective’s hat, and two voice modes: Detective Pikachu (voiced by Canadian Actor Ryan Reynolds more on that later) and a standard Pikachu. (Pika-Pika)

In the upcoming film, it’s been two months since Tim Goodman’s father went missing while on a case in Ryme city, and this teen takes it upon himself to find out what happened.

Tim runs into Detective Pikachu a snarky adorable rogue and realizes he’s the only one who can hear the Pokemon speak.

Their special circumstance is a big underlying mystery of Detective Pikachu, and it lends to funny moments between the two early on as they try to hide their conversations.

With their bond formed, Pikachu teams up with Tim to find his father.

As excitement continues to build toward the May 10, 2019, theatrical release of POKÉMON Detective Pikachu Wicked Cool Toys is supplying this substantial movie tie-in and collector’s item at select retailers!

In this hilarious clip, “Detective Pikachu” Ryan Reynolds sits down for an interview on “Outside the Actors Studio” to talk about how he got into the titular role.

In the hilarious clip, Reynolds describes how he “spent the entire year” in character as Pikachu to fully inhabit him on screen.

I was on my way to pick up my daughters from school when I heard that I got the role. I didn’t show up at [the] school because Detective Pikachu, he doesn’t know who those two little girls are,” Reynolds says. “Who are they?

Available from @wickedcooltoys POKÉMON DETECTIVE PIKACHU can interact with you just like in the movie!

My daughter and a friend enjoyed the unpredictable responses from the articulations of Pikachu’s ears and motions and voice actor Ryan Reynolds deadpan delivery amuses them to no end.

The funniest line ever- “Nice work kid, maybe there’s a little detective in you after all!”

This plushie seemed to be sensitive to motions or movements near it, it would deliver one-liners unbidden at times and the spontaneous chit chat was very much in character for Ryan Reynolds who’s irreverent humor really takes this toy to another level.

With the resurgence of POKEMON in all aspects of media, coupled with Ryan Reynolds massive mainstream & geek following, this toy is potentially this summers most sought after movie tie in collectible!

This is an exceptional collectible movie tie in for Pokemon fans in general and Pikachu fans in particular. The actual voice of Reynolds and the quality of the details on the soft sturdy plush make it a great value and it’s safe for kids 3+ who will be delighted with an interactive friend straight from the film!

I highly recommend picking up POKÉMON Detective Pikachu Talking Plushie! Look up wickedcooltoys.com to find out availability for this and other POKEMON Products available now and the coming months!