Celebrated publisher of premium graphic novels and art books Magnetic Press has announced the upcoming release of THE MONKEY KING, a fresh retelling of the classic fantasy tale “Journey to the West.” Colorfully visualized by artist Chaiko, this faithful adaptation follows the many exploits of the divine monkey Sun Wukong from his birth from a stone to his epic quest to find the sacred Sutras. Described as a “Wushu Wizard of Oz,” this timeless saga inspired centuries of stories and scoundrel heroes to follow, including popular anime favorites such as Dragon Ball and Naruto.

Originally published anonymously in 1592, Journey to the West grew in popularity throughout Ming Dynasty China despite the fact that fantasy fiction at the time was considered “vulgar” and not true literature like the classical works of previous dynasties. It wasn’t until centuries later that, through textual analysis of other works from that period, scholars came to believe the original author to be novelist, poet, and politician Wu Cheng’en (also known as Ruzhong). Certain use of regional vernacular from Wu’s hometown and a familiar “defiant spirit” in the Sun Wukong character have led most scholars to conclude that he is the most likely author of this legendary classic.

To capture the scope of this legendary epic, the complete tale will be presented in 320 beautifully illustrated pages by Chaiko (pen name of author Cai Feng), who captures the dynamic action, attitude, and humor of the original text in an almost animated style sure to please comic book, manga, and anime fans.

Set for release in March 2023, the graphic novel will be offered in three formats, two of which will be exclusive to a pre-order campaign launching on Kickstarter Tuesday October 18th. A trade edition collecting the complete 320-page saga into a single 6.5×9” paperback will be solicited for retail release, while fans and collectors will want to grab the limited edition 8.5×11” hardcover diptych or deluxe foil-stamped slipcase set available exclusively through the Kickstarter campaign.

Journey to the West is arguably one of the most popular fantasy stories in the world,” says Mike Kennedy, Magnetic Press’s Publisher, “yet aside from being passingly familiar with the Sun Wukong character (or more specifically his famous nickname ‘The Monkey King’), surprisingly few westerners really know the story itself. While there have been countless adaptations in nearly every medium and language known, this new graphic novel retelling by Chaiko is instantly accessible and incredibly fun. If the only thing you know about The Monkey King is his famous title, it’s time to witness the original adventures that made him a legend for so many centuries.

Fans can pre-order the various editions of the book during the Kickstarter campaign which will feature an array of additional limited, campaign-exclusive bonus items including numbered bookplates, linen cardstock art prints, a golden 2” metal coin, and an exclusive 24-page production art book by Chaiko. Other bonuses and stretch goals, including material upgrades to the books themselves, will also be unlocked throughout the campaign.

Fans are also encouraged to visit http://www.magnetic-press.com/early-access-monkey-king/ to pre-register for the campaign and to receive an exclusive 8.5×11” linen cardstock print by Chaiko added to their pledge for FREE.

The trade paperback book will retail for $29.99 while the limited hardcover set will only be available directly for $60. Only 500 copies of the deluxe slipcase will be produced for this campaign with a pledge price of $80. All physical editions will include a digital copy as part of the campaign. 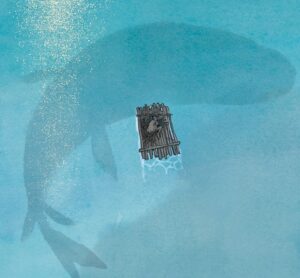 The limited pre-order campaign will run for only 18 days on Kickstarter, ending Friday November 4th at 5pm CST. The books will ship to backers in March 2023.

Fans can bookmark the Kickstarter campaign to be notified of launch by visiting https://www.kickstarter.com/projects/neurobellum/the-monkey-king-graphic-novel-saga-by-chaiko

Magnetic Press is a subsidiary of Polarity that publishes graphic novels, art books, and periodicals curated with a focus on internationally recognized content and talent, presented with premium quality design and production value. The Magnetic brand was founded by writer and video game veteran Mike Kennedy in 2013 as the independent publishing company Magnetic Press, Inc, featuring creators both new and established from around the world, sharing their stories with an English-language audience often for the first time. Their award-winning library includes such celebrated titles as the Love series of wordless wildlife graphic novels, as well as Eisner-nominated books Mister Invincible, Pistouvi, Irena, Stay, A Sea of Love, Watersnakes, Herakles, Doomboy, A Glance Backward, Little Tails, The Ghost of Gaudi, and Dave Dorman’s Wasted Lands Omnibus. Magnetic has earned a total of 23 Eisner Award nominations in their first six-of-six years of eligibility. Magnetic also won the Gold Medal of Excellence in the graphic novel category of the 2015 Independent Publisher Awards for Love: The Fox.

In 2021, Magnetic launched Magnetic Press Play, an imprint dedicated to gaming and new media endeavors, with their first release to include Carbon Grey The RPG, based on the Image Comics series by Hoang Nguyen, using their proprietary D6MV variant of the classic D6 Roleplaying Rules created by West End Games.

David Steward II’s Polarity is a diversified global media company with a mission to bring authentic content to a diverse global audience. To create a richer content experience and offering, the company believes in the value of embracing diversity and highlighting previously unheard voices, as well as new and emerging views and voices. In addition to Magnetic Press, the Polarity portfolio also includes Lion Forge Animation, Oni-Lion Forge Publishing Group, and Illustrated Syndicate.

With broad operations in animation, publishing and general media, Polarity has established itself as an impactful force in the entertainment industry. Steward II has been putting resources behind his vision of expanding the market for comics and comic-related pop culture to new age groups and demographics since the early 2010s, building a portfolio of titles and imprints that feature characters and creators from a wide variety of backgrounds. He’s extended that vision and ethic to the larger media landscape with an organization that can orchestrate content development, production, financing, and distribution across different channels.

Need more info? A complete list of benefits is here</a