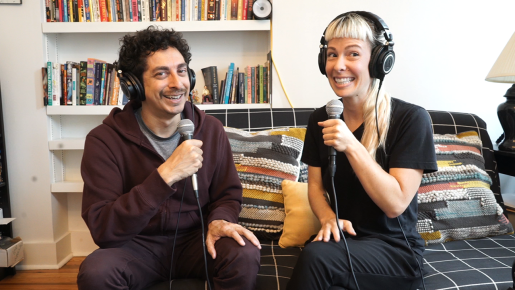 Would you rather run out of toiler paper or be quarantined with your ex? These two hosts don’t really have a choice.
Amber Rollo and Gabe Pacheco are two comedians who used to be engaged. Now they are quarantined together. They are binging shows to pass the time and keep the peace.
Quarantined comedians and recent ex-fiancés Amber Rollo and Gabe Pacheco are releasing the first episode of their brand new podcast, The Next Binge Thing, on Thursday, March 26th. Due to the recent stay-at-home order, Amber and Gabe are stuck quarantining in the same New York City apartment.

To pass the time and keep the peace, they’ll be binge-watching the latest shows and newest releases from opposite ends of their railroad-style apartment. Listen or watch The Next Binge Thing each week as Amber and Gabe talk about what show they binged, how they are coping and who is still peeing with the door open. Episodes will available on Libsyn, Spotify, iTunes, iHeartRadio and Stitcher. They will also be releasing video of the podcast on Patreon.
Aside from a Zoom calls with friends and family and trying to up their cooking game, Amber and Gabe’s self-isolation schedule is pretty open. With time on their hands, each week they’ll be watching and discussing the hottest new shows and updating us on how they are navigating this new reality of their relationship, in their very unique and less-than-ideal situation. The Next Binge Thing is more than a TV podcast. It’s a much more personal experience. It’s a test on relationships, communication skills, and the ability to keep themselves entertained during this time of sequestering.
In terms of TV-watching styles, Amber and Gabe are very different. Amber is more about quantity-over-quality, while Gabe is the opposite. Amber is well-versed in binge-watching, often playing marathons in the background while doing other things. Gabe says he frequently hears the Curb Your Enthusiasm jingle coming from Amber’s side of the apartment. Meanwhile, Gabe is more selective, typically choosing political podcasts and Youtube video essays for his binge of choice. Amber says Gabe is better at paying attention and remembering the details of shows than she is.
While dating Amber tried to get Gabe to start a podcast, but with their sketch comedy, standup showcase, and personal relationship, Gabe worried that they were doing too much together. It wasn’t until after they broke up and found themselves stuck quarantining together that Amber pitched the idea once again. For support, she took her idea to Twitter and asked her followers if she and Gabe should start a podcast. After an overwhelmingly positive response and their other projects being put on pause, Gabe was more willing. So he put the idea out to his own followers and Amber was right. People loved the idea.
Listen to The Next Binge Thing every Tuesday and Thursday available everywhere you listen to podcasts or watch on Amber’s Patreon.
ABOUT AMBER ROLLO 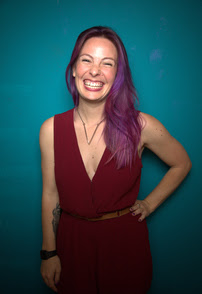 Amber Rollo is a California girl who moved to New York in 2010. Her standup has a dark New York edge with a sunny California smile that makes her a joy to watch no matter the topic. She has earned the title “Downright Rude” by confronting Harvey Weinstein when he showed up at a variety show in Manhattan, HW’s spokesperson described her actions in that way and she has worn those words as a badge since. She was recently a guest on Full Frontal with Samantha Bee to comment on that interaction.
She is the creator and co-host of Stoked Comedy (with Kelly Bachman, Davidson Boswell and Julie Piñero) in Brooklyn and co-host of Gilligan Comedy, a pop-up comedy show with Gabriel Pacheco.
Though standup is her first love she is also a musician and actor, she the drummer in Boys Drool (a moody band made up of four comedians) and is a cast member of the sketch comedy show Sofa Kingdom. She is the Co-Host of Daddy-less Issues: The Orphan Podcast, with Chanel Ali, where they talk to comedians and artists who have lost one or more parents about how they succeed in life despite that. She was also the Head of Digital Production for The Box Show, the intersectional feminist comedy show and is deeply embedded in the intersectional feminist comedy scene in New York.
Amber performs all over the city, bringing humor to dark topics like growing up an orphan, the infantalization of female sexuality and reclaiming rape jokes. Her humor has a feminist tilt, because she has a vagina and that is the source of a lot of material. Period. Oh you don’t like puns, well her dad is dead, someone has to make them.
http://amberrollo.com/
ABOUT GABE PACHECO 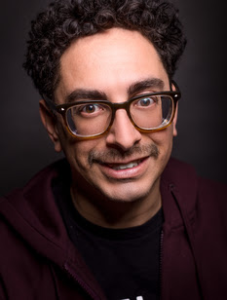 Gabe Pacheco, originally from Washington, DC, is an actor, comedian, host, friend, and roving academic. He’s an entertainer who inspires you to think, moments after you’ve already laughed. A bilingual performer with progressive leanings, watching 10 minutes of Gabe on stage can feel like you’ve smoked a joint of Ghost Train Haze sativa and mockingly laughed at headlines from the Sunday Times.

Animated, literate, and with a touch of sly post-Millennium wit, Gabe shimmies and flickers his way through a set. No one gyrates their hips better to the notion of the world crumbling around us, and no one better evokes the spirit of norteño music with the message of early-80’s DC hardcore. It’s comedy that is steeped in the present, while hoping for a less ridiculous future.

With a decade of experience on the NYC scene under his belt, Gabe has appeared on stages as big as Caroline’s, as experimental as The Creek & The Cave, and as buzzed about as the Knitting Factory. He’s been accepted into the Asheville Comedy Festival and the Accidental Comedy Festival. He’s shared insights on Sirius XM’s “Tell Me Everything with John Fugelsang” and “Affirmative Reaction with Xorje Olivares”, while also sitting in as the permanent guest host of the widely popular, left-wing humor and journalism podcast, “The Katie Halper Show”. He hosts his own podcast film review Eat Pray Judge and is co-host of Ponzi Scream, the leftie podcast examining white collar crime. Gabe has trained at the UCB Theater in NYC and is a veteran in the Story Pirates Acting Company, preparing him for his starring role in the short film “Leaves in Autumn”, which was screened at the Anthology Film Archives (NYC) as part of the New Filmmakers Festival.

Gabe Pacheco is a performer. And a storyteller. And an informed bystander of the seemingly never-ending spectacle of current world affairs and humanity that demand our attention…moments after we’ve already laughed.

Don’t like ads? Become a supporter and enjoy The Good Men Project ad free
photo credit- the next binge thing