Get Daily Email
Join/Login CLOSE
Home / All Things Geek / “Winter is Here” and so is the Final Ever Installment of HBO’s Game of Thrones! 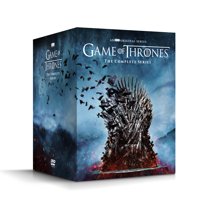 If you’ve been paying attention, you know that I’m a HUGE fan of Game of Thrones and I’ve written many articles featuring my take on the show and merchandise. 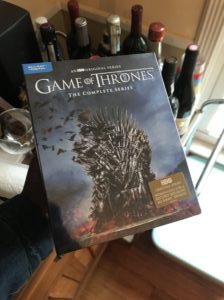 Simply put, Game of Thrones was a Pop cultural phenomenon unlike any show in recent memory. An unparalleled series that until this day stands alone as a sweeping fantasy epic and visual spectacle in television history that millions of fans worldwide had water cooler conversations about.

So it comes as no surprise that on December 3 rd, as HBO releases Season 8 and the complete collection of all eight epic seasons of one of the most talked about television series of all time, I’m here to rally the realm about what’s coming! 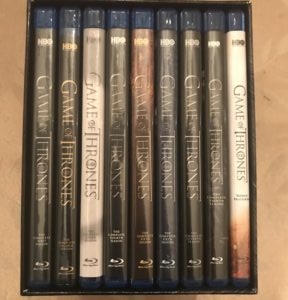 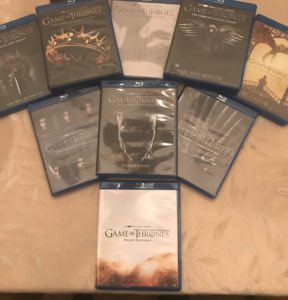 Game of Thrones final run will be released next week on Tuesday, December 3 rd on Blu-Ray and DVD, on 8 discs, including a ninth disc of special bonus features including the phenomenal two-part documentary “Game of Thrones – The Last Watch” by filmmaker Jeanine Finlay chronicling the making of the final season. 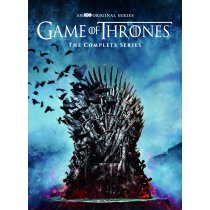 The shows stellar ensemble cast was the launching pad for many careers and brought in some record-breaking viewing numbers during its run. Now that the show has wrapped, it’s available in this very fine collectible Blu-Ray format I had the chance to review!

Game of Thrones: The Last Watch: A documentary featured in two parts by Jeanie Finlay chronicling the fascinating story of season 8 production.

When Winter Falls: Exclusive 30 minute featurette with showrunners David Benioff and D.B. Weiss, along with major stars and behind-the-scenes players, breaking down all that went into the colossal filming of “Battle of Winterfell” in season 8 episode 3.

Duty is the Death of Love: A compelling look at how the team behind Game of Thrones and it’s major stars including Kit Harrington, Emma Clarke, and Peter Dinklage, brought the show to its conclusion in the series finale “The Iron Throne.”

Audio Commentaries: there are 10 audio commentaries on the final season with cast and showrunners that are insightful and brilliantly funny!

Deleted and Extended Scenes: there’s 5 never before seen in season 8 one, in particular, is striking that I won’t spoil for you here! 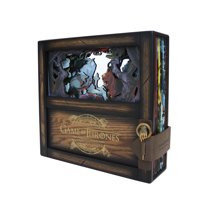 I loved the ninth disc because much of that material was unknown to me until now and it gives a bit more perspective as a fan of the show on some of the decisions the filmmakers and cast made regarding the final season. It’s not just a slap on from the cutting room floor.

Ahead of the holidays, this Blu-Ray & Digital combo will make the perfect gift for any fan of the show, and for those who have never watched the show before, I envy for the enthralling 75+ hours of quality television they have in store!

If you’re not familiar, Game of Thrones is based on the series of beloved best selling novels by George R.R. Martin. The show remains the most awarded series in television history. Earning 161 Emmy Nominations and 59 wins! It’s the most watched HBO program ever, the final season averaged 44 million viewers a week.

HBO is releasing a collectible packaged edition including the copy I’m reviewing Game of Thrones: The Complete Edition packaged in a visually stunning wooden shadow box case designed by Robert Ball (The artist behind the “Beautiful Death” series) that summarizes the Game of Thrones story and features a “Hand of the King” pin clasp This will retail at $249.00 on Amazon Prime (I’ve included pre-order links below) a steelbook Edition and the Blu-Ray Digital & DVD Edition I’m featuring here without the collectible packaging retails at $199.99.

All editions are loaded with Extra content and will be available to own on December 3rd. Look for more Holiday gift ideas here at All Things Geek in the coming weeks!