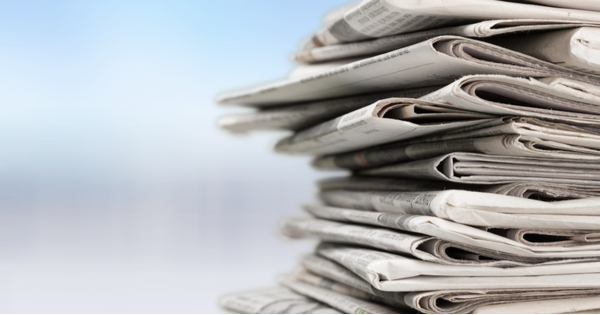 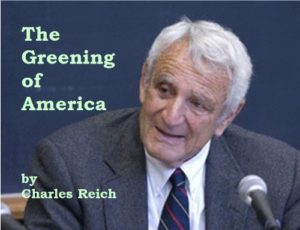 Charles Reich died recently. The author of “The Greening of America” got a big obituary in the New York Times, but I can assure you: he may be the most forgotten author of one of the biggest best-sellers of the 1970s. A friend suggested that Reich’s book was a prescient analysis of the corporate state and an idealistic vision of a way out. I hadn’t read it. I looked for it on Amazon, and was stunned to learn it was out of print, with only used copies for sale. I bought it, read it, saw the charm and innocence of his vision, and decided to publish it as a Head Butler book. Not at a wearying 125,000 words — I cut it to a more reader-friendly 25,000. Reich wrote a new introduction and a final chapter, and in 2012, it made a second debut. [To buy the Kindle edition for $3.99, click here.]

For the next two decades, “The Greening of America” was out of print.

This seemed crazy to me. I vividly remember reading this book, sometimes marking half the lines on a page. And I remember reaching the end and being stunned by its hopeful conclusion:

We have all known the loneliness, the emptiness, the plastic isolation of contemporary America. Our forebears came thousands of miles for the promise of a better life. Now there is a new promise. Shall we not seize it? Shall we not be pioneers once more, since luck and fortune have given us a vision of hope?

The extraordinary thing about this new consciousness is that it has emerged out of the wasteland of the Corporate State, like flowers pushing up through the concrete pavement. Whatever it touches it beautifies and renews, and every barrier falls before it.

We have been dulled and blinded to the injustice and ugliness of slums, but the new consciousness sees them as just that — injustice and ugliness — as if they had been there to see all along. We have all been persuaded that giant organizations are necessary, but it sees that they are absurd, as if the absurdity had always been obvious and apparent. We have all been induced to give up our dreams of adventure and romance in favor of the escalator of success, but it says that the escalator is a sham and the dream is real.

And these things, buried, hidden, and disowned in so many of us, are shouted out loud, believed in, affirmed by a growing multitude of young people who seem too healthy, intelligent and alive to be wholly insane, who appear, in their collective strength, capable of making it happen. For one almost convinced that it was necessary to accept ugliness and evil, that it was necessary to be a miser of dreams, it is an invitation to cry or laugh. For one who thought the world was irretrievably encased in metal and plastic and sterile stone, it seems a veritable greening of America.

That prediction of a glorious future — almost none of it came true. Instead, as Charles Reich recently noted, “For the last 40 years, I have watched the un-greening of America.” So have I. So have other veterans of the ’60s and ’70s. But the outcome isn’t the point — the message of radiant optimism is. Clearly, I’d like to feel that optimistic again.

So I became Charles Reich’s partner; together, we created an abridged, updated e-book edition of his mega-bestseller for Head Butler Books.

It’s not quite the book it was in 1970. I edited the text, compressing the original 125,000 words to an Internet-friendly 24,000 words and eliminating most of the sections on “Consciousness III.” Then Charles wrote a new preface and final chapter.

The e-book of “The Greening of America” is available in a Kindle edition at the 1970s price of $3.99. [To sample or buy the Kindle edition from Amazon, click here.]

Who was Charles Reich? He graduated in 1952 from Yale Law School, where he was editor-in-chief of the Yale Law Journal. In 1953, he was a clerk for U.S. Supreme Court Justice Hugo L. Black. He became an associate professor of law at Yale in 1960, and, from 1964 to 1974, was a professor of law. Among his students: Hillary and Bill Clinton, Robert Reich. In a word, he was very, very smart.

The first reason to read “The Greening of America” — the title predates the environmental movement now known as Green — is because it presents a brilliant and original take on the United States. In these pages, Reich described  American history not as a progression of events but as a series of shifts in consciousness. He showed how the values of village life that guided the birth of this country (“Consciousness I”) gave way to a Corporate State that brings no joy to everyone who serves it (“Consciousness II”).

The second reason to read “The Greening of America” is for its challenging proposal for a way out: the radical, idealistic “Consciousness III.” For Reich, political change comes last. The way he sees social and political change, you start with the individual, with yourself. First change the way you think, help others do the same, then the culture changes — and, finally, the system changes.

Our politics today sounds a lot like a debate between a “Consciousness II” Administration (which argues that the federal government can best protect us from an unregulated marketplace and a shredded safety net) and “Consciousness I” (candidates who tell us that the solution to all our problems is a return to a time when men took care of their own business and government barely existed).

“The Greening of America” asks questions and proposes solutions that aren’t much discussed in our public forums. Much of it reads like a hippie’s pipe dream. You’ll be tempted to hear Joni Mitchell singing “Woodstock” and dismiss it outright. I understand. But it won’t kill you to take a sip from the cup of innocent, if desperate, idealism.

—
This article originally appeared on The Head Butler.

Jesse, Thanks for bringing back such an important book. Another important book that was published in 1970, that is even more relevant today, is Future Shock, by Alvin Toffler.