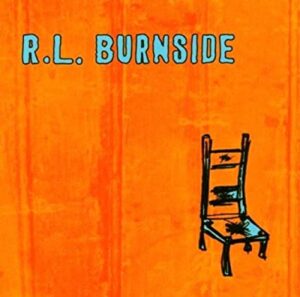 They say the best thing to do when you see trouble coming, call 911. I believe it’s quicker to call 357.

Back in Mississippi, he told interviewers, he spent six months in jail for murder. Why only six? His employer needed him and pulled strings to spring him.

I didn’t mean to kill nobody. I just meant to shoot the sonofab*tch in the head. Him dying was between him and the Lord.

As you may imagine, R. L. Burnside drank hard — his beverage of choice was a concoction he called the Bloody Muthaf*cka, made of Old Grandad Whiskey and tomato juice — and played harder. You want subtle, look elsewhere. Burnside struts and shakes, moans and cries, cares nothing about convention (most of the lyrics on a terrific song are “Burnside…. Burnside”) and, although he married just one woman and had a dozen children, casts himself as present at the creation of sin. And he makes sin look damned good. [To buy “Wish I Was in Heaven Sitting Down” from Amazon and get a free MP3 download, click here. For the MP3 download, click here.]

Women and whiskey, hard luck and trouble — these are the raw ingredients of Burnside’s music. Work hard, get nowhere; screw up, lose it all. It’s an unforgiving world:

Walked through water, walked through mud
Came to a place called the bucket of blood
Asked the bartender for a little something to eat
Gave me a dirty glass of water and a tough a$$ piece of meat

But the words don’t matter. This music starts at urgent and then redlines. Listen to “It’s Bad, You Know” — yes, you heard it on “The Sopranos” — and then just try playing anything else. You can’t.

R.L. Burnside’s appeal is just too primal for all competition. There’s the signature Burnside shuffle beat, raunchy harmonica and cocktail organ. There are the shockingly blunt lyrics: “She asked me why/ I just went on and told her.” And there is Burnside’s nasty guitar and knowing voice at the center.

R.L Burnside is definitely not for children or prudes — he’s bad, you know. But if you’re in that Friday night, just-got-paid party mood, he makes misery astonishingly satisfying.