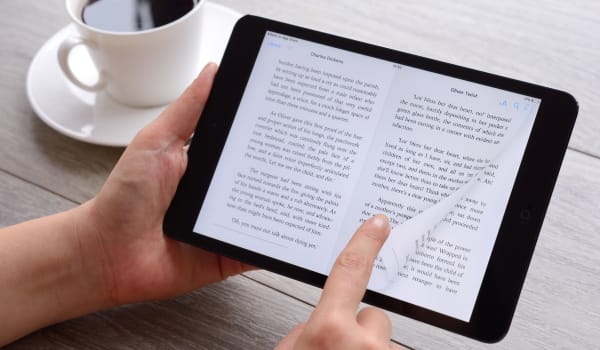 I work with words. When I write – articles, essays, reviews ­– I switch between paper and screen; typing, scribbling, printing, then graffitiing the printout. When I read, I read onscreen and off, according to mood and habit. I don’t buy physical newspapers (it’s too much like paying for a printout of yesterday’s website). But I do subscribe to The Economist, for instance, which gives me a print edition in the post and access to extra content online. This makes perfect sense. When I want it, there’s the handsomely curated geography of a paper magazine. The rest of the time, the digital edition gives me live updates, reader comments and options for archival research.

If all this sounds uncontroversial to the point of banality, here’s a funny thing: when it comes to books, it’s controversy all the way. Print or ebook; paper or Kindle? It’s a Manichaean realm of much-hyped combat. At stake: nothing less than the soul of reading and culture. I must choose one, and both like it and lump it. Forget what I and most readers of 2015 might want, or even feel we’re entitled to: a print edition for handling and gifting and scribbling; plus a searchable, transportable, browsable, malleable digital version for using. No. We must choose. And our only choice, should we wish for both, is to pay twice.

Frankly, this is odd to the point of insulting. As the Irish author Julian Gough recently fulminated via Twitter (this is how authors in 2015 do most of their fulminating): ‘If publishers are going to charge £15 or $20 for a new print book, they HAVE to include the (marginal cost zero) ebook too. But they don’t.’ And: ‘So I have to pay a fortune for an incredibly heavy object that I can’t search, & can’t get access to unless I carry it everywhere in my bag.’

It’s all down to economics. Nothing to do with the essential nature of media, or digital disruption, or – least of all – what readers and authors might want or like. When it comes to music, a service such as AutoRip is perfectly capable of giving me a free digital version of every physical purchase I make. But with books, it’s a bitter and brutal battle between publishers on the one hand and Amazon on the other, redefining what it means to be profitably in the book business in the 21st century.

You don’t get very far in most lines of business without profits, of course, and I hope that good publishers continue to make them for years to come (not the easiest feat given Amazon’s unorthodox views around money-making). But what I can’t bear is the trivialising of a rich debate – over how we disseminate written knowledge and culture; over what it means to make the most of both physical and digital media – into a false choice, complete with naysaying choruses. I’m utterly bored by nostalgia over the aroma of mouldering library books. Equally tiresome are technotopian neophytes deploring anything that can’t be plugged in. And I’m buggered if I’m going to buy something twice just because I want both to hold and to search it.

Nor, I should add, do I have much enthusiasm for the future of print as epitomised by the latest craze-of-our age: adult colouring books, whose special blend of nostalgia and infantilisation promotes print as a kind of enema for befuddled brains. I have nothing against colouring-in as such, or against actual infants enjoying a technicolour engagement with paper. Indeed, there’s mounting evidence that reading and writing on paper are tough to beat as an educational tool. I’d just like the future of books to entail more than hokey mindfulness and an executive pencil case.

At this point, a confession. My own most recent book exists only in print format. It’s called Live This Book! (2015), it’s published by Penguin and, among other things, it’s an experiment with everything print and paper uniquely offer: heft, texture, the crafting of a physical object ­– but also the interactive potentials of scribbling, sketching, and asking that open questions be given a reader’s undivided attention. This isn’t because I’m a howling technophobe. I just happen to think that words, pens, paper, keyboards and screens are a realm whose boundaries are worth pushing towards and testing rather than whining about from a distance.

Amazon’s founder Jeff Bezos put it more clearly than most last year when he noted that books are no longer competing only against other books: ‘You’re competing against Candy Crush and everything else.’ The real battle isn’t between screen and paper editions, or even between Amazon and Hachette: it’s between one person trying to conjure a world in words, and another inviting me to match coloured shapes in lines until my eyes glaze into darkness. Readers, writers, publishers: get a grip. We need to stick together. The enemy isn’t pixels (or print) – it’s someone breathing a bored sigh, plucking their iPhone from their pocket, and giving up on us entirely.