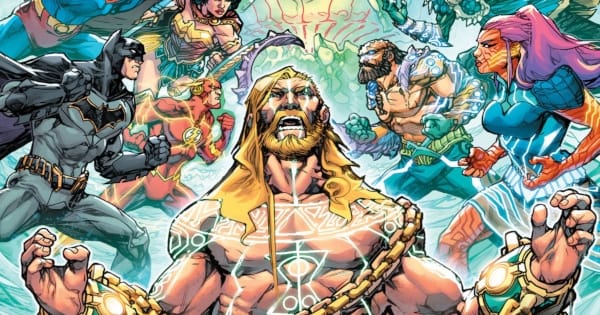 I have been lucky to read a number of DC graphic novels lately. Each one has been great, and some have truly blown me away. They all pit well known heroes against some really strong foes. Yet somehow they always find a way to stop them. This may not be so easy though in ‘Drowned Earth’ when beings from another world come to conquer ours. I was able to read a digital copy of this graphic novel and here is what I thought of it.

You can read the plot for Justice League/ Aquaman ‘Drowned Earth’ here:

The Dark Knight. The Man of Steel. The Amazon Princess. The King of Atlantis. Aided by their friends in the Justice League in the world above the surface–and by the power of Queen Mera in the world below–Batman, Superman, Wonder Woman and Aquaman protect and defend the peoples of Earth like the heroes and gods of legend.

But some gods are more than legend. Some hatreds are more powerful than any hero. And some evils are older and deeper than the sea.

From darkness untold, the Ocean Lords have arisen. These ancient gods have an undying grudge against Arthur, Mera, Diana and the rest of the Justice League–a thirst for vengeance not even the vastest waters can slake. With Aquaman’s nemesis Black Manta as the tip of their spear and an entire armada at their command, they are set to unleash a cosmic flood that will sweep the entire world away.

Can Aquaman and his incredible allies stop the deluge of destruction? Or will everything they hold dear go under?

I had so much fun reading Justice League/ Aquaman ‘Drowned Earth’. The threat that they face was different from anything else, and beating them was going to push this team to their limits. Meanwhile Aquaman faced his own challenges and discovers some new things about himself along the way. There was action, drama, and some epic fight scenes. If you are a fan of these characters then this is a graphic novel you will want to read.

Justice League/ Aquaman ‘Drowned Earth’ is available now. You can order this graphic novel on Amazon and at Barnes and Noble.