Kristen Caven is the author of The Souls of Her Feet, in which the story’s fairy godmother is male. There are several reasons he was created so, and Kristen counts them out for us.

In my new book, The Souls of Her Feet, the downtrodden protagonist’s life changes, as in every Cinderella story, when a Fairy Godmother appears in her life. But in this version, the “godmother” is also her real-life, legitimate godfather — the former best friend of her deceased parents.

I chose to make this traditionally female character a man for many reasons, the first and funniest being the gimmick of his shoe size. Uncle Harry wears a men’s 11 ½, which corresponds to a woman’s size thirteen. Why does this matter? Because, unlike most Cinderellas with “feet so tiny no one can fill her shoes,” Ashley St. Helens can only wear flip-flops. “My big growth spurt between fifteen and sixteen,” she explains to Harry, “took place entirely below the ankles.”

The Souls of Her Feet is based on a musical of the same name. In that version, Harry comes home from work, takes off his power suit and puts on a ruffled robe. A complicated man, Harry is gay, and not transgender, but a cross-dresser. In the book, he appears as a 6 foot tall woman in heels, ready to give Ashley a makeover. So that’s reason number two. Harry is a drag queen who can loan Ashley a pair of “glass slippers.”

Harry could have been a straight male cross-dresser (there are plenty of those, starting with Bugs Bunny) but I wrote Harry as gay because I was inspired by a closeted family member of mine who saved my own life as a teenager. The essence of a Fairy Godmother is a family outsider who knows who you are… someone to whom your soul is more valuable than the role you play. And because Harry is both gay and “apparently straight” in his real-world career, he sees life from a broader, more interesting perspective. In his art, he chooses to cross into feminine realms—“I know the art of becoming a woman…” he sings; “I do it myself every week.” Therefore the core Cinderella moment is not magical at all; her princess persona is a work of art Harry creates. And in doing so, he becomes her teacher, initiating her into the time-honored tradition of getting male attention. Reason number three: a male Fairy Godmother gives transformation a whole new dimension.

Harry Carrington, Esq. is a high-powered human rights lawyer. There are lots of high-powered woman lawyers out there, but (reason four🙂 “the man in the suit” is another cliché I played with to tell my story. He may look like a really tall, overly-made-up lady when he’s in drag, but for the audience to associate Harry with his power suit is for them to ground their understanding of him as a person not to be f—-d with. Ashley lives in a world of women who use their power in the indirect, undermining ways that represent the worst of womanhood; she needs a very clear anchor point to help her own her instincts to be fair and respectful, upfront and democratic.

Harry helps her do this in the scene where we meet him. Over the phone, he encourages Ashley to vent her feelings of frustration and anger. This doesn’t come naturally to someone who was raised to be a nice girl, but by allowing and also encouraging Ashley to “bitch,” Harry helps her own her feelings and therefore discover her own power. Cinderella is, in essence, a very passive character. But Ashley finds, underneath her resentment, the keys to assertiveness. As Harry gives her permission and support in standing up for herself, Ashley discovers a very strong sense of justice.

It is crucial, in my version of this myth, that there is a man helping a woman find her fight. Feminists may pick at this part, and rightfully so, but there is a very real and funny permission dynamic in the psyche of a woman who lives with and depends on men. To illustrate, here’s the story of my mother-in-law declaring proudly to her family, “I’m getting a subscription to Ms. Magazine.” A second later, her tone and expression change and she asks, “Is that okay?” (Her sons and husband crack up… and tease her about it for the next forty or so years.) When we live in families, our world is held together with the agreements we make—and there is a fine line between seeking agreement and asking for approval. Apparently Ashley’s beloved mom had trouble with this; Ashley is shocked to hear Harry say he thought she was a bit of a doormat. So reason five is this: women’s language is full of subtle hints and permissions, whereas men prefer direct requests and straightforward refusals. It means a lot to Harry that he can give his best friend’s daughter the gift he could never give to his friend.

And here we come to the delicious backstory. Harry and Ashley’s parents were in a love triangle. Harry went to senior prom with Ashley’s mom, and came home wearing her dress. (This is why he has it to give to Ashley on the eve of her own prom.) She ended up having feelings for him, but surprisingly, Harry discovered that night that he had feelings for his other best friend, who asked Ashley’s mom out the next day, (she couldn’t refuse), and eventually became Ashley’s father (and with whom, coincidentally, he also shared a shoe size). Which is why Harry left the country at Ashley’s age, to shake off the heartbreak and find himself. After a few years, he met a special someone who helped him grow into his own power, giving him the pair of epic shoes that ended up on Ashley’s feet. So reason number six: the story could not have unfolded properly if Harry weren’t a dude!

So, Ashley’s Fairy Godmother/Godfather/Godwhatever (which makes for a great song in the forthcoming musical) is a man because he has big feet, a power suit, and an interesting perspective on dressing up. The scene where he, dressed as a woman, confronts Ashley’s stepmom, also provides a delightful new twist on the ladies’ catfight trope—precisely because of the way he takes her in his arms—and then wipes the dance floor with her.

As a woman who loooooooves ballroom dancing myself, (you may complain about your football injury but I’ve got one from waltzing), I wanted to mine the literary delights in that realm. I will snuggle up to other ladies on the dance floor with great pleasure, but there is nothing, nothing like being held in the arms of someone taller and stronger than yourself—especially while balanced on pointy heels. A guy who creates a secure frame with his arms for a gal to hang in, rest on, and twirl out from, and—this is the key—guides her energy without dominating it—is truly God’s gift to women. And I wish more men could experience this freeing cocktail of vulnerability and trust.

Which brings me to the most important reason of all for making Harry a man: his enveloping embrace. When Harry and Ashley finally meet, for the first time since she was a child, he lifts her up off the ground and completely envelops her. Harry becomes her new protective father figure. His protection from the nasty stepmother provides Ashley with a sanctuary that allows her to leave her childhood home without having to get married right away. Also, Harry is there to intimidate Jeff Prince in the ritualistic way fathers and boyfriends have—and perhaps even give her away at a wedding some day. Given time and space, Ashley will find her loving mother within herself, but she will also be able to find her “Happily Ever After” because Harry is there to surround her. That’s reason number seven.

Cinderella is a quintessential feminine story about losing everything, then finding more than you ever imagined. The changing world has given us new ideas of what it means to be a princess, and as refreshing as all of Hollywood’s butt-kicking females are, it seems almost de rigeur for girl characters to fight like boys. This makes Cinderella hard to reinvent since she is essentially a passive character and hard to make interesting or sellable. But to force a heroine through a hero’s journey (Tim Burton making Alice kill a Jabberwock herself was nauseating) ignores and disrespects the curious, yielding feminine principle. There is nothing boring about being a girl, a powerful girl, who finds love and makes good things happen. There is nothing shameful about seeing opportunities and accepting help from friends. Reason number eight, or perhaps all the reasons together, is that a strong masculine character provides the backdrop, contrast, and the dynamic spark Ashley needs to ignite her personal power and blossom as a woman.

Kristen Caven writes in various voices to educate, share insight, inspire, and amuse. She’s got brothers, a dad, a husband, a son, and loves working with and dancing with good men. Find links to her travel and ADHD blogs, cartoons, graphic novels, political essays and other creative works at www.kristencaven.com.

Here’s a link to the project page! http://www.thesoulsofherfeet.com if anyone would like to read the book.

How very fascinating. I hope this musical will be coming to my town as I’d love to see it. This is a struggle I’m currently navigating myself. As a not particularly feminine woman, and one who hates the idea of being anything other then myself I have really struggled with what it means to be a woman. I’ve always admired the strength and freedom of men to be direct, as in my career my gender is mainly a detriment. This hits really close to home for me.

Thank you for your comment! I think there should be more fairytales for not-particularly-feminine-women. So many of them are prescriptives for femininity, but everyone likes getting caught up in magic moments that change the course of life. 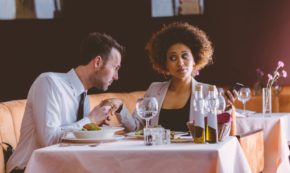 Facebook63TweetPinEmailShares63
wpDiscuz
3
0
Would love your thoughts, please comment.x
()
x
| Reply
Share this ArticleLike this article? Email it to a friend!
Email sent!