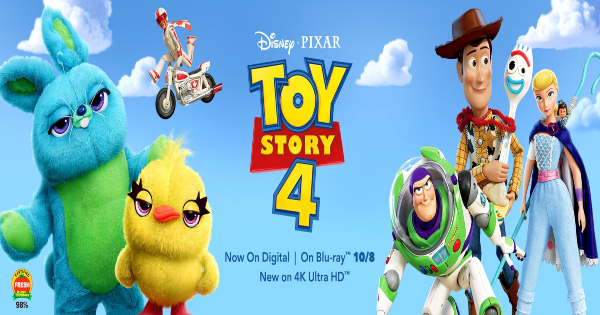 The Newest Adventure ‘Toy Story 4’ is coming to Blu-Ray

I really have enjoyed all the Toy Story movies. They have lovable characters, good soundtracks, a talented cast, stellar animation and tell some great stories. I was able to see Toy Story 4 in theaters and overall really liked it. Now it is coming out on Blu-Ray. I was able to get a review copy and here is what I thought of it.

You can read the plot for Toy Story 4 here:

Woody has always been confident about his place in the world, and that his priority is taking care of his kid, whether that’s Andy or Bonnie. So when Bonnie’s beloved new craft-project-turned-toy, Forky, declares himself as “trash” and not a toy, Woody takes it upon himself to show Forky why he should embrace being a toy. But when Bonnie takes the whole gang on her family’s road trip excursion, Woody ends up on an unexpected detour that includes a reunion with his long-lost friend Bo Peep. After years of being on her own, Bo’s adventurous spirit and life on the road belie her delicate porcelain exterior. As Woody and Bo realize they’re worlds apart when it comes to life as a toy, they soon come to find that’s the least of their worries.

It was wonderful getting to watch this movie again. Although the fourth in the series, it still told a touching story. ‘Toy Stories’ had the cast and crew talking about memories of their favorite toy growing up. ‘Toy Box’ took a look at some of the new characters in this film and what it was like for the actors to bring them to life. There were also some pretty good deleted scenes. If you are a fan of the previous Toy Story films then you will want to add this one to your collection. To learn more about Toy Story 4 click on this website.