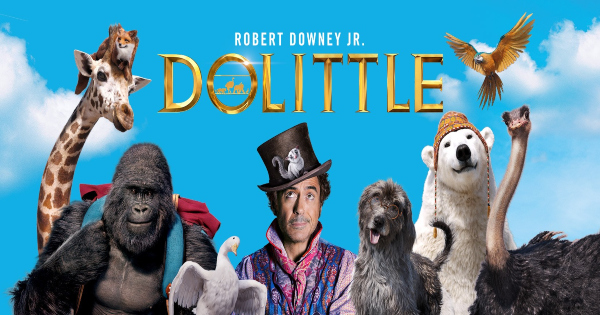 I thought Eddie Murphy was pretty good in Dr. Dolittle. This movie had a great cast, and put some fresh new spins on this series. Dr. Dolittle 2 was also rather good and did a wonderful job telling the next chapter in this series. When I heard a new Dolittle was being made, I had mixed feelings about it. I was able to get a review copy of this film and here is my thoughts on it.

You can read the plot for Dolittle here:

After losing his wife, he hermits himself away behind the high wall of his manor but is forced to set sail on an epic adventure when the queen falls gravely ill. Helping Dolittle in search of a rare cure are his rambunctious animal friends—including Chee-Chee, an anxious, self-conscious gorilla; Dab-Dab, an enthusiastic but bird-brained duck; the bickering duo of cynical, neurotic ostrich Plimpton and chilly-but-chill polar bear Yoshi; as well as a headstrong parrot named Polynesia.

I thought this movie was okay, but it wasn’t great either. Many of the jokes fell flat, and relied on humor not fit for most audience members. The story had a few good moments, but these were few and far between. The final act is where it got bad, with scenes that made no sense and jokes that just weren’t funny. Some people might like this film, but I wouldn’t recommend it.

Facebook5TweetPin2EmailShares7
wpDiscuz
0
0
Would love your thoughts, please comment.x
()
x
| Reply
Share this ArticleLike this article? Email it to a friend!
Email sent!