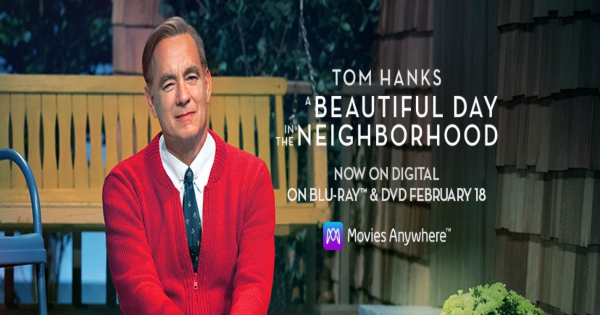 I really like Tom Hanks as an actor. He has voiced Woody in four Toy Story films, and in each one has added new elements to this character. He was also really good in Castaway and Sully. When I heard about A Beautiful Day in the Neighborhood I thought it might be good. Well now it is coming out on Blu-Ray. I was able to get a review copy and here is my thoughts on it.

You can read the plot for A Beautiful Day in the Neighborhood here:

A timely story of kindness triumphing over cynicism, based on the true story of a real-life friendship between Fred Rogers and journalist Tom Junod. After a jaded magazine writer is assigned a profile of Fred Rogers, he overcomes his skepticism, learning about kindness, love and forgiveness from America’s most beloved neighbor.

This was not a bad movie, but I can’t say I loved it either. Maybe it was the direction the film went in, or it could be it just wasn’t that amazing. It was nice to get a behind the scenes look into this amazing world, and to learn a bit about this wonderful man. ‘Tom Hanks as Fred Rogers’ talked about how this actor heard about the role, why he chose to take it, and tells a few interesting tidbits about Fred Rogers. ‘The People Who Make a Neighborhood: The Making Of’ looked into the challenges of making this movie and had lots of great interviews from the cast and crew of the original TV show. Some people might enjoy this film, but it certainly won’t be for everyone.