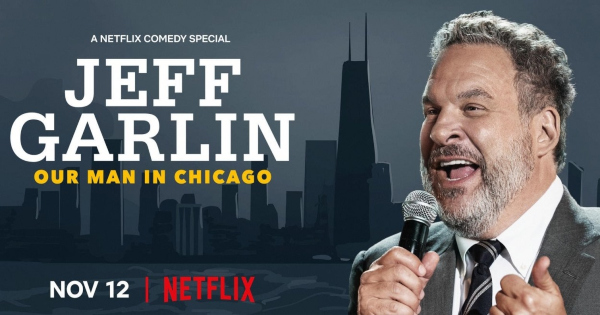 Jeff Garlin comes to Netflix in ‘Our Man in Chicago’

I am a big fan of The Goldbergs. The 80s nostalgia is always clever, funny and makes for some great episodes so far. Jeff Garlin has been an important part of that show for years, so when I heard he was doing a comedy special for Netflix I hoped I would get to watch it. I was able to get a screener for Our Man in Chicago and here is what I thought of it.

You can read the plot for Our Man in Chicago here:

Multi-hyphenate comedy veteran, Jeff Garlin – best known as Curb Your Enthusiasm’s Jeff Greene – brings a new comedy special to Netflix. Filmed in his hometown, Chicago and on the 37th anniversary – to the day – of his comedy debut, the one-hour special is ripe with Garlin’s signature blend of storytelling and improv. The comedian takes viewers on a stroll down memory lane, with some detours into the personal lives of the audience, a few hours in jail and enough donuts to last a lifetime.

I really enjoyed watching Our Man in Chicago. It turned out to be funnier than I expected, and had me laughing quite often. The jokes he told were unexpected, but in a way that is what made them funny. You learn some things about this comedian that I thought were pretty interesting. If you are a fan of Jeff Garlin then this is a special you will want to watch.