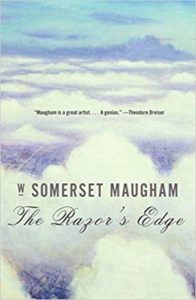 I love Flaubert, de Maupassant and Salter, but Maugham is my master. For the simplest reason: he’s the greatest storyteller. And there’s a case to be made that “The Razor’s Edge” is his best novel. The issue is important: how you live in a world obsessed with money when you know we have a higher destiny. Maugham has smart things to say about that, but what is really remarkable is that you will read his musings without feeling he’s lecturing you. Just the opposite: you care. And then there is the relevance factor: We are currently watching the rich and their bought-and-paid-for politicians scrambling for every last dollar. We may feel we have failed because we’re not snuffling for truffles. This book will make you think twice. But mostly, it will give you happy hours of reading.

“The Razor’s Edge” seems to be a love story. Isabel Bradley, beautiful and rich, has waited for her war hero fiancé Larry Darrell to return home to Chicago after World War I. He’s slow to do so, and when he does, he seems in no rush to marry and start making a fortune in the brokerage business. What’s Larry’s problem? A friend died saving his life in the war; now Larry wants to “loaf” and find out what really matters. Looking on is Elliott Templeton, an expatriate of a kind now obsolete: a snobbish climber who, near the end of his life, will say, “I have always moved in the best society in Europe, and I have no doubt that I shall move in the best society in heaven.” And, not least, Somerset Maugham, as narrator and minor character.

If the locations aren’t limited to Chicago and Paris and the salons that define the boundaries of the social set, it’s because Larry becomes a “seeker.” He takes grubby work so he’ll have more time to read and think, and then he goes to India and more or less abandons himself to ultimate questions. At length, he returns to Paris, runs into Maugham and explains himself. [To buy the paperback of “The Razor’s Edge” from Amazon, click here. For the Kindle edition, click here.]

About this chapter, Maugham writes: “I feel it right to warn the reader that he can very well skip this chapter without losing the thread of the story as I have to tell, since for the most part it is nothing more than the account of a conversation that I had with Larry. However, I should add that except for this conversation, I would perhaps not have thought it worthwhile to write this book.”

What did Larry learn? I’m giving nothing away by quoting him — you know what he learned. It’s this:

What he [the guru] taught was very simple. He taught that we are all greater than we know and that wisdom is the means to freedom. He taught that it is not essential to salvation to retire from the world, but only to renounce the self. He taught that work done with no selfish interest purifies the mind and that duties are the opportunities offered to man to sink his separate self and become one with the universal self. But it wasn’t his teaching that was so remarkable; it was the man himself, his benignity, his greatness of soul, his saintliness. His presence was a benediction. I was very happy with him. I felt that at last I had found what I wanted.

“The Razor’s Edge” was published in 1944, when the world wasn’t focused on spiritual transcendence. So you might think readers didn’t line up for this novel. Wrong. It was Maugham’s biggest hit. Twentieth Century Fox paid $250,000 — that would be $3.5 million in 2018 dollars — for the film rights. A smart purchase: The film made a fortune and was nominated for four Academy Awards.

Delicious, yes? As is the novel’s dialogue. As are the author’s descriptions; a minor character, for example, “combined irreproachable connections with notorious immorality.” And this, my favorite: “American women expect to find in their husbands a perfection that English women only hope to find in their butlers.”

In sum, 320 pages of exquisite storytelling.