Get Daily Email
Join/Login CLOSE
Home / A&E / An Interview with the Cast and Crew of ‘Dark Crystal: Age of Resistance’ 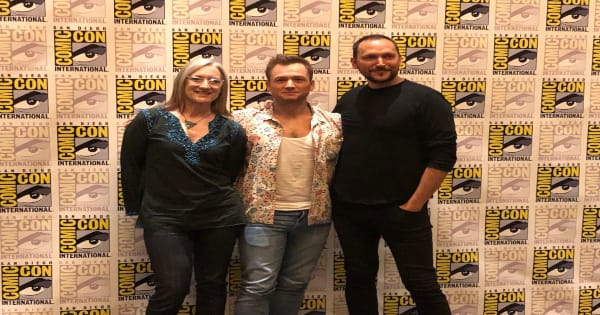 A chat with the cast and crew of ‘Dark Crystal: Age of Resitance’

I recently watched Dark Crystal again. It isn’t a bad movie, but it definitely has some weird moments. So when I heard about Dark Crystal: Age of Resistance I wasn’t sure it was a good idea. Once I heard about the cast and saw a trailer though my doubts went away. At Comic Con I got to interview some of the cast and crew from this show and here is what they told me about it.

What was your knowledge of ‘The Dark Crystal’ before you came onto this show? And how did you prepare for your character?

Taron Egerton: I originally watched the film when I was around 6 or 7. My dad showed it to me. I just thought it was completely enchanting, and frankly quite scary. But in that very kind of exciting way. I am a horror fan. I mean Dark Crystal is nowhere near a horror movie. But there is something about that thrill, that spiciness that I quite like. And so, around 18 months ago, when I got a call about this I basically bit Louie’s hand off. I really thought it was so exciting to be involved in something that I was so enamored with as a kid, especially given her faithful means of telling the stories and the techniques used to tell the story. It is very, very faithful to the original movie. So yeah, I am just thrilled to be here.

Taron, was there anyone you were shocked to learn you got to work with?

Louie and Lisa, was there anyone in the cast you were surprised to get?

Louie Leterrier: Well, everyone. For a director, it really is a dream come true. Everyone that signed on, we were like really? We were literally asking people thinking ‘It’s too crazy. Let’s ask this person even though it is crazy’ then be like ‘Whoa, they said yes!?!’ At the last moment we had something to do. An interesting part and we would say ‘Let’s just ask Sigourney Weaver. And then she said yes!?!’ Like everyone wanted to be a part of it.

Louie: Well thank you. But it is also not the most glamorous of acting jobs. You just meet me in a sub-basement in London and I’m like ‘Say those words.’ Then I am like ‘Oh no! You were too slow or too fast.’ But in a sense it is pure acting. All these people sign on to work because it is really thanks to Jim Henson and the power of the original movie. I mean Taron, your agent didn’t get a chance to finish asking you if you were interested because you had said yes already.

Taron: I said yes before I got asked. I know clairvoyance. Who’d have thought it?

Louie: And a lot of people it was the same idea. It was a lot of work for a lot of people. Sometimes people were almost passing out because there were like 15 minute action scenes. You’d have to huff and puff and hit everything. Normally, on a set on a movie you do one take and it is like thirty seconds. Here it was like just go for it. We shot the thing, so we might as well just go for it.

Lisa Henson: We could never forget the incredible artwork of the puppeteers. We had twelve main puppeteers on the show who did all the main characters. It is extremely physical. It is funny, when you are talking about physicality I was like ‘Oh, how the puppeteers suffered!’ In the supporting roles we had pretty much every working puppeteer in England on the show. For a puppeteer to be on The Dark Crystal is a crowning achievement. Their work is incredibly delicate. So it is hard to explain puppeteering, I feel like you just have to see it. See the nuance and the delicacy that they brought to this project. It is really incredible; it is just really hard to explain it. That is why I feel like just watch it and see it, you know.

Taron: From an acting perspective, it is really quite incredible watching them do their thing. The individual persona and character they bring to their craft. It’s eighty percent of the performance, you know. I come in a put the cherry on the cake but they do all the hard work.

END_OF_DOCUMENT_TOKEN_TO_BE_REPLACED

Facebook15TweetPin3EmailShares18
wpDiscuz
Share this ArticleLike this article? Email it to a friend!
Email sent!