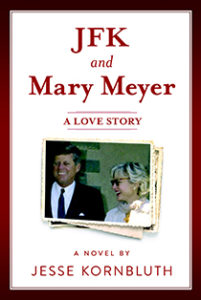 EARLY PRAISE: I blush. To read the extravagant praise from New York Times bestselling authors and a writer/producer of an acclaimed political TV series, click here.

If the diary is fiction that’s built on fact, yes. It helps if the man knows women who remind him of the woman in the dairy. And if he reads 100+ books about the time and the people he’s going to write about. And it doesn’t hurt if he’s spent decades interviewing women and most of his friends are women.

The result: “JFK and Mary Meyer: A Love Story.”

Got 2 minutes? Here’s a guided tour…

FACT: John F. Kennedy said he needed sex every three days or he got a headache. While he was president, he never had a headache — women streamed into the White House to share his bed, and when he traveled, there was almost always a woman waiting for him. Affairs that became real connections? He wasn’t interested. And yet, from January 1962 until his death, he had one constant lover: Mary Pinchot Meyer, a family friend and a frequent guest at White House dinners. Like his wife, she was expensively educated and socially prominent — but she was more adventurous, opinionated, and sensual.

FACT: On October 12, 1964, eleven months after Kennedy’s assassination and two days before her forty-fourth birthday, Mary took her noon walk along the towpath of the Chesapeake and Ohio canal in the Georgetown neighborhood of Washington. A gunman shot her, execution-style, in the head and the heart. An African American man was arrested, tried, and acquitted. Her murder remains unsolved.

FACT: That night, Mary’s best friend, then living in Japan, urgently called Mary’s sister Tony and Tony’s husband, Ben Bradlee. “Mary had a diary,” she said. “Please get it and secure it.” There are several versions of the events that followed; the most intriguing has the Bradlees rushing to Mary’s studio and finding James Angleton, head of counterintelligence at the CIA, holding a bolt-cutter. Eventually, Ben Bradlee has written, they found a small notebook, mostly filled with paint swatches, sketches, and shorthand ideas for her art—and no more than ten pages about an affair with an unnamed lover.

The Bradlees quickly understood the identity of that lover. As Bradlee would later write, “To say we were stunned doesn’t begin to describe our reactions.”

The Bradlees burned the notebook.

FICTION: This novel is the diary I imagine Mary Meyer might have written — not the notebook the Bradlees and Angleton found, but a full account of her life from 1961 to 1964. We know the dates she saw the president at the White House, and we know about every White House dinner she attended and the private parties where she and Kennedy were guests. And just enough has been written about a friendship that became a romance for me to imagine what Kennedy and Meyer felt, and when they felt it.

There are indelible scenes of social events: a star-studded lunch at the White House, with Frank Sinatra shouting out to JFK, “Hey, Chickie baby!” as the First Lady grimaces.

There is insider gossip: After the Cuban fiasco, Jackie was going through the President’s suit before sending it out to be cleaned, and she found a folded cocktail napkin in his pocket. On it, JFK had written: DO NOT FORGET—AIR COVER.

There is Mary’s meeting with Timothy Leary: “My idea,” she says, “is to get powerful men to take LSD and see that peace is possible.”

Mary’s savvy response to Kennedy at their first solo dinner: “Jack, I’m forty-one… way too old for you. And I’m a friend.”

Kennedy’s chilly take on his wife: “If Jackie hit twenty-five without a husband…she would have started going to Wall Street buildings at noon, taking the elevator to the top floor, and doing her absolute best to meet a guy before they got to the lobby.”

Mary’s take on the Kennedy marriage: “In public, Jack’s proud of Jackie; in private, I’ve seen him treat her as if he’s doing her a favor. It sounds awful, but I think their deepest connection is that they’re out for themselves, and if their marriage helps them get there, she’ll endure his infidelity and he’ll put up with her snobbery.”

After the assassination: “How many times I thought: This will never be. You fool, you risked your heart, knowing that it would end…that he would end it. And then he didn’t leave me. He left himself.”
Her guilt: “If I was any influence on Jack at all…on race and poverty and Vietnam…if I moved him away from safe ideas to dangerous ones…then I am partly responsible for his death.”

In “JFK and Mary Meyer: A Love Story,” the personal and the political stories merge. Two lovers, both shot to death. Two murders, eternally unsolved. Was his assassination a coup? If so, was her murder just a bit of housekeeping? Or were these murders isolated events: a demented loner in Dallas, a demented loner in Georgetown?

One thing is clear: Mary knew Jack Kennedy better than almost all of his friends — she understood that his promiscuity masked a deep loneliness. Given time, she believed her love could help him heal. And, given time, Kennedy might have done what he fantasized: divorce Jackie after the ’64 election and marry Mary. But then a love story became a tragedy.
—