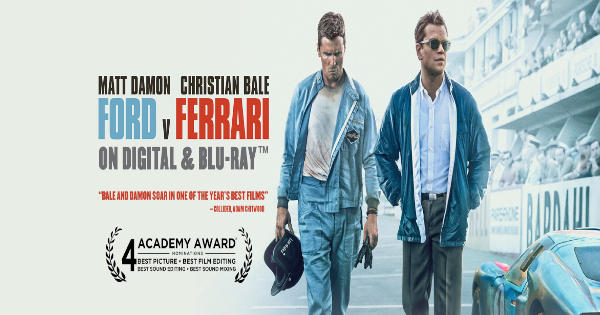 Learn about an interesting true story in ‘Ford V Ferrari’

Matt Damon and Christian Bale have each starred in lots of different movies over the years. Christian Bale did an amazing job in Batman Begins and The Dark Knight. Matt Damon gave a stellar performance in The Martian. So when I heard about Ford V Ferrari I thought it had the potential to be good. I was able to get a review copy and here is what I thought of this film.

You can read the plot for Ford V Ferrari here:

Matt Damon and Golden Globe® Nominee Christian Bale star in this “thunderously exciting” film based on the remarkable true story about Ford Motor Company’s attempt to create the world’s fastest car. American car designer Carroll Shelby (Damon) and the fearless British-born driver Ken Miles (Bale), together battled corporate interference and the laws of physics to build a revolutionary race car and take on Enzo Ferrari at the 24 Hours of Le Mans in France in 1966.

I thought this was an okay movie, but it wasn’t great either. It had a really long run time, and therefore dragged on at least a couple of times. Although the story it told was cool, it wasn’t all that mind blowing. The cast did a fine job bringing these people to life, and there were some great action scenes. Some people might enjoy this one, but it won’t be for everybody.

Ford V Ferrari is available now on 4K Ultra HD, Blu-Ray and DVD. You can follow this movie on Facebook.