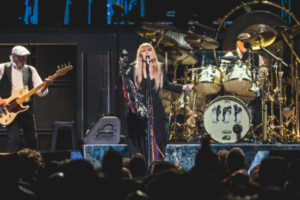 I have a confession to make: I have a bit of a crush on Stevie Nicks. My lovely wife tolerates this, as long as I’m a few thousand people back while in the same room with Ms. Nicks.

So it was with a bit of excitement that Fleetwood Mac descended on the new(er) Golden 1 Center in Sacramento, CA on November 23rd, 2018 to perform a sold-out show to celebrate their 50th anniversary as a band. Never immune to drama, the missing member of the band added a bit more for their golden anniversary.

To say in those five decades that there has been a bit of turbulence in the line up would be an understatement. Only two of the original members – namesakes Mick Fleetwood and John McVie – remain from the original band that released their self-titled bluesy first album in 1968. That original lineup with Peter Green on guitar and vocals, produced hits such as 1968’s “Black Magic Woman” (later covered by Santana) and “Oh, Well” (1969). Green left the band in 1970.

The version of Fleetwood Mac that the layman would know didn’t come into existence until 1974; when, after nine previous albums, the band added the talents of Lindsey Buckingham and Stevie Nicks after Mick Fleetwood heard a demo of a track off their “Buckingham Nicks” (1973) album. The pair officially joined Fleetwood Mac on New Years eve, 1974.

Declaring this incarnation of the band “successful” would be an understatement. Recording mega-hits such as “Gypsy,” “Dreams,” “Say You Love Me,” as well as ,” “You Make Loving Fun,” “Go Your Own Way”  and “The Chain” propelled them to one of the best selling bands of all time. Their second album with Nicks and Buckingham, 1977’s “Rumours,” is the eighth best selling album of all time with over 40 million copies sold worldwide.

Since then the band have broken up and gotten back together several times. Buckingham left in 1987 and Nicks followed in 1992. The band reunited at the request of then President-Elect Bill Clinton to perform at his Inaugural Ball (“Don’t Stop” was his big campaign theme song). By 1997 the “Rumours” line-up was back together touring and releasing their multi-platinum selling live album, “The Dance.” Christine McVie “retired” in 1999 and returned to much fanfare in 2014.

This bit of history is intended to point out that it is no surprise for this band to have line-up changes, so it was of little shock for me to hear of the departure of Lindsey Buckingham at the beginning of the year. Unexpected? Sure. Surprising? Not really.

Buckingham’s guitar and vocal styles are instantly recognizable. It would be a challenge for the band to replace him. The answer? Draft singer/guitarist Neil Finn of the band Crowded House (1986’s “Don’t Dream It’s Over”) and lead guitarist Mike Campbell of Tom Petty and the Heartbreakers to fill the void.

So the real question is: was Fleetwood Mac successful in replacing the sound and edge of Buckingham?

If you ask the crowd, it was an overwhelming “Yes.” Musically, you have a band that is still gelling together with the new members. It was obvious that they are still getting cues down and working out their musical shorthand together, but the chemistry is certainly there. In fact, the band seemed happier on stage than they have in years. I’ve seen them one other time (Oakland in 2014) and the joy in 2018 is palpable. Honestly, they just seem happier on stage. I don’t know the real reason why Buckingham was kicked out of the band, but this line up seems to genuinely like playing together. That’s undoubtedly going to translate in the music, especially live.

New members Neil Finn and Mike Campbell fit in well, and the band has done a good job allowing them to take on leadership roles that their musical legacy demands. Campbell’s guitar work, as is always the case, was on fire. Mr. Campbell tends to be the quiet member that hangs back in the shadows and allow his instrument to do most of the talking for him. And talk it did. One of the highlights of the night is the one time he took lead on vocals, tearing into one of the original Fleetwood Mac lineups signature tunes, 1969’s “Oh Well.”

Mr. Finn’s talent and personality seem to fit like a glove, taking over Buckingham’s vocal duties and splitting Lindsey’s vacated guitar work with Campbell. Finn doesn’t match Buckingham’s vocal style to a “T” (who could?), but certainly holds his own. For their part, the Sacramento crowd seemed to really take to Finn’s positive and jovial vibe, saving some of the largest cheers for the man by the end of the night as he strutted around the stage and jumped off the drum riser.

Ever the showman and hype man, Mick Fleetwood continues to keep the rhythm engine running with well-oiled precision with bassist John McVie. His drum solo during “World Turning” is thrilling and pumps up the audience into a chanting frenzy.

Christine McVie’s vocal and keyboard work, much more deserving of notice–on song’s like “Little Lies” and “Say You Love Me”–than what I am giving her here, continues to deliver some of the most recognizable hits in the Fleetwood Mac catalog. When all is said and done, her absence from 1999 to 2014 cut just as deep as Buckingham’s recent departure. I’m glad she’s back.

The real star of the night though, unsurprisingly, is Stevie Nicks. The moment the reigning queen of rock ‘n’ roll walks on stage, the crowd lights up. Hits like “Rhiannon,” “Landslide,” and “Gold Dust Woman” showcase the youthful timbre in the 70 year old is still there.  I can’t tell you how many young people were at this show, excited to finally see her in the flesh. As I was leaving the arena I walked past a 16 year old girl who declared, “I can’t believe I was that close to Stevie Nicks!” This young lady is just another example of what an incredible age-diverse show this is. I suspect a lot of that had to do with the never-ending procurer of the fountain-of-youth, Stevie Nicks.

Fleetwood Mac delivered a joyous, rocking set-list that delivered the big hits spanning fifty years of rock’n’roll. My only nitpick is that they didn’t deviate from the set-list from two nights before in San Jose, CA and I wish they would have pulled out a few more deep tracks in their vast catalog, but what they presented was enough to whet the beak.

It’s hard to replace a musician of Lindsey Buckingham’s ilk, but Neil Finn and Mike Campbell did a hell of a job. If the band are really ready to start a new chapter and move away from “legacy act touring,” they should take these two men, who have produced some of the biggest hits in rock history, and have them start writing new material with Stevie Nicks and Christine McVie. Just imagine the music those four legendary songwriters would create together.

Fleetwood Mac continue their North American Tour though April. Tour dates and tickets can be purchased at www.fleetwoodmac.com/

FacebookTweet5PinEmailShares5
wpDiscuz
Share this ArticleLike this article? Email it to a friend!
Email sent!