by Christian W. Howell with Patrick A. Howell

“When I was 17, I worked in a mentoring program in Harlem designed to improve the community. That’s when I first gained an appreciation of the Harlem Renaissance, a time when African-Americans rose to prominence in American culture for the first time, they were taken seriously as artists, musicians, writers, athletes and political thinkers.” 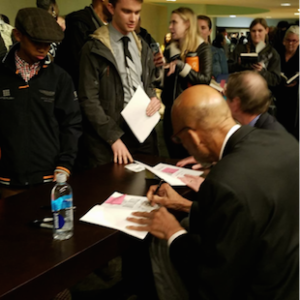 Last month on Thursday on February 22, I met the great Los Angeles Laker Kareem Abdul- Jabbar, the leading point scorer (38, 387 points) in a 20 year NBA career and arguably the best player ever because he has 8 championship rings (two as an assistant coach) – all thanks to my dad. We went to a book signing in Point Loma University at the Brown Chapel where Kareem was interviewed by Dean E. Nelson from the school of journalism to discuss his book, “Coach Wooden and Me: Our 50-Year Friendship On and Off the Court.” 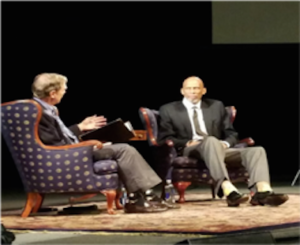 See, turns out Kareem is also a New York Times bestselling author and civil rights thinker and leader. The Great Kareem explained his life and several of his books. The books my dad purchased were “Mycroft Holmes and the Apocalypse Handbook” (a graphic novel comic book) and “What Color is my World.”, both award winning books that had some pretty big sales numbers. Funny thing is Dean E. Nelson said that Kareem is a writer who played some basketball. The Great Kareem wore on some purple and gold Laker socks to go with his writer’s suit. 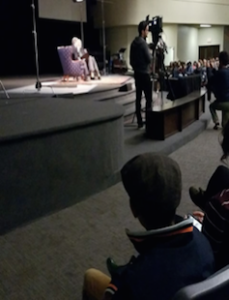 “What Color is My World” is about the “history of African American inventors”, a literary history lesson in the contribution of American scientists going back to the 1800’s. Pure fire! There are over 16 scientist that are not mentioned in my school books. Who doesn’t love ice cream?

Alfred L. Cralle invented the ice cream scoop in 1897. He received a patent for the “Ice Cream Mold and Disher.” The whole world lights up because of Lewis Latimer in Brooklyn, New York. Lewis Howard Latimer invented the light filament in 1848. Latimer closed the light bulb in a cardboard box so it would not break. If it was not for Daniel Hale Williams people with heart diseases would not be able to heal. He invented Open Heart Surgery in 1893. Open-heart surgery is when a patient’s heart is opened and internal structures are operated on. 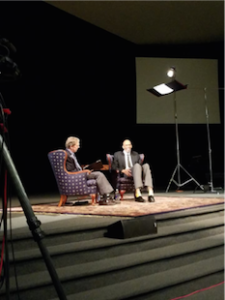 The second book we purchased was “MyCroft Holmes”. This book is about Sherlock Holmes’ brother he is an Oxford student who is on a mission to save England from an anonymous villain. He tries to be charming while he is at it. The villain wants to use an ultimate death weapon and sell it to the highest bidder.The villain also steals a handbook and book containing all the secrets to make the ultimate death weapons called the Apocalypse handbook. I got this book signed by Kareem after my Dad talked with Dean E. Nelson and I stood in line for a little while. 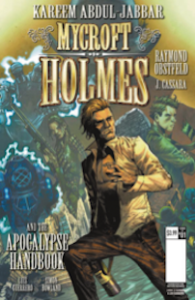 What Color Is My World?: The Lost History of African-American Inventors (Paperback)

Dean Brown noted that the writer within Kareem crystallized when he was a teenager and had the opportunity to ask Martin Luther King a question. Kareem agreed that his work as a young man, working in Harlem and how to make Harlem a better place made him the man that he is. 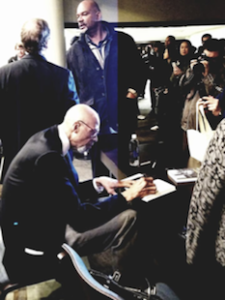 He talked about being influenced by the work of Langston Hughes, Maya Angelou, James Baldwin and Zora Neal Hurston. He was in a mentoring program where the purpose was how to use whatever in your make to make Harlem a better place – to make the world a better place. The program was started by Dr. John Henry Clark, who was named man of the year in 1963. Kareem covered the event with the press corps.

He learned that he could write from professor Lyndstrum at UCLA who read his essay to the class and that Kareem’s was the best. That’s when Kareem agreed that he had an NBA career in between. I know my dad, who loves to write took some notes from the great Kareem about what writing is about. Kareem said it is about writing, rewriting and rewriting some more.

The Great Kareem talked about getting to know your neighbor when talking about the divisive nature of today’s America. He said that all the great religions talk about the same thing – whether it’s Jesus or the prophet Muhammad: “treat others, the way you want to be treated”.

When talking about people of a different background, he talked about Coach Wooden at UCLA where he won 3 NCAA championships and is, perhaps the winningest player in American history (high school, college and professional). He said that he and Coach John Wooden had hoops and jazz music in common. Coach Wooden grew up in Indianapolis and somehow got to hear Cab Calloway and the Mills Brothers live!

Then he talked about his love for history, black cowboys, buffalo soldiers, Muslims who have helped us create our independence as Americans, Dr. Charles Drew who literally electrified home across America, the inventor of potato chips (who was black), watching fight films with Miles Davis and the time Miles Davis told Sugar Ray Robinson when he needed to quit. He talked about mentors as Bruce Lee and Wilt Chamberlain. 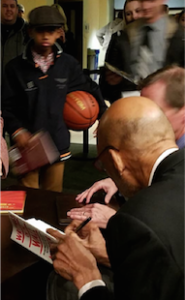 Even though he is over 7 feet and a recognized world wide basketball player, it seems Kareem’s greatest contributions will be as a writer, intellectual and leader. My Dad says he is actually part of the Harlem Renaissance. Dad says his accomplishments in the world of basketball are only a platform for his work in the realm of Civil and Human Rights. I am not really sure what that all means but I enjoyed listening to Kareem talk about his books and his life. A lot of the people- scientists, inventors and accomplished African Americans are folks my history books do not teach about. A couple of the areas in which the audience applauded, he spoke of peace and one human family.

Specifically, he said, “race is nothing more than a fake thing trying to be real.” That sentence is about the future world me and my friends will help create. My favorite quote from Kareem though is “talent only gets you so far”.

Basically, this means if you want something really badly you have to work for it. You have to love it. The Great Kareem Abdul-Jabbar will impact me in my life as a thinker, a writer and an athlete.
—

About Patrick A. Howell

Patrick A. Howell is an award-winning banker, business leader, entrepreneur and writer who lives with his wife and son in Carlsbad. His first work was published with the UC Berkeley African American Literary Review and Quarterly Black Book Review. Mr. Howell, is a frequent contributing writer to the Huffington Post and Tishman Review's Craft Talk. He has been cited in national platforms as NBC BLK and The Grio . His chapbooks 'Renaissance, Resistance, Revolution and Evolution' and 'Blue Ink Trees in the Bay' were published by Moria Press'. Both chapbooks were sent to the White House as love notes by LocoFo Chapbooks in 2017.

Howell’s book of poetry, “Yes, We Be' has been published by Jacar Books in February this month during Afro-Futurism Month.