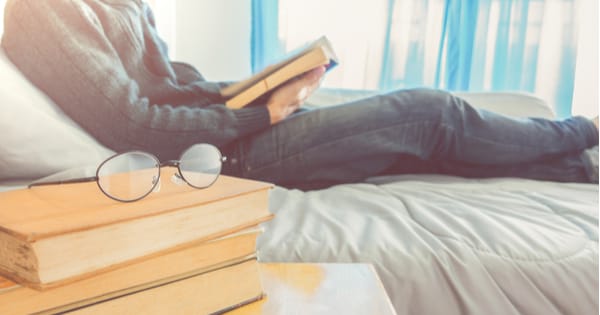 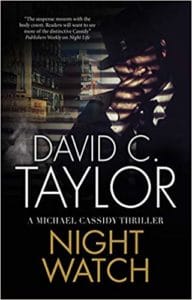 I couldn’t write a thriller. I write books and plays that are essentially love stories. That is, two people in a room. Five major characters – that’s probably my limit.

It follows that I can’t read thrillers. The complex plots elude me. The Day of the Jackal — that I understand. They want to kill de Gaulle. Will they succeed? The clock is ticking….

When David C. Taylor published the first novel of his Michael Cassidy series, a friend pressed me to read it. I began “Night Life” after dinner, thinking I’d read a few pages. I gulped it down that night. Consider: It’s New Year’s Eve, in the early ’50s. A woman in a red dress and a mink coat exits the Waldorf Astoria. But that’s no woman — it’s J. Edgar Hoover. Michael will soon be navigating Joe McCarthy’s witch-hunts for Communists, the FBI-CIA rivalry, and Soviet spies in New York. No surprise that “Night Life” was nominated in the Best Novel category for an Edgar Award and won the Nero Wolfe Award for 2016. [To read my review, click here.]

I anxiously awaited “Night Work.” It’s December, 1958, and Michael’s got a Cuban killer to transport from New York to Havana. Cuban Revolution, anyone? “Godfather II?” Here Michael is assigned to protect Castro on his first visit to New York. Unsurprisingly, businessmen and the Mafia grasp that Castro is a threat to their business and gambling interests in Cuba; they want him dead. Another thrilling night. [To read my review, click here.]

And now we have “Night Watch.” Same unlikely hero: Michael Cassidy, a brilliant and incorruptible detective, the son of a rich theater producer who lives on Park Avenue and the godson of a Mafia don. And, again, a thriller with honest-to-God facts at the center. Not that the delicious trailer says anything about the plot….

Here’s the set-up: At the end of World War II, our government imported about 1,600 German scientists. One goal was better rockets. Another was to create biological and chemical weapons, like mind-controlling drugs. The CIA used LSD to see if subjects would tell all — and if spies could be debriefed, then instructed to forget they’d blabbed secrets. In a safe house, prostitutes slipped LSD into the drinks of unwitting clients, and CIA agents watched what happened through one-way windows. Among the casualties: a CIA agent, tripping on LSD, went out a hotel window.

The story begins simply enough. Magda and Karl Brandt — in Germany, he’d been von Brandt, but “he had dropped the von in deference to the democratic spirit of the country in which they now lived” — are walking through Central Park after dinner. A hot dog vendor, a Jew who survived the Nazis, sees them. He thinks he remembers them. He’s not wrong. They kill him.

Cassidy follows up. Soon there’s a man trying to kill him. But not immediately. [To buy the book of “Night Watch” from Amazon, click here. For the Kindle edition, click here.]

The assassin is playing a private game, taking his time:

He should know it was coming for a long time. He should know why. He should have to think about it… That’s where the terror lies: thinking about death, knowing it’s coming, knowing there’s nothing you can do about it. That’s what he wanted for Cassidy. Not some flick of the switch from light to dark. Where was the joy in that? He almost f*cked the whole thing up out of impatience. Get a hold of yourself. Take your time. This was supposed to be fun.

If you love thrillers, it will be fun for you too. At a certain point, I simply lost the beat — too many characters, too much complexity for my pea brain. But I never stopped reading, never stopped marking sentences. Like these:

She’s wearing trousers, and when she walks away, it’s something to watch. Like two puppies fighting in a sack.

He looked like he’d been put together from leftovers by someone who wasn’t paying attention to the task.

Cassady had lost his gun, and he hammered the man’s face and neck with his fist. It didn’t bother the man much.

The Irish pub served pretzels, nuts, and popcorn in wooden bowls — salty snacks that encouraged another round.

His eyes were so dark that the cornea and the iris blended to one color. They were not the eyes of a dreamer.

And, not least, the Noam Chomsky quote at the beginning of the book: “For the powerful, crimes are those others commit.” Consider that a clue.