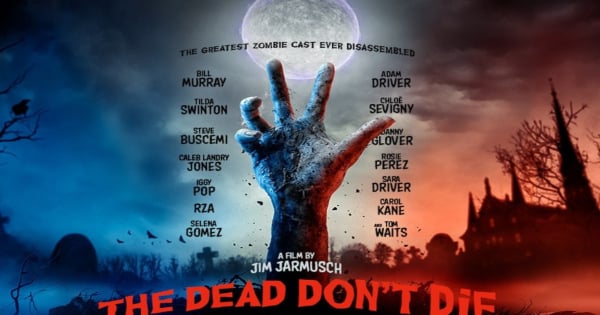 Zombieland was a very fun movie. It was different, had a talented cast and put a new spin on a familiar genre of film. When I heard about The Dead Don’t Die I thought it might be good. I was able to get a review copy and here is what I thought of it.

You can read the plot for The Dead Don’t Die here:

In the sleepy small town of Centerville, something is not quite right. The moon hangs large and low in the sky, the hours of daylight are becoming unpredictable and animals are beginning to exhibit unusual behavior. No one foresees the strangest and most dangerous repercussion that will soon start plaguing the town: THE DEAD DON’T DIE – they rise from their graves and savagely attack and feast on the living – and the citizens must battle for their survival.

I wasn’t too impressed with this movie. It starts off really slow, and took a good while to get interesting. As they story moved forward it began to take itself less seriously. This movie was also never really that funny, just ridiculous and kind of weird at parts. With such an amazing cast I had hoped to like it more, but that wasn’t possible. Some people may like this film but I wouldn’t recommend it.

Facebook1Tweet1Pin3EmailShares5
wpDiscuz
Share this ArticleLike this article? Email it to a friend!
Email sent!