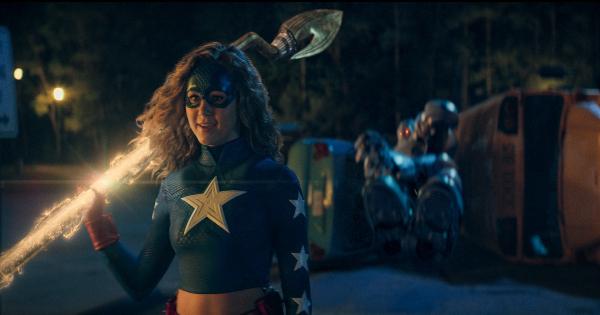 A powerful enemy has Stargirl in their sights in ‘Stripe’

Last time on Stargirl, Courtney found herself moved to a small town. She wasn’t too thrilled about it, and was having a hard time making friends. Things turned around a bit once she found a mysterious staff. This discovery made her think she knew what her purpose might be. It also drew the attention of a powerful enemy. Now she becomes the target of this foe in ‘Stripe’. I was able to watch a screener of this episode and here is what I thought of it.

You can read the premise for ‘Stripe’ here:

After Courtney has an unexpected run-in with a member of the Injustice Society of America, Pat reveals the truth to her about their history. Meanwhile, Barbara is elated when she sees Courtney making an attempt to get along with Pat, not knowing the secret they’ve been keeping. Finally, things take a dangerous turn at Blue Valley High’s open house night when Courtney becomes the target of a dangerous foe.

Courtney has an important talk with Pat in ‘Stripe’. After he helped her last time in a fight, naturally she had some questions. They talked about who was fighting her, and how dangerous they truly were. He forbade her to use the staff and become a hero, but she decided to do it anyway. Once this foe learned her true identity, she found out she might not be able to stop them by herself. She made herself a new costume, and somehow found a way to take this bad guy down. As this episode comes to a close it looks like someone even more powerful has returned to town.