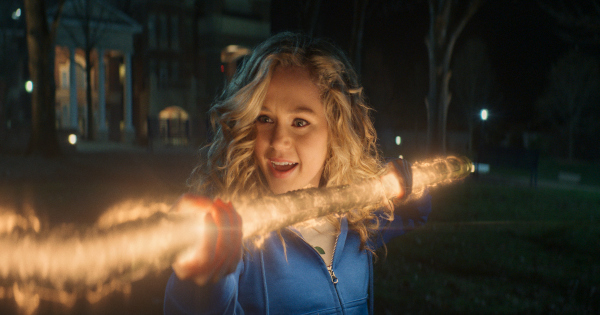 A teenage girl finds a magical object in ‘Stargirl’

I have been pretty impressed with most of the DC Universe shows. They take lesser known heroes and villains, and bring them together to tell some amazing stories. When I heard about Stargirl I was looking forward to watching. I was able to get a screener for the pilot episode and here is what I thought of it.

You can read the premise for the pilot episode here:

Courtney’s seemingly perfect life in Los Angeles gets upended with a move to Blue Valley, Nebraska with her mother Barbara, stepfather Pat Dugan and stepbrother Mike, and she finds herself struggling to adapt to her new town and high school. But when Courtney discovers that Pat is harboring a major secret about his past, she ultimately becomes the unlikely inspiration for a new generation of Super Heroes.

This pilot did a good job giving this series a strong start. We see a simple teenage girl who moves with her family to a small town. She wishes she wasn’t there, and has a hard time making new friends. Once she finds a magical object, it will change her destiny forever. We also learn a bit about her father’s mysterious past, and how they came to an untimely end. As this pilot came to a close, it looked like Courtney might be in big trouble.

Facebook5TweetPin3EmailShares8
wpDiscuz
Share this ArticleLike this article? Email it to a friend!
Email sent!