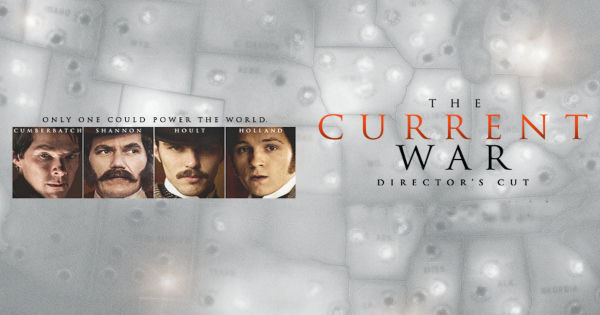 A riveting story gets told in ‘The Current War’

I have seen a number of movies based on historical figures lately. Most of the time, if done right, they can tell a great story. I really enjoyed Harriet, yet I wasn’t that impressed by Ford V Ferrari. When I heard about The Current War I hoped I might get to see it. I was able to get a digital copy of this movie and here is my thoughts on it.

You can read the plot for The Current War here:

The epic story of the cutthroat competition that literally lit up the modern world. Benedict Cumberbatch is Thomas Edison, the celebrity inventor on the verge of bringing electricity to Manhattan with his new DC technology. On the eve of triumph, his plans are upended by charismatic businessman George Westinghouse (Michael Shannon), who believes he and his partner, Nikolai Tesla (Nicholas Hoult), have a superior idea for how to rapidly electrify America: with AC current. As Edison and Westinghouse grapple for who will power the nation, they spark one of the first and greatest corporate feuds in American history.

This was a pretty good film. To learn about these two moguls and the feud they had was pretty interesting. It wasn’t always clear who might come out on top, and the victor surprised me a bit. Yet as this story came to a close, we saw the world change forever. I can’t say everyone will like this film, but some people are sure to enjoy it.