Get Daily Email
Join/Login CLOSE
Home / A&E / Three Smartypants Friends Had Never Heard of the Author. Maybe You Too. Let’s Correct This Now. 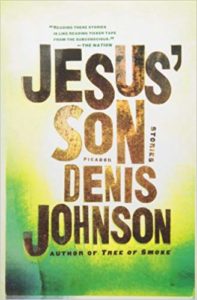 “Jesus’ Son” is one of the ten funniest books I’ve ever read.

A guy has a knife stuck in his eye; a drugged-out hospital orderly saves him without quite knowing what he’s done.

Another guy gets shot in a farmhouse, for no reason.

Prison looms for everyone.

And it all takes place in the gloomy flatland of the Midwest, circa 1971.

You sputter: This is a bummer. Indeed it is. And if you think heroin addiction is tawdry (and it is, it is) and the people who use hard drugs are losers (and they are, they are) and there is Nothing Funny about an overdose, then these eleven stories are so not for you.

But if you have a taste for Black Humor or an appreciation of outlandish characters — or even an ear for brilliant writing — this 160-page book will give you the most delightful two-to-three hours of reading you’ve experienced in a long, long time. Well, maybe not three hours. Maybe a lot more — for if, like me, you occasionally find yourself in need of the kind of laugh that only a book can provide, your eye goes instinctively to “Jesus’ Son.” Your hand involuntarily removes it from the shelf. And before you know it, you’re lost in the world of this remarkable book. [To buy the paperback from Amazon, click here. For the Kindle edition, click here.]

Let’s just consider the first story, “Car Crash While Hitchhiking.” It is exactly that. The narrator is a hitchhiker who, on one leg of his trip that day, has been fed pills by a salesman. He is now wired and omniscient:

I knew every raindrop by its name. I sensed everything before it happened. I knew a certain Oldsmobile would stop for me even before it slowed, and by the sweet voices of the family inside that, we’d have an accident in the storm.

The accident occurs. The driver dies. His wife survives. Now we’re at the hospital:

Down the hall came the wife. She was glorious, burning. She didn’t know yet that her husband was dead. We knew. That’s what gave her such power over us. The doctor took her into a room with a desk at the end of the hall, and from under the closed door, a slab of brilliance radiated as if, by some stupendous process, diamonds were being incinerated in there. What a pair of lungs! She shrieked as I imagined an eagle would shriek. It felt wonderful to be alive to hear it! I’ve gone looking for that feeling everywhere.

And then comes an ending that confounds all expectation:

It was raining. Gigantic ferns leaned over us. The forest drifted down a hill. I could hear a creek rushing down rocks. And you, you ridiculous people, you expect me to help you.

That last line — directly addressed to the reader — announces that these will not be “traditional” stories, with characters who describe their troubles and fix them. This is a world of the lost: freaks abandoned by God, people who connect with holiness only (in the words of the Lou Reed song that provides the title) “when I’m rushing on my run.”

The power of these stories is the writing, first and foremost, but there is also the sense that these stories are real. As Johnson recalls, “I was addicted to everything….When I was 21, I went into my first psych ward for alcohol.” Then he moved on to drugs. “But I was not a constant junkie. You can’t just go into a drugstore and say, ‘I’ll have some heroin, please.’ You have to be prepared to enter into all kinds of adventures that I wasn’t strong enough for.”

Those adventures included study at the University of Iowa with Raymond Carver. He wrote “Jesus’ Son” because he owed the IRS $10,000 and had these stories in his head:

I never even wrote that book, I just wrote it down. I would tell these stories apropos of nothing about when I was drinking and using and people would say, “You should write these things down.” I was probably 35 when I wrote the first story. The voice is kind of a mix in that it has a young voice, but it’s also someone who’s looking back. I like that kind of double vision. So I worked on them once in a while, then I started using stories I heard other people tell, and then I started making some up. Pretty soon it was fiction. Then I just forgot about it. I thought, I’m not going to parade my defects, my history of being a spiritual cripple, out in front of a lot of other people. But once in a while, I’d write a little more — I would just hear the voices.

Johnson wrote more books, and great ones, but “Jesus’ Son” is the one that readers cherish. Is it that there’s something about hair-raising stories told by addicts that we just can’t resist? Or is it just the voices? Either way, these stories are…addictive.

A recent piece in the Times — Does Recovery Kill Great Writing? — gave me a new way of looking at this book and at Johnson’s career:

Three years after I got sober, I found myself teaching Denis Johnson’s stories to a classroom of college students in Connecticut: another circle of chairs full of people listening to tales of drugged-out misadventure. My students seemed unspeakably cool — they spent their weekends finding their spirit animals and doing drugs I’d never heard of — and I was desperate to earn their affection. On the first day of class, I brought two dozen doughnuts and a cardboard box of coffee, and then I kept bringing them each week, afraid that if I stopped, the students would be disappointed. When we read Johnson’s stories about barflies and hallucinated visions, I could see myself a decade earlier, convinced that these fever dreams had a monopoly on creative brilliance, these farmhouses full of pharmaceutical opium and outdoor movie screens lit by the gigantic faces of angels. I asked the class if they had a favorite story from the collection. “Don’t worry,” I said. “There’s no right answer.”

But I was lying. There was a right answer. Their favorite story was supposed to be my favorite story, which was now “Beverly Home” — the only one about recovery. Johnson’s protagonist is finally sober and working at a rehabilitation center for the elderly and disabled, where he spends his days walking the O-shaped circuit of its lobby with the patients: “All these weirdos, and me getting a little better every day right in the midst of them,” he says. “I had never known, never even imagined for a heartbeat, that there might be a place for people like us.”

I read that line, the closing line of the story, aloud to my students. I read it — once, twice, three times — while they quietly swept up their doughnut crumbs. There might be a place for people like us. Every voice I’d ever heard in meetings echoed in that closing line. Maybe some of my students found it sappy or maudlin, that sense of belonging, but my heart swelled righteously against their imagined accusations. The story believed in something besides the self-immolating antics of dysfunction — their flickering, intoxicating glow. It was gazing somewhere beyond the horizon, past the blaze.

Johnson, who died last year, first tried to dry out in 1978, in his parents’ home in Tucson, where he was living with his eccentric grandmother Mimi, but he didn’t get sober for good until the early 1980s. “I was addicted to everything,” he said decades later. “Now I just drink a lot of coffee.” At first Johnson was “concerned about getting sober,” and knew this was “typical of people who feel artistic.” But he wrote only two stories and a few dozen poems in 10 years while he was actively using, so he figured he didn’t have much to lose. In the first decade after he got sober, he produced four novels, two collections of poetry, a collection of stories and a screenplay.

His was the arc I’d been looking for: the possibility of sobriety as jet fuel. In his archives, I found a letter a younger writer sent him in 1996: “I want to thank you for your unfailing support and friendship in helping me get acquainted with my alcoholism. It seems there are two kinds of American writers. Those who drink, and those who used to. You introduced me to the latter. Thanks, brother.”

In an early draft of “Beverly Home,” Johnson wrote: “Approval was something I craved more than drugs or alcohol, and I hadn’t been able to get it in the bars, but it seemed attainable in the rooms.” He meant the rooms of recovery. That early draft shows his ragged, stuttering attempt to articulate that transformation:

I had sobered up just in time to have a nervous breakdown. I had no idea

I was a whimpering dog inside. nothing more than that.
—
Denis Johnson’s obituary was written in a state of surprise — he was only 67 when he died in 2017.