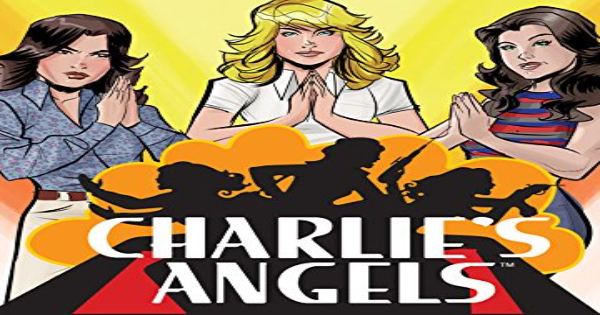 I know a bit about Charlie’s Angels. I can’t say I have watched much of the TV show, but I did see one of the movies. It had a great cast and took viewers on a thrilling adventure. When I heard about ‘Charlie’s Angels’ Vol 1 I was hoping I would get to read it. I was able to get a digital copy of this graphic novel and here is what I thought of it.

You can read the plot for ‘Charlie’s Angels’ Vol 1 here:

The Angels are back, baby! -The original Angels, Jill, Kelly and Sabrina! Travel back to the swingin’ 70s, and revisit the butt-kicking, crime-fighting, mold-breaking lady detectives who took 70s TV by storm, ready to do the same to comics 40 years later!

Break out your bell-bottoms, feather your hair, and jump back to a era of peanut-farmer presidents, gargantuan gas-guzzlers and foxy female detectives… for a globe-trotting adventure that’s simply too big and epic for the 70s-era boob tube.

I had a blast reading ‘Charlie’s Angels’ Vol 1. This graphic novel was broken into 5 parts, and did a splendid job telling this story. These women found themselves on their toughest mission yet, and surviving it was going to take every skill they have. They face some dangerous people and end up taking some big risks. As this graphic novel moves towards its finale they find a way to make this mission a success. I really liked the ending, it was unexpected and a great way to end this tale. If you are a fan of these characters then you will want to check this graphic novel out.

‘Charlie’s Angels’ Vol 1 comes out February 12th. You can pre-order this graphic novel on Amazon and at Barnes and Noble.