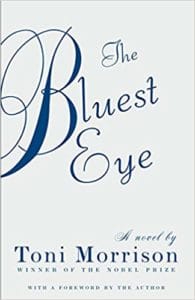 When our daughter was in the ninth grade, her English class read Toni Morrison’s “The Bluest Eye.” It’s a novel and then some, packed with drama and ideas. Here’s Morrison, looking back on it:

“It’s about a little black girl, Pecola Breedlove, who wanted blue eyes. I wanted to take the name of Peola—the ‘tragic mulatto’ character from the 1934 movie ‘Imitation of Life’— and play with it, turn it around. When I was young another little black girl and I were discussing whether there was a real God or not. I said there was, and she said there wasn’t and she had proof: she had prayed for, and not been given, blue eyes. I just remember listening to her and imagining her with blue eyes, and it was a grotesque thing. She had these high cheekbones and these great big slanted dark eyes, and all I remember thinking was that if she had blue eyes she would be horrible.”

I read what our daughter reads, and then we compare notes. It’s illuminating. She had no affection for “The Catcher in the Rye.” Heresy? I thought so. But this time around I saw Salinger’s novel stalls badly halfway through — it’s drab and repetitive after that. And I got it. Salinger was a sprinter, a short-story writer; a novel was beyond him. Morrison? Definitely a novelist. Who doesn’t burn a calorie trying to appeal to kids in New York private schools.

The day our daughter finished the third draft of her paper about “The Bluest Eye” was a good one in our family — hard work had yielded a closely reasoned piece. That night was the Author’s Guild benefit. And there, across the room, was Toni Morrison.

I did what I never do. I went over to Toni Morrison, and as Sonny Mehta looked on, not quite approvingly, I told her that our daughter had grappled with her book and been improved by the effort. I was holding the program. Toni Morrison took it and signed it. Framed, it now occupies a place of honor next to an autographed photo of Mariksa Hargity.

Toni Morrison won every prize imaginable. When she won the Nobel, Mary Morris recalled this:

I was teaching at Princeton when Toni Morrison was awarded the Nobel Prize in Literature. We were all in the office waiting for her with baited breath when she walked in, set her fierce gaze on our director and said, “I’m going on leave next year. Does anyone have a problem with that?” In awe and silence we all shook our heads as Jim Richardson laughing, said “No, Toni. I don’t have a problem with that.” Tons of media were planted in front of her classroom and she gave them a five-minute interview, then excused herself. “I have a class to teach.” According to her students she taught the class as she would any other day.

If you’ve never read Toni Morrison, “The Bluest Eye” is a good place to start. [To buy the paperback from Amazon, click here. For the Kindle edition, click here.]

Next, I’d suggest “Beloved.” It entered my dreams when I read it. It’s that haunting. [To buy the paperback, click here. For the Kindle edition, click here.]

This seriously good documentary about Morrison, “The Pieces I Am, “ may still be in theaters. Or may be brought back. It’s available on Amazon on September 17. [To pre-order it, click here.]

The timing of Toni Morrison’s death is not without some irony – just days after a gun massacre in Texas that was all about race. She had a clear take on that subject:

“What are you without racism? Are you any good? Are you still strong? Are you still smart? You still like yourself? If you can only be tall because somebody is on their knees, then you have a serious problem. And my feeling is white people have a very, very serious problem, and they should start thinking about what they can do about it.”

It would have been great to see her, one last time, say those words.