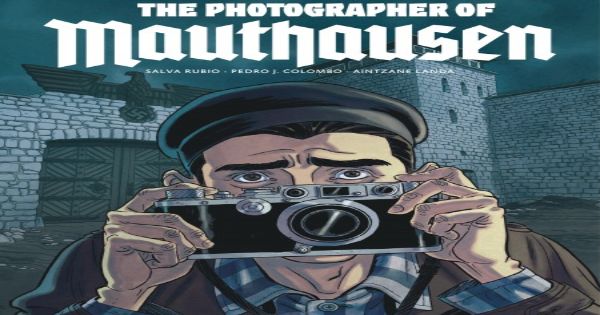 A man tells a tough story in ‘The Photographer of Mathausen’

War is always a tough topic to discuss. In this country’s past, lots of blood has been shed in war time. There are lots of stories during these times that have still not been told. One such story comes to life in The Photographer of Mathausen. I was able to get a digital copy of this graphic novel and here is my thoughts on it.

You can read the plot for The Photographer of Mathausen here:

This is a dramatic retelling of true events in the life of Francisco Boix, a Spanish press photographer and communist who fled to France at the beginning of World War II. But there, he found himself handed over by the French to the Nazis, who sent him to the notorious Mauthausen concentration camp, where he spent the war among thousands of other Spaniards and other prisoners. More than half of them would lose their lives there. Through an odd turn of events, Boix finds himself the confidant of an SS officer who is documenting prisoner deaths at the camp. Boix realizes that he has a chance to prove Nazi war crimes by stealing the negatives of these perverse photos—but only at the risk of his own life, that of a young Spanish boy he has sworn to protect, and, indeed, that of every prisoner in the camp.

This was a pretty amazing story to read. When I first started it, I will admit I wasn’t sure what to expect of it. The story it tells is an important one, and it has plenty of violent moments. This graphic novel helps brings this story to life, and tells how a man survived a terrible ordeal. This won’t be a graphic novel for everyone, but some people might enjoy it.

The Photographer of Mathausen is available now. You can order this graphic novel on Amazon, at Barnes and Noble and Indiebound.