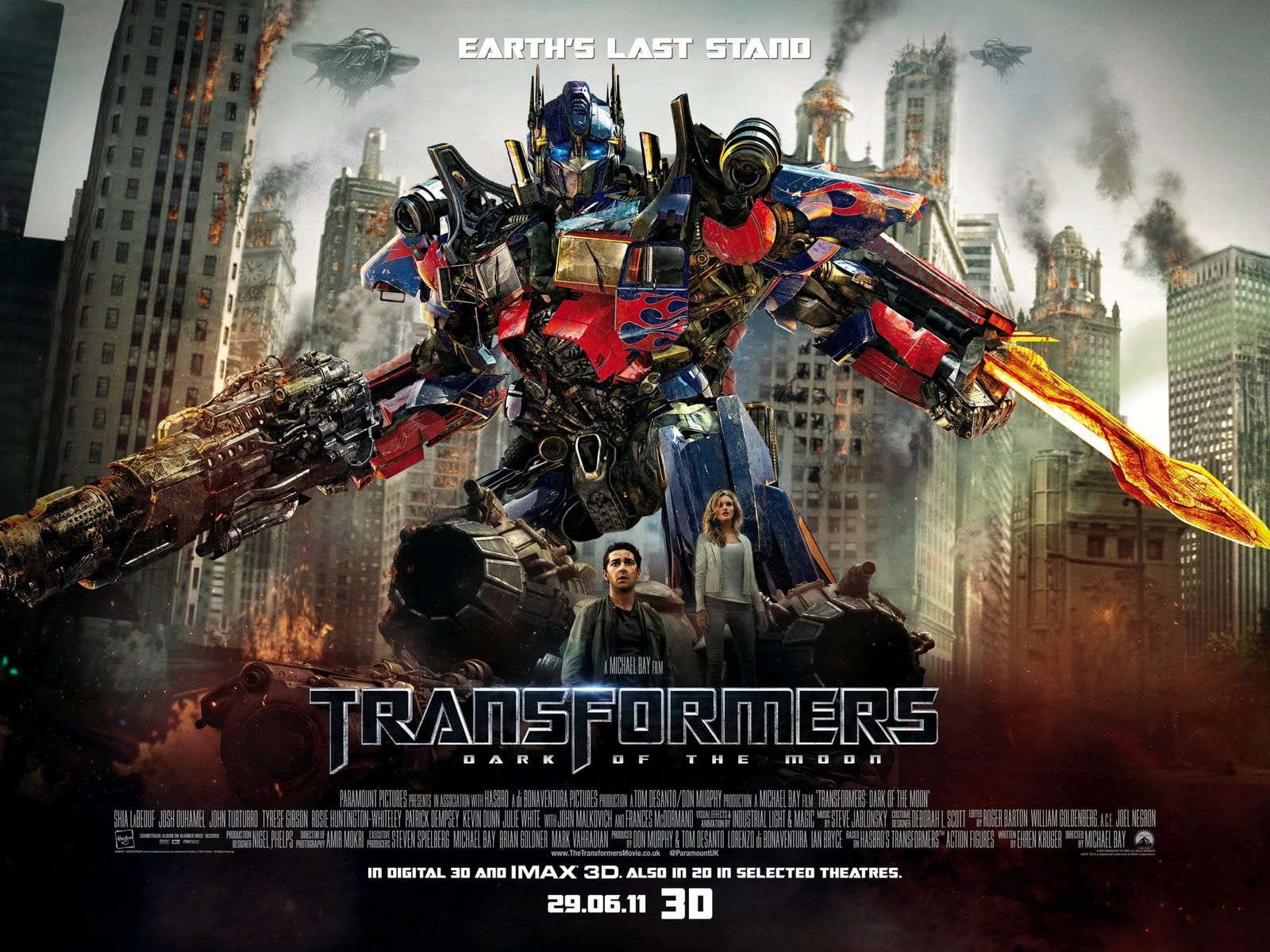 In the climactic battle, clashing metal against metal, the voice of Leonard Nimoy says, “The needs of the many always outweigh the needs of the few.” No, this is no remake of “The Wrath of Khan”. Nimoy voices the duplicitous ancient Autobot leader Sentinel Prime, in Director Michael Bay’s visually spectacular “Transformers: Dark of the Moon”. This is the first “Transformers” movie for me. I could not get through the first “Transformers” on DVD, and passed on “Revenge of the Fallen”. Michael Bay gets the job done in “Transformers 3″—impeccable action set at hyperkinetic pace. Bay bludgeons sensory overload as his narrative style—and it works for him. We hardly notice the 2 hours and 37 minutes. Neither do we notice the absence of Meg Fox, who lost her invite. Victoria Secret model stunning Rosie Huntington-Whiteley assumes her place as Shia LaBeouf’s Sam’s girlfriend. Huntington-Whiteley is hotter. We see her Carly introduced as she walks in wearing Sam’s shirt and a thong. This punctuated my error in not going with the 3D option.

Bay filmed “Transformers: Dark of the Moon” in digital 3D. No post-production afterthought. The movie looks awesome. The visuals are breathtaking. Bay creates a swirling visual mural as Decepticon drones and airships float above a devastated Chicago. In a very cool aerial sequence, Lt. Col. Lennox (solid Josh Duhamel) and his Special Forces Team dart through the Chicago skyline in their glider jumpsuits. The climactic battle between Optimus Prime (noble Peter Cullen) and his betrayed mentor is a live action samurai anime spectacle. As imposing gleaming gladiators, the Autobots and Decepticons move as graceful warriors. Bay brings back action old school. As a director he is the masterful technician—the human elements are not his strong suit. Then again human drama is not the deal with “Transformers 3”.

The story by Ehren Kruger is surprisingly engrossing, albeit flimsy. Like “X-Men: First Class” Kruger’s tale is convincing revisionist conspiracy of the 1960’s. Context: The Autobots and Decepticons are sentient robots, who are mortal enemies. Nearing Autobots demise at the hands of the Decepticons on home world Cybertron, Autobot leader Sentinel Prime (Nimoy) escapes in a ship called the Ark carrying the technology that could vanquish the Decepticons. With his mission thwarted, the Ark and Sentinel Prime crash on the Dark Side of the Moon. Detected in 1961, the Kennedy Administration declares the Space Race which was really a covert government operation to retrieve possible alien technology from the Moon. In 1969 the moon mission accomplished the intended goal. Now present day, Sec Def Mearing (callous and commanding Francis McDormand) is well aware of that NASA mission, and the presence of her peacekeeper Transformers under her watch. Turns out in this 50 year conspiracy, the Decepticons too have their human allies.

Shia LaBeouf is convincingly frustrated and funny as Sam Witwicky, and rightly so. As Sam he had saved the world from the Decepticons, and received the Medal of Honor from President Obama, all on the down low. So this Ivy League graduate and Earth’s savior struggles to find a job. In the meantime he is living with his super hot girl friend Carly (Huntington-Whiteley). Carly works for charming and arrogant accounting magnate Dylan (slickly menacing Patrick Dempsey), whose intentions are opaque. Sam manages to get a menial job at high tech government contractor working for eccentric John Malkovich as Bruce Brasos.

While this transpires, Josh Duhamel’s intense fearless Lennox leads his Special Forces team to investigate transient readings from Chernobyl in the Ukraine. This unveils the global Decepticon threat, and the reemergence of leader Megatron (reliably evil Hugo Weaving).

So the narrative mechanics are poised to intersect, which is really Bay’s excuse to blow crap up with amazing style. Bay brilliantly plays to his strong suit. In the midst of all the stunning visuals and breastbone vibrating explosions, the acting leads are solid. LaBeouf performs dependably as his subdued Sam transforms into the hero with vulnerability and a sense of humor. Too bad Duhamel isn’t asked to do more. He is leading man handsome, charismatic, and brilliantly underplays the thoughtful hero. Rosie Huntington-Whiteley is beautiful, which seems to be the leverage point of Carly. She does so with unaffected presence, and touch of humor. Dempsey plays in position. Tyrese Gibson, relegated to second string, is always cool. Gibson may be the smartest and luckiest actor in Hollywood next to Robert Downey Jr., being in two mega franchise movies—the other being “Fast Five”.

Bottom line: “Transformers: Dark of the Moon” is a great summer movie. You shall be entertained.