Get Daily Email
Join/Login CLOSE
Home / A&E / Viktor Frankl Walked Out of a Concentration Camp With a Powerful Message We Need More Than Ever. 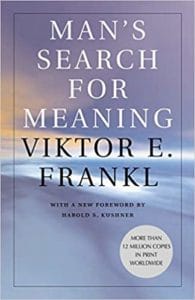 Hitler had already occupied Austria when Viktor Frankl, a young Viennese psychiatrist, and writer, learned that the United States had approved his request to immigrate. His parents were overjoyed — their son would escape the Nazis, go off to America and continue his brilliant work.

Frankl was feeling guilty about leaving his parents when he noticed a piece of marble on a table at home. What was it? His father identified it as a piece of the largest synagogue in Vienna, burned by the Nazis. On it was a fragment of the Ten Commandments — the part about honoring thy father and mother.

In this case, paper did not cover rock. Frankl decided to stay in Vienna and look after his parents. As if that were possible! Before the war was over, the Nazis imprisoned Frankl, his pregnant wife, his brother and his parents. All but Frankl perished.

In 1945, in just nine days, Frankl wrote “Man’s Search for Meaning.” It has sold tens of millions of copies, been published in dozens of languages, been named as one of the 10 books you must read — for many, it’s been a life-changer. Somehow, I missed every opportunity to read it. Just as well. My younger selves might have missed the profundity of this short, simple book. [To buy the paperback from Amazon, click here. For the Kindle edition, click here.]

Frankl’s message is simple: Life can be terrible. But there is one power you alone possess — the power to decide what you think about your situation. If you think there is a point to your suffering and if you can imagine your life on the other side of it, you are searching for meaning.  More, you are finding meaning, for the very act of searching ennobles you. Achievements can pile up, riches may come your way — none of that matters. The search is everything.

For Frankl, the search for meaning is both a philosophy and an attitude. Going into a concentration camp, he knew what the odds were — 90% of the people on his transport train would die, most within a few hours of arriving at Auschwitz. And this led him to his first breakthrough: “I struck out my whole former life.”

Auschwitz became his teacher. He had no fear of death; the gas chambers spared him the thought of suicide. He learned to look eager for work; if you want to live, you have to be useful. And then he learned The Secret. Let him tell it:

We stumbled on in the darkness, over big stones and through large puddles, along the one road running through the camp. The accompanying guards kept shouting at us and driving us with the butts of their rifles. Anyone with very sore feet supported himself on his neighbor’s arm. Hardly a word was spoken; the icy wind did not encourage talk. Hiding his hand behind his upturned collar, the man marching next to me whispered suddenly: “If our wives could see us now! I do hope they are better off in their camps and don’t know what is happening to us.”

That brought thoughts of my own wife to mind. And as we stumbled on for miles, slipping on icy spots, supporting each other time and again, dragging one another on and upward, nothing was said, but we both knew: each of us was thinking of his wife. Occasionally I looked at the sky, where the stars were fading and the pink light of the morning was beginning to spread behind a dark bank of clouds. But my mind clung to my wife’s image, imagining it with an uncanny acuteness. I heard her answering me, saw her smile, her frank and encouraging look. Real or not, her look then was more luminous than the sun which was beginning to rise.

A thought transfixed me: for the first time in my life I saw the truth as it is set into song by so many poets, proclaimed as the final wisdom by so many thinkers. The truth — that love is the ultimate and the highest goal to which man can aspire. Then I grasped the meaning of the greatest secret that human poetry and human thought and belief have to impart: The salvation of man is through love and in love.

I understood how a man who has nothing left in this world may still know bliss, be it only for a brief moment, in the contemplation of his beloved. In a position of utter desolation, when a man cannot express himself in positive action, when his only achievement may consist in enduring his sufferings in the right way–an honorable way–in such a position man can, through loving contemplation of the image he carries of his beloved, achieve fulfillment. For the first time in my life, I was able to understand the words, “The angels are lost in perpetual contemplation of an infinite glory.”

Frankl was lucky, and he knows it; as he says, “The best among us did not return.” But the lucky did. Indeed, only the lucky did. And isn’t a great part of luck the irrational belief of a better future?

Like all concentration camp memoirs, Frankl’s is one horror after another. But unlike almost all others, his memoir is dotted with remarkable scenes. Like the time a block warden, at a very low point in the war, asks Frankl to speak to the inmates. Frankl reminds them that all they have lost can be achieved again. And then he says something at once shocking and inspiring: “Human life, under any circumstances, never ceases to have meaning.” Even hopelessness offers a kind of dignity. If we act well in dire straits, we honor God — we show that, even as we are killed, we maintain our dignity. That was some sermon….

Days after the war ended, Viktor Frankl walked out of the camp and into the countryside. He listened to the birds sing; he felt the expanse of earth and sky. He did not yet know that the wife he thought of constantly was dead. He had just one sentence running through his head: “I called to the Lord from my narrow prison and he answered me in the freedom of space.” And with that, Frankl entered his future.

It doesn’t get much simpler than that, does it?