Get Daily Email
Join/Login CLOSE
Home / A&E / West Side Story, The King & I, Fiddler on the Roof, Gypsy — Know Who I’m Talking About? 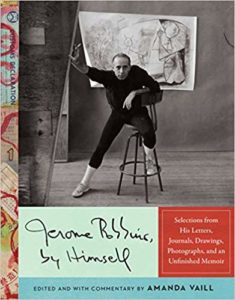 Amanda Vaill is a friend of many years, but I am also among her biggest fans — as a biographer, she’s peerless. I came to this conclusion after reading Everybody Was So Young, her biography of Gerald and Sara Murphy, who turns out to be even more interesting than everybody’s favorite 1920s couple, Scott and Zelda Fitzgerald. I devoured Hotel Florida: Truth, Love, and Death in the Spanish Civil War, which told an old story through the intersection of a few high-profile lives: Ernest Hemingway, Martha Gellhorn, John Dos Passos, and Robert Capa.

“Somewhere” is 531 pages long. I hate long books, but I devoured every page. Amanda Vaill’s new book, “Jerome Robbins, by Himself: Selections from His Letters, Journals, Drawings, Photographs, and an Unfinished Memoir” is a little shorter — just 488 pages — but photographs occupy many of those pages. And Vaill’s introductions to each section can be viewed as a cheat sheet to her biography. If you’re a math-minded person, that means you get 1,000 pages of great reading at half the length. [To buy the book of “Jerome Robbins: By Himself” from Amazon, click here. For the Kindle edition, click here.]

Jerome Robbins was a prolific correspondent, inveterate journal keeper, perceptive critic, dramatic scenarist, whimsical (sometimes ribald) versifier, even confessional fiction writer. He wrote about his identity (artistic and sexual), his background, his aspirations, his conflicts. He wrote to, and about, his family, his lovers, and his friends and associates — including the playwright Arthur Laurents, the choreographer George Balanchine, the ballerina Tanaquil Le Clercq, the composer Leonard Bernstein, the novelist and poet Robert Graves, the writer and impresario Lincoln Kirstein, the actor Laurence Olivier, the novelist Edna O’Brien, the director Ingmar Bergman, and scores of others, some professionally connected to him, some not. He wrote in airplanes and on trains, at home and while traveling. He wrote for his correspondents, for the public, and for himself. His personal papers consume 100 linear feet of shelf space, and the professional papers take up a further 141; this archive, which is part of the Jerome Robbins Dance Division at the New York Public Library for the Performing Arts, includes an array of material that reveals Robbins to have been not only an expressive writer by any measure, with a unique voice, but also an avid photographer…

You get the idea. Vaill’s research took her to the bottom of the ocean; she returned with pearls. If you love ballet, one of these books is for you. And if you like the rich in France in the 1920s or the Spanish Civil War in the 1930s, you can start your very own Vaill collection.
—