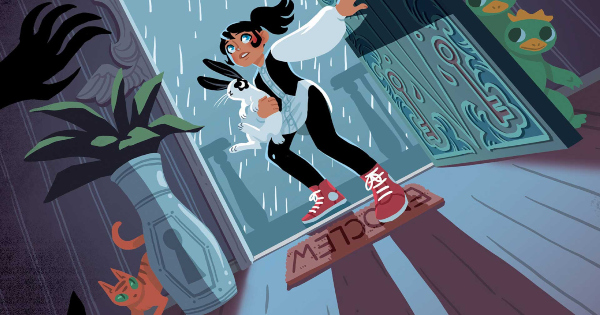 Prepare to go on a magical journey in ‘House of Secrets’

I first met Zatanna when she was on the Justice League cartoon series. When a magical villain would show up, she was usually one of the people called to help. Over the years we have learned more about her in Young Justice and in the Justice League Dark animated movie. Now you can learn some new things about her in ‘House of Secrets’. I was able to read a digital copy of this graphic novel and this is what I thought of it.

You can read the plot for ‘House of Secrets’ here:

Zatanna and her stage magician father live in a special house which is full of magic, puzzles, mysterious doors, and storybook creatures–it’s the house everyone in the neighborhood talks about but avoids.

At school one day, Zatanna stands up to a bully and everything changes–including her friends. Suddenly, Zatanna isn’t so sure about her place in the world, and when she returns home to tell her father, he’s gone missing, lost within their own home.

It was a lot of fun reading this graphic novel. We get to see Zatanna as a teen, as they are just finding out they have magical powers. Once her father turns up missing, the story really gets interesting. She meets Klarion, and ends up with an ally who might be able to help her find her dad. They run into all kinds of magical things together, and there are moments when it looks hopeless. If you are a fan of Zatanna then this is a graphic novel you will want to read.

Zatanna and the House of Secrets is available now. You can order this graphic novel on Amazon and at Barnes and Noble.