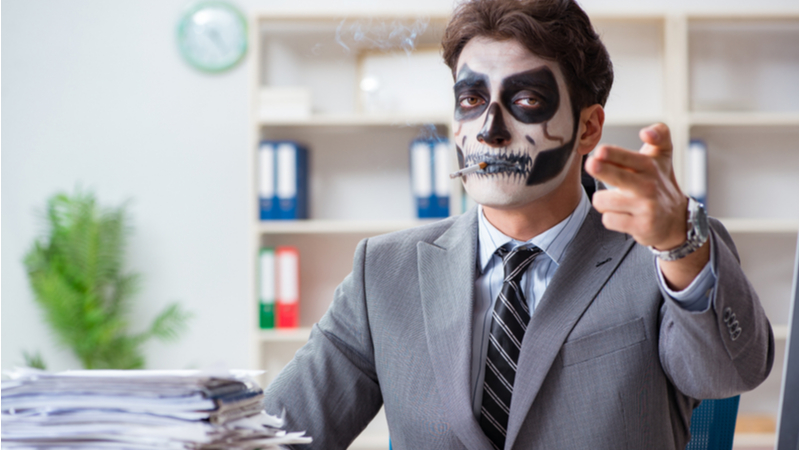 How do YOU deal with a “monster manager”? They can be described as malicious, abusive, vicious, or any number of unflattering terms. They might discriminate, harass, bully, steal, lie, embezzle, commit fraud and other misconduct.

Put simply, monster managers (as I call them) are bad news for employers — not to mention for the aggrieved workers who suffer under their wrath.

It only takes one rogue monster manager to make an employee’s work-life miserable and intolerable, poisoning an otherwise ethical work culture. Yet there are likely tens of thousands of workers worldwide who are regularly targeted for management abuse or worse. Moreover, this troublesome trend does not appear to be dissipating (see statistics below).

From a corporate perspective, monster managers bring a heightened risk of legal liability, bad publicity and a diminished brand image — all of which hurts the bottom line. In short, nobody wins by supporting, condoning or ignoring the heinous actions of monster managers. Yet the problem persists.

In my recent open “Memo to CEOs” urging them to be more mindful, vigilant and proactive in rooting out monster managers and firing them when appropriate.

As noted in the prior post, monster managers can wreak havoc in the workplace with damaging results for the corporate culture, including:

Many monster managers thrive in companies with unethical work cultures. These organizations have lax procedures regarding professional standards of conduct, HR policies, diversity training, commitment to equal opportunity, and internal complaint systems, for example. In fact, some small businesses might not be able to afford in-house legal counsel or human resource departments to keep them out of trouble.

Many professionals shared their important views and insights about this perpetual problem, per the previous post. Here’s a small sampling of the most popular comments:

Ritika Nijhawan replied, “Yes, I have come across such managers in my career. I think the only way to deal with them is by finding another job where you feel appreciated and valued. The fact such managers are allowed to grow and prosper in your company says a lot about the workplace culture.”

Rob Jones pointed out: “The population of predatory and abusive coworkers, supervisors and managers isn’t decreasing, but is in a meteoric rise, often referred to these days as ‘epidemic.’ It is often viewed as a way to get ahead.” He also cited an important study on the rise of workplace bullying.

Erroll Warner noted he, “Just can’t understand why companies are so in love with bad managers. I really don’t understand it to say the least. Complaining about your bad boss could get you thrown out on the sidewalk.”

Jeff Rock summed it up nicely: “The cost to business and human lives is staggering. We are rapidly approaching a tipping point when businesses will be unable to compete if they enable their monsters. Top talent will not go there, and when you lose top talent, you lose creativity, then you lose innovation.”

Susan Gainen commented: “I have thought for years that fear of costly litigation would help senior managers wrangle their monsters. Sadly, it is often the most senior manager who is the most monsterly of all. It becomes the role of the Board to manage (discipline or fire) the monster.”

Sometimes statistics can help tell the story. To wit: According to a recent Gallup survey on the State of the American Manager, only 35% of managers are engaged at work!

Many monster managers may fall into the other 65% who are purportedly disengaged from their professional work responsibilities. Perhaps these disengaged mid-level managers and first-line supervisors are too focused on unprofessional, unethical or unlawful conduct — to which many employees can attest through on-the-record testimonials in legal proceedings.

According to HR Magazine of the Society for Human Resource Management or SHRM:

This is why it’s critically important for executive management and leadership to comprehend the true extent of the problem, as well as the negative repercussions, rather than sweeping it under the rug.

In essence, it simply makes good business sense for all employers to make sure their organizations are built on a foundation of strong ethics, as well as professional conduct and personal values.

But what should YOU do when trying to fend off a monster manager? What are some of the best and worst options?

Following are some suggestions for consideration and discussion below…

Five ways to engage with, or escape from, monster managers include (but are not limited to) the following:

The latter option, which is the most direct form of engagement, is also the road less traveled when dealing with monster managers. Therefore, fighting back will be further examined in an upcoming post.