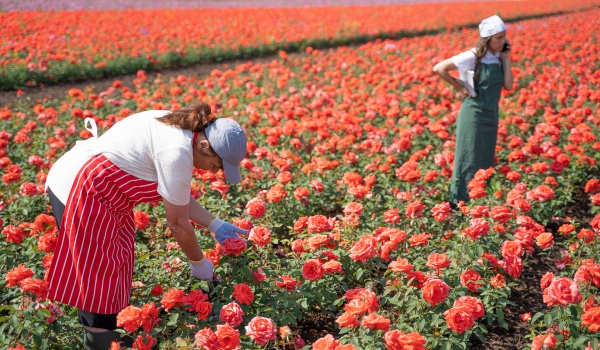 This research focuses on the Kenyan rose export industry to address these questions. The industry is characterized by the presence of two distinct mechanisms for exporting flowers: the auctions market for flowers in the Netherlands; and direct relationships with foreign buyers.

An intuition common to all theoretical analysis of contracts is that a relationship is only as valuable as the largest temptation that parties can resist. The authors thus use the high market prices in the Dutch auctions on Valentine’s Day – when rose prices peak – to measure the value of a relationship.

They find that relationships are hugely valuable – a fact consistent with severe contractual imperfections – and that the volume of trade between Kenyan flower producers and foreign buyers is indeed constrained by the value of these relationships.

Relationships between rose exporters and buyers typically start small and then progressively grow to become more valuable. Why does this happen? The researchers argue that by consistently delivering roses in a timely and reliable manner, exporters acquire a reputation for reliability that encourages buyers to place larger and larger orders over time.

Their study also exploits an unanticipated crisis induced by ethnic violence that forced exporters to choose which of their buyers should be made a priority. The results show that exporters counted on their long-time partners to be more understanding, while trying to ensure that newer relationships in which much remained to be proved didn’t fall apart.

Exporters’ behavior thus shows that acquiring a good reputation for reliability is a key concern. This matters for policy-makers trying to promote exports: while reputation takes time to build, it can be quickly destroyed by a short crisis. Reputation is also a public good: the misbehavior of early entrants might make it harder for future generations of exporters to break into foreign markets.

The researchers note that certifications, business associations and subsidies for joint marketing activities are proliferating, especially in developing countries. These institutions offer sellers a faster way to signal their reliability and to generate positive perceptions among potential buyers around the world.

Globalization gives producers in developing countries the opportunity to serve larger, richer, and more demanding foreign markets. But between these producers and potential consumers in the West sit large buyers, such as Carrefour, H&M, Tesco, and Walmart, with whom business relationships must be negotiated.

Due to the large opportunity costs of time and shelf space, Western buyers place a high value on reliability of supply. Sourcing from developing countries, in which suppliers often face volatile conditions and poor institutional environments, becomes a key strategic decision. On the one hand, there are huge potential gains when buying from countries with lower wages and cheaper costs. On the other hand, uncertainty looms much larger and the risk of ending up with supply chain disruptions is all too real.

How do buyers go about solving this problem? In the marketplace of introductory economics textbooks, information is freely available and symmetrically distributed, and it is costless to enforce a contract or promise. Reliability can therefore be purchased like any other good, and relationships with suppliers have no value.

In reality, information is neither perfect nor free, and contracts are costly and often impossible to enforce. Buyers therefore form collaborative long-term relationships with their foreign suppliers.

While these relationships are potentially valuable for solving problems of contract enforcement, they are hard to initiate and sustain. This is true in general, and particularly in the context of international trade. When trade crosses borders, there are higher costs of monitoring and enforcing contracts. Cultural differences can also increase the costs of reaching agreement and resolving problems.

Kenya’s rose market offers an ideal laboratory to quantify the value of sourcing relationships and how they function. Since roses are easily perishable, it can be hard to prove in a court that any particular batch of roses arrived in bad condition. Buyers and sellers are also dispersed around the globe so news of bad behavior doesn’t travel fast. And with the cost of seeking legal enforcement across borders prohibitively high, buyers are left with no recourse if they are jilted by their suppliers, particularly in the run-up to seasonal peaks in demand, such as Valentine’s Day or Mother’s Day.

Our analysis is based on the intuition that a relationship is only as valuable as the largest temptation it can resist. We apply this insight to quantify the value of relationships in this market.

In addition to transactions within a business relationship, roses are sold on a spot market – the Dutch auctions in the Netherlands. The difference between the price at the auctions and the price in the relationship allows us to measure the ‘temptation’ – how much more money a rose farm would make if it reneged on its agreement and sold its flowers in Amsterdam instead.

During the Valentine’s Day peak, prices at the auctions are very high. Yet Kenyan exporters still supply flowers at lower prices to foreign buyers despite the lack of (enforceable) contracts. The difference provides a bound for how valuable the relationship must be to the seller.

To illustrate this idea, consider the following example. If a rose farmer sells roses to a florist in Europe for $10,000 during a high-demand period, such as Valentine’s Day or Mother’s Day, when the same roses could have fetched $25,000 at auction, that is evidence that the seller values the relationship with the buyer at $15,000 or more. Using this intuition, we calculate that at any one time, the average rose exporter in Kenya has relationships with overseas buyers worth approximately $150,000 in total.

The importance of reputation

Our analysis shows that relationships between rose exporters and buyers start small and then progressively grow to become more valuable over time. Why does this happen? We argue that by consistently delivering roses in a timely and reliable manner, exporters acquire a reputation for reliability that encourages buyers to place larger and larger orders over time.

We take advantage of a ‘natural experiment’ to uncover the importance of reputation. We study how relationships respond to an unanticipated shock.

In early 2008, electoral violence spread across parts of Kenya in the wake of a contested general election. This was a tragic episode that set back democratic consolidation and left hundreds dead. But it was also of concerns to flower merchants in the developed world who were counting on deliveries of flowers in the run-up to Valentine’s Day.

The electoral violence meant that sellers who had committed to delivering thousands of roses to multiple buyers were not able to harvest them, as workers couldn’t come to the farms. Nor could they transport them, as roads were dangerous. Exporters thus were not able to fulfill all their orders and please every buyer, so they had to make tough decisions about which buyers to alienate and which to make a priority.

Tallying up deliveries during this period, we find a striking pattern. Flower farms affected by violence seemed to favor buyers with whom they had moderate but not longstanding relationships (see Figure 1).

Figure 1:
The relative reliability of rose exporters in Kenya during post-election violence in 2008 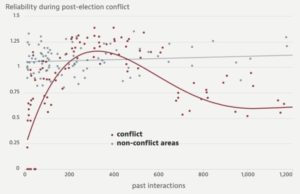 Notes: Each point represents one buyer-seller relationship. Exporters affected by violence (red points) seemed to make ‘middle-aged’ relationships a priority at the expense of very new and very old relationships

The surprising pattern is consistent with a reputation for reliability being important in this market. From the point of view of the exporter, a relatively new relationship with a buyer is not yet very valuable – and thus more recent clients are not worth being made a priority.

On the other hand, the exporter also has already gained the trust of long-established clients: farms could count on their long-time partners to be more understanding and not infer much about their reliability at such a difficult time. In other words, a buyer who has reliably sourced from a supplier for a very long time wouldn’t infer much about the supplier’s reliability after one missed delivery during a very difficult time.

Thus, it is clients with whom relationships are valuable, but with whom the farm has not yet fully proven its reliability, that must be made the priority.

Putting a value on relationships

A coherent picture emerges from our analysis. First, relationships are valuable: they are worth at least 20% of yearly turnover for the average relationship in the sample. These are economic rents (they are not available in the open market, but only from specific relationships), which implies that many profitable relationships cannot be started because of poor contract enforcement.

Second, learning is important. Relationships are valuable because learning about an exporter’s reliability takes time. This tends to be the salient aspect of the relationship when exporters are newer and less established than buyers. In this setting, early disappointments can shape negative perceptions, stopping many valuable relationships from forming.

From a policy perspective, it is important to know whether learning and reputation are important determinants of firms’ success in export markets. Firms might have to operate at initial losses in order to acquire a good reputation. True patterns of comparative advantage might take a long time to reveal.

Furthermore, if reputation is an important determinant of contractual outcomes, prior beliefs about sellers affect buyers’ willingness to trade, at least for a while. Prior beliefs – akin to stereotypes – generate externalities across sellers and over time, justifying commonly observed institutions such as certifications, business associations and subsidies for joint marketing activities.

Longstanding relationships can offer considerable value, but by their very nature, they are time-consuming to form and maintain. Associations and certifications are proliferating – especially in developing countries – because they offer sellers a faster way to signal their reliability and to generate positive perceptions among potential buyers around the world.

This article summarizes ‘The Value of Relationships: Evidence from a Supply Shock to Kenyan Rose Exports’ by Rocco Macchiavello and Ameet Morjaria, published in the American Economic Review in September 2015.

Rocco Macchiavello is at the London School of Economics. Ameet Morjaria is at Northwestern University.

This post was previously published on microeconomicinsights.org and is republished here under a Creative Commons license CC BY-ND 4.0.