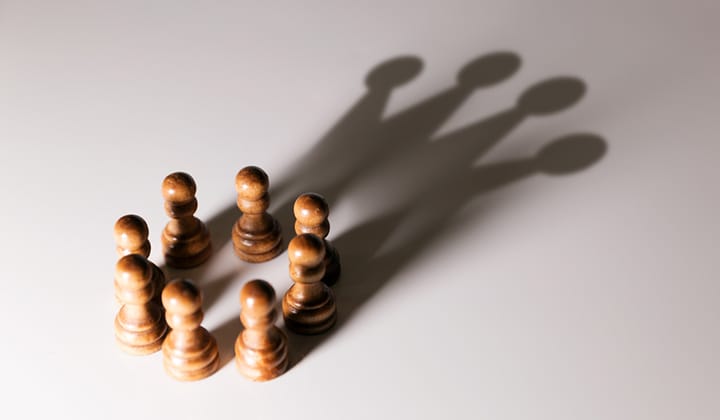 It sounds so good.

When Robert Greenleaf writes about servant leadership, he is describing what we should all want to be. Tell me this doesn’t make you feel just delicious:

“A servant-leader focuses primarily on the growth and well-being of people and the communities to which they belong. While traditional leadership generally involves the accumulation and exercise of power by one at the “top of the pyramid,” servant leadership is different. The servant-leader shares power, puts the needs of others first and helps people develop and perform as highly as possible.”

You are not an accumulator and exerciser of power, are you? You’re not a greed-driven Gordon Gekko. You’re not even a Martin Shkreli-flavoured petty tyrant. It’s so easy to tell which side you’re on here, because the other side is full of monsters.

And so it goes that, when I’m talking to managers, I hear this stuff a lot.

I try to think of myself as a servant leader, not a boss.

I see my job as being about helping, and about getting things out of their way.

You have to invert the pyramid. They don’t work for me; I work for them.

The body of writing on servant leadership has answers for all this, of course. There are arguments about how it is a service to give someone hard feedback about their behaviour, or to tell them they haven’t yet earned a promotion. Sure, I’ll buy it. Those things, done well, are gifts. I’ll even agree that there are cases where it can be a service to someone to fire them. But that’s not how I see the phrase being used.

More often than not, what I see when you choose this phrase for yourself is evasion. Most leaders get no training on how to manage people when they’re put into the role. You were an individual contributor yesterday. You were a copywriter, or an engineer, or a designer. Today you have a new title and, with it, a bunch of authority over the people who were your peers. If you have any empathy at all, that’s a complicated feeling. When that empathy mixes with your imposter syndrome, the discomfort is too much. You grab at anything that makes that authority seem smaller.

I am not an authority. I’m not looking to be an asshole boss, we’re really just collaborators. I’m administrative overhead. My job is to get stuff out of your way so you can do the real work. I’m here to serve you.

I know these lines because I’ve used these lines. Maybe you have, too.

And maybe you’ve had someone say them to you. What did that feel like? For me it felt a little hollow. I appreciated the sentiment, but I also knew that this person was not really my servant. It would matter in a new way how pleased they were with my work. I would need to take different care with them to ensure they understood my goals and struggles. I understood why they were saying it. I was glad they wanted our relationship to have those elements of support. I just also knew they weren’t really a servant. Not really.

Sit in the Seat

Look, I don’t want you to abandon the idea of service. Focusing on the growth and well-being of your people is a rich and wonderful thing for a leader to do. When your teams understand that you’re there for them, that you are dedicated to their success, they will trust more, push more, and grow more.

What I’m saying is that it can’t be the only tool in your kit. Own the authority of your role. If that authority is uncomfortable and you’re worried about wielding it poorly, then get educated. You can be a better boss than the ones you’ve had. Figure out when your duty of service is to the individuals on your team, and when it’s to the organization at large. Figure out how you want to act in the rare but real cases where those are in conflict.

It’s uncomfortable to see your part in a power structure, but it doesn’t help to pretend that power doesn’t exist. Power in an organization is a kind of privilege, and privilege is notorious for being invisible to the people who hold it. It’s the same thing that makes well-meaning white leaders explain that they “don’t see race.” Or all-male VC teams fret that they would love to hire a qualified woman if only they could find one.

They think they’re being noble and sharing power, too. But when they deny the obvious power inequity, they cement it. They make it harder to point out that it’s not true, that the system isn’t balanced. It is a punt on their own accountability. All while telling you how generous and fair they are.

Don’t fall for this trap. Don’t let privilege trick you. Acknowledge it. Be deliberate about how you use it. Invest in your people, help them grow, serve them when that’s the right choice. But don’t pretend you don’t have power as a manager. Owning it is the only way to earn it.

Originally published on Medium. Republished under this Creative Commons license.