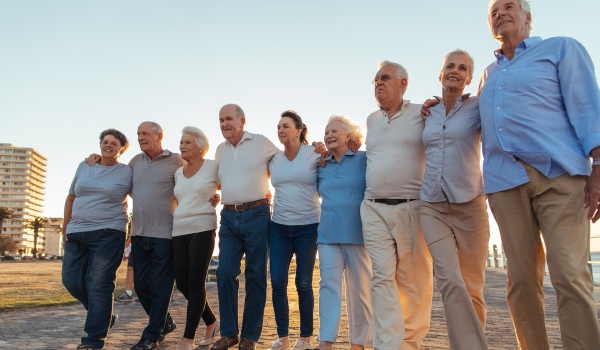 The Pew Research Center recently put out a report on the share of U.S. older women living alone. The main finding they reported was a reversal in the long trend toward old women living alone after 1990. After rising to a peak of 38% in 1990, the share of women age 65+ living alone fell to 32% by 2014. It’s a big turnaround. The report attributes it in part to the rising life expectancy of men, so fewer old women are widowed. 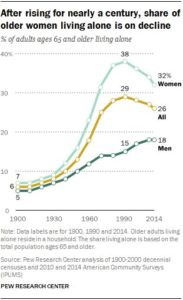 The tricky thing about this is the changing age distribution of the old population (the Pew report breaks the group down into 65-84 versus 85+, but doesn’t dwell on the changing relative size of those two groups). Here’s an additional breakdown, from the same Census data Pew used (from IPUMS.org), showing percent living alone by age for women: 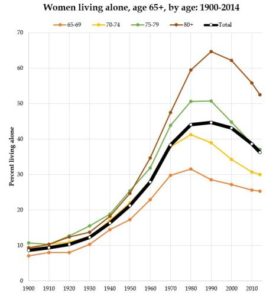 The age distribution in the 65+ population has changed in two ways: in the long run it’s getting older as life expectancy at old age increases. However, the Baby Boom (born 1946-1964) started hitting age 65 in 2010, resulting in a big wave of 65-69s pouring into the 65+ population. You can see both trends in the following figure, which shows the age distribution of the 65+ women (the lines sum to 100%). The representation of 80+ women has doubled since 1960, showing longer life expectancy, but look at that spike in the 65-69s! 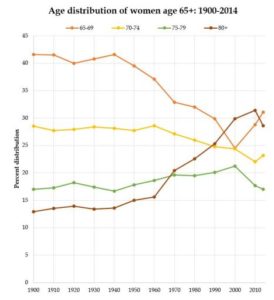 Given this change in the trends, you can see that the decrease in living alone in the 65+ population partly reflects greater representation of young-old women in the population. These women are less likely to live alone because they’re more likely to still be married.

On the other hand, why is there such a steep drop in living alone among 80+ women? Some of this is the decline in widowhood as men live longer. But it’s an uphill climb, because among this group there is no Baby Boom spike of young-olds (yet) — the 80+ population is still just getting older and older. Here’s the age distribution among 80+ women (these sum to 100 again): 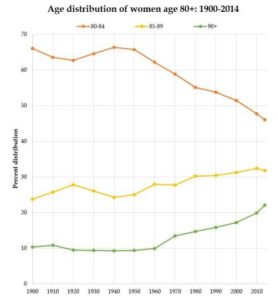 You can see the falling share of 80-84s as the population ages. If this is the group that is less likely to live alone the most because their husbands are living longer, that’s pretty impressive, because the group is aging fast. One boost the not-alones get is that they are increasingly likely to live in extended households — since 1990 there’s been a 5% increase in them living in households of at least 3 people, from 13% to 18%. Finally, at this age you also have to look at the share living in nursing homes (some of whom seem to be counted as living alone and some not).

In addition to the interesting gerentological questions this all raises, it’s a good reminder that the Baby Boom can have sudden effects on within-group age distributions (as I discussed previously in this post on changing White mortality patterns). Everyone should check their within-group distributions when assessing trends over time.

Previously published on familyinequality.com and is republished here under a Creative Commons license.
—