Editor’s note: The following is an excerpt from the book Our Happy Divorce: How ending our marriage brought us together.

Living in a hotel isn’t so bad. Actually, it was pretty cool at first, before I’d tried everything on the room service menu and watched everything on pay-per-view. Leaving my room for the first leg of my new daily commute that morning, though I had to admit that the novelty had worn off over the past few months. Now, the most exciting days were when the hotel added a new movie into the rental rotation.

The clock on my dash lit up as I started the car—six-thirty on the dot. Our home was less than five miles from my room at the Renaissance, no more than fifteen minutes in the worst traffic, but I didn’t play fast and loose with the timing. Asher’s sleep schedule was downright robotic. He went to bed every evening exactly at eight and woke up, without fail, between 6:55 and 7:10. I always gave myself at least an extra ten-minute buffer to get inside and get settled.

I didn’t always make it over for bedtime, but Nikki would cover for me on those nights, letting Asher know I was at a meeting or a business dinner. I was always there when he woke up in the morning, though. I snuck into the house to preserve the illusion that I was still living there. My son was only three, still young enough that Nikki and I could try to hide the growing rift between us.

Getting out of the car was like jumping into a sauna. My shirt was already sticking to my back, and the sun hadn’t even fully risen yet.

“Tampa,” I cursed under my breath. 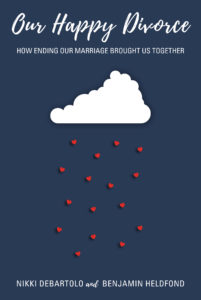 I was in a weird mood already. The entire time I’d been out of the house, Nikki and I had been talking about getting back together and giving it (yet another) shot. I had almost been completely convinced, before last night. In the space of one breath, Nikki had gone from telling me how much she loved me and how much she wanted to work on the relationship to informing me she would be in L.A. that weekend. In the back of my mind, all I could think was that these were just words that I had heard before and nothing was going to change. Our relationship had gone insane—not violent or nasty, but insane like watching your favorite movie for the hundredth time and thinking the ending was going to be different this time.

So, that morning, I was already a little on edge and confused as I walked into the house. Luckily, Asher and I are creatures of habit, and our morning routine did not let me down: a big smile, a big hug, and Shrek Eggo waffles before work and school.

“Hey buddy!” I boomed as he came into the kitchen. “Dad!” Asher grinned.

I popped the Eggos into the toaster and grabbed the newspaper, leaning up against the counter. My phone buzzed steadily beside me, and I multitasked happily between work emails, my son, and sport scores.

Too soon, Asher finished his breakfast and ran to get his backpack.

I wrapped him up in a bear hug and watched as he and the babysitter left for school.

The happy, homey feel dissipated behind them. I was alone in the house, feeling out of sorts again. I wandered aimlessly around the kitchen, trying to remember what specific event had spurred me to move out. To this day, I honestly don’t remember.

Nikki and I never really fought. Over time, our marriage had just devolved; it felt like living with a roommate. It was awkward, and it wasn’t fun anymore. Instead of being adults and honestly asking ourselves what we were doing, we’d just swept things under the rug while hoping our relationship would miraculously mend. We’d both suspected our differences were too big to solve, so we’d stopped communicating at all.

We were in limbo now. On some level, we both knew that we needed to do something different, but we were too proud and stubborn to admit defeat. We were scared to even face the idea. We didn’t want to subject our son to a divorce. We wanted to provide Asher with a two-parent household; we wanted to stay together for him. We considered divorce a failure, and we didn’t want to fail ourselves, our families, our child.

I decided to grab some fresh clothes and some paperwork to take back to the hotel with me, so I walked into my office—well, the office that I’d once occupied. Since I’d been gone, Nikki had quickly made it her own. I sat down at the desk in front of my computer, but I was distracted. The two brain cells I had left in my head began throwing stones at each other.

You owe it to the marriage and your son to not throw in the towel. Are you crazy? What is going to be different?

Absentmindedly, I started riffling through a stack of papers on the desk. I stopped short at the sight of one of Nikki’s world-famous handwritten calendars.

Nikki has always been an organizational powerhouse, and these calendars were fine-tuned, well-choreographed masterpieces. This coming weekend, of course, showed her trip to L.A. to work on her jewelry business—an irritating reminder. As my eyes trailed further down the calendar, though, I could feel the blood rushing to my head and my heart pounding through my chest. Irritation turned to fury.

She was scheduled to be gone for the next four weekends.

How the fuck are we going to work on our relationship if she’s living a totally separate life in L.A.?

The thought struck me like divine intervention. Nikki had done a great job telling me exactly what I wanted to hear, but none of it lined up with her actions. She wasn’t here doing the work to mend this, and she clearly wasn’t planning to schedule it in. My house wasn’t mine, my marriage wasn’t mine—even my life didn’t feel like my own.

Ten years of trying to fit a square peg into a round hole had taken its toll. I was depressed and hurt. My ego was shattered. I was done. I didn’t call or leave a letter. I left my wedding ring on top of the stack of mail and walked away, bitter and out for blood.

Marriage Story: A Review from the Real-Life Version

There could be a happy divorce at the end of all of this.

About Nikki DeBartolo and Benjamin Heldfond

Nikki DeBartolo and Benjamin Heldfond are co-authors of the book Our Happy Divorce: How ending our marriage brought us together.

From weeknight dinners and homework sessions to Christmas card photos and vacations, Nikki and Ben have created a tight-knit, enviable family. They work and play well together, from the smallest daily tasks to the biggest life events—and it only took a divorce to get them there. Though their marriage has been over for nearly a decade, they still share a happy life with each other and their son Asher, along with their spouses and children.

Nikki and Ben had hoped their wedding would start their happily ever after—but seven years, one child, and countless financial and familial entanglements later, their I do-s had turned into We can’t-s. Armed with their fierce love for their son and a desire to give him the best, they realized they needed to find an alternative to the seemingly inevitable toxic divorce that loomed over their lives.

Refusing to participate in the standard litigious legal divorce process, they devised a new strategy and worked to confront their hurt feelings and fragile egos head-on. Committed to putting Asher’s needs first in every decision, they helped each other heal and build a future. Their happily blended family today is a testament to their commitment to a few core principles and their incredible son—during the divorce and beyond.

Throughout the book, Nikki and Ben elaborate on the difficulties of their divorce experience, their individual pains and triumphs, as well as their unique approach to relationships and blended families. Their story is sure to inspire others to pursue something few believe possible...a happy divorce.

Facebook3Tweet1Pin1Email2Shares7
wpDiscuz
0
0
Would love your thoughts, please comment.x
()
x
| Reply
Share this ArticleLike this article? Email it to a friend!
Email sent!