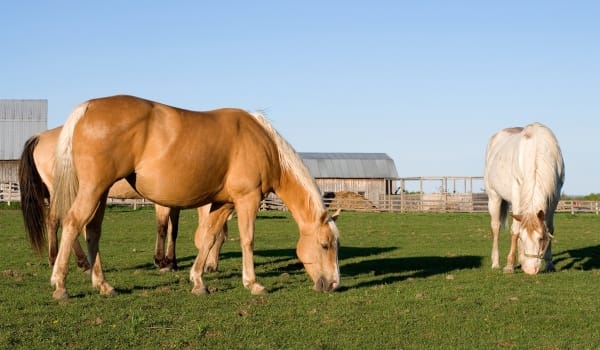 —
From a distance, Whisper Ridge Ranch looks just as billed; a pastoral sanctuary for older horses to live out their days in comfort.

The rib cage of one horse in the distance is visible and its hip bones jut out. Another horse is seen clearly limping.

Two women who lived at Whisper Ridge Ranch over the winter are alleging it’s the result of animal neglect.

They provided photographs to Global News of other horses that appear even worse off.

“I want those horses out of there,” said Faith Robinson, who also worked at the farm in exchange for rent.

She has a photo of two horses, Seek and Cider, who appeared healthy when they arrived last summer.

But once at the farm the women say the animals’ condition appeared to quickly decline.

In March, Robinson and her friend Tori Black found Cider dead in a field.

“In a terrible unnatural pose, where she had clearly been struggling as she died,” said Black.

A couple of days later, Seek collapsed. The women say they sent a video of the struggling horse to the owner, who they said refused to come home or let them call a veterinarian.

“The horse laid in its stall crying in pain for three days straight and couldn’t stand. It was bad, I, I’m sorry,” said Robinson, who had to stop talking as she broke down in tears.

“And it was just struggling and trying to stand and there was, it was bleeding from its mouth because it kept hitting its head because it would try to stand up and it would fall down again.”

The women said they tried to comfort the dying animal.

“We were there talking to her for hours and hours,” said Black. “She was just so afraid there was nothing we could really do.”

Global News tried calling, texting and emailing owner Sandra Reed and when a crew went to the farm they were told she wasn’t there.

A man, who refused to identify himself, then told the reporter and camera operator to leave despite being told Global News was looking for both sides of the story.

“You will hear ours,” he responded, “Not right now.”

Global News left the property and was shooting video from the road, when a woman from the farm approached, taking photographs.

Yet when she was asked for a response to the accusations of neglect, she declined to answer and then called the police.

An Ontrario Provincial Police cruiser showed up to the scene, then entered the property.

Meanwhile, concerned citizens claim horses on the property are starving.

“They don’t receive any vet care, no vaccines, no deworming, anything like that,” said Black.

Once they had what they believed was enough evidence, the women took the photos and video to the Ontario Society for the Prevention of Cruelty to Animals in March.

They expected an investigation would be launched immediately.

“I didn’t get a response at all,” said Robinson. “I just got a confirmation that I sent it.”

She followed up but says she didn’t get much response, until turning to social media this week.

OSPCA did not make anyone available for an an interview, but after Global News’ broadcast they sent a statement confirming an investigator visited the farm with a veterinarian on July 12.

Robinson said they want the horses removed and for some kind of action to be taken against the owner.

“I want them fed and I want her to never own animals again,” she said.

This post was previously published on ecowatch.news and is republished here under a Creative Commons license.