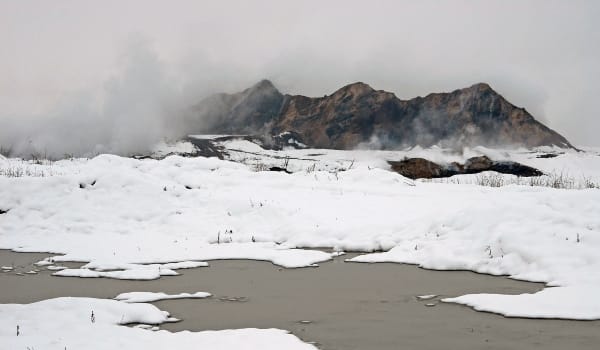 LONDON – The first kiss of sunlight on the frozen soils of the Arctic could spell increasing trouble as the world warms.

The return of the spring sun melts domes and lakes of frozen water called thermokarsts – karst is a word usually linked to limestone country, but it has been pressed into service as a label for the hard surfaces caused by ice. Within this ice is dissolved organic carbon. Once the ice melts, microbes get to work releasing carbon dioxide into the air. The soil thaws, the surface collapses, lakes form, water flows, land surfaces erode which in turn releases more carbon dioxide to create more warming, to make the tundra even more vulnerable to spring thaw, and of course to accelerated warming.

This is not a scare story. It is happening now, according to Rose Cory of the University of North Carolina and colleagues who report in the Proceedings of the National Academy of Sciences. They analysed water from 27 undisturbed sites in Alaska, and seven unique thermokarst failures – a polite word for landslides – near Toolik Lake in Alaska. The places they examined had been frozen for at least 10,000 years, and in some places two million years.

The team found dissolved organic carbon in all of them, and they found that newly-exposed muddy water was liable to surrender 40% more CO2 to the atmosphere. This has of course been going on at the fringe of the Arctic permafrost for at least 10,000 years. The hazard is not in the process itself, but in its potential acceleration: nobody knows how much carbon is stored in the Arctic tundra as a greenhouse gas source, and nobody can guess what proportion of this will be released as the world warms.

Thermokarsts are also found on a smaller scale in the Himalayas and the Swiss Alps. But, as the soils warm, and the microbes get a chance to draw breath and get to work, say the authors, “the ultimate fate of deep, frozen soil carbon will be affected by coupled photobiological processing, by the available light field in streams that receive thermokarst drainage, and eventually by the landscape configuration of lakes and streams.”- Climate News Network