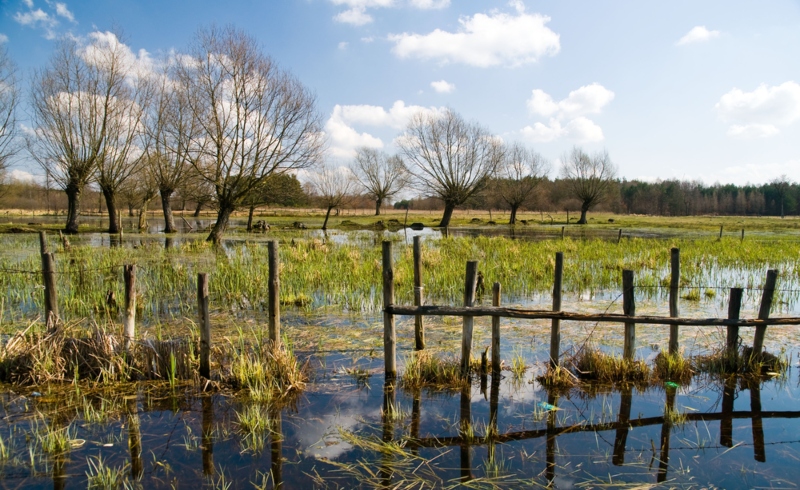 Climate scientists, struggling with the enduring problem of the carbon budget, may have to think again as a result of new research findings.

One experiment, in the UK, has shown that the ponds, lakes and standing water that cover 4% of the Earth that isn’t glaciated could release perhaps twice as much greenhouse gas as they warm this century.

And a second study, in the US, has demonstrated that climate scientists have seriously over-estimated the soil’s capacity to absorb carbon. It may be able to soak up only about half as much as they thought.

The carbon budget is the first and biggest headache of climate research.

For the last 10,000 years or so, carbon dioxide levels in the atmosphere hovered at around 280 parts per million. Plants built their tissues from atmospheric carbon, animals devoured plants and released most of the carbon again as a greenhouse gas, and planetary temperatures hovered around a long-term average.

Then, 200 years ago, humans began burning coal and oil that had been locked away in the sedimentary rocks for more than 100 million years, releasing ancient carbon back into the atmosphere.

Some of it is absorbed by the forests, some of it ends up as shells and fishbones in the ocean, and some of it is preserved in the silts of lakes and ponds.

But some stays in the atmosphere to raise planetary temperatures to increasingly alarming levels − with carbon dioxide ratios having tipped 400 parts per million, and global average temperatures on average having already risen by 1°C.

To make sense of what will happen in the next decades, climate scientists urgently need accurate estimates of how much atmospheric carbon will be sequestered in the soils and water, and how much will linger in the atmosphere.

That is why the results of a simple set of experiments conducted by UK universities could be bad news for attempts to balance the carbon budget.

Scientists report in Nature Climate Change journal that, over a seven-year period, they warmed experimental ponds by between 4°C and 5°C – which is what the atmospheric temperatures will rise by in this century unless there are drastic cuts in greenhouse gas emissions.

They then studied the levels of carbon dioxide stored in the ponds and the rate at which another greenhouse gas, methane, is released.

In the seven-year span, the ponds’ ability to store carbon dioxide was reduced by half, while methane release almost doubled.

“Our findings show that warming can fundamentally alter the carbon balance of small ponds over a number of years, reducing their capacity to absorb carbon dioxide and increasing emissions of methane,” says Gabriel Yvon-Durocher, chair in ecology at the Environment and Sustainability Institute at the University of Exeter, who led the study. “This could ultimately accelerate climate change.”

Meanwhile, the soil around the ponds could add to the problem.

Climate models make assumptions − one being that the carbon locked away in the world’s topsoil is about 450 years old. But researchers from US universities did no experiments: they just analysed soil carbon data from 157 soil samples around the world, and did the sums.

They report in Science journal that soil carbon age was in fact a great deal older than the standard estimates. Rather than 430 years, plus or minus 50 years, the carbon residue was about 3,100 years old, plus or minus 1,800 years.

This means that the existing models have over-estimated, by a factor of two, the rate at which carbon is sequestered in soil.

“Therefore, a greater fraction of CO2 emissions than previously thought could remain in the atmosphere and contribute to global warming,” they conclude. – Climate News Network

—
Previously published on climatenewsnetwork.net and is republished here under a Creative Commons license.
—