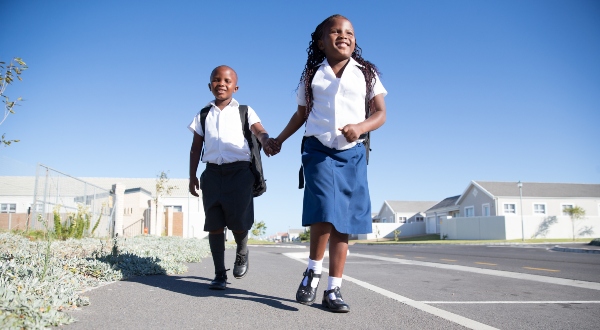 On 11 October, the world observes the International Day of the Girl Child, also known as the Day of Girls – a day dedicated to raising awareness of the issues facing the 1.1 billion girls in the world and promoting their empowerment. First proposed by Plan International and supported by the Canadian government, the day was adopted by the U.N. in 2011.

Each Day of Girls has had a specific theme, ranging from ending child marriage to improving girls’ education outcomes to combating gender-based violence. This year’s observance celebrates achievements on girls’ issues over the last 25 years, including on four of the main challenges disproportionately affecting girls around the world:

Globally, around 21 percent of young women have been married before the age of 18 – and that percentage runs as high as 38 percent in sub-Saharan Africa and 30 percent in South Asia. Girls are five times as likely as boys to be married as children.

Girls who marry as children are more vulnerable to domestic and sexual violence as well as sexually-transmitted diseases. They’re also more likely to become pregnant – 90 percent of births to girls occur within marriage – and to drop out of school, which can limit their future employment opportunities, reducing their future earnings by 9 percent.

Closely tied to the issue of child marriage is that of reproductive justice. According to the World Health Organization, about 21 million girls aged 15 to 19 become pregnant each year in developing regions, in addition to 2 million under the age of 15 – and complications during pregnancy and childbirth are the leading cause of death for girls in this age group globally. Babies born to child mothers are also at greater risk of stunting and more likely to die by the age of 5.

Although most adolescent pregnancies are planned and a result of child marriage, many are due to lack of access to contraception and abortion. Girls aged 15 to 19, as well as poorer and less educated women, are the most likely to have unmet needs for contraception. Likewise, girls in this age group undergo 3.9 million unsafe abortions each year.

These issues aren’t limited to developing countries: in the U.S., around 20 million women of reproductive age lack access to the full range of contraceptive methods.

“Period poverty” is stopping girls from going to school…

Ending child marriage – and thus reducing adolescent pregnancies – is one of the key ways to keep girls in school and ensure that they can enjoy greater opportunities in adulthood. Yet 130 million girls between the ages of 6 and 17 are out of school globally, and 15 million girls of primary-school age will never go to school.

Much of this has to do with the social stigma around menstruation and lack of access to sanitary products, toilets, hand-washing facilities, or menstrual hygiene education – a phenomenon known as “period poverty.” Girls often cannot afford the high cost of sanitary products, which are subject to sales tax in many countries around the world. Roughly 10 percent of girls in Africa miss school because of their periods each year, as do 137,000 girls in the U.K., where one in five girls and young women have been bullied about their periods.

…as is gender-based violence

Every year, about 246 million girls and boys are harassed and abused at or on their way to school, with girls particularly affected, limiting their academic performance and increasing both absentee and dropout rates.

Violence against women and girls remains shockingly prevalent, with 35 percent of women worldwide having experienced intimate partner violence or non-partner sexual violence. Some 200 million women have undergone female genital mutilation, most of whom were cut before the age of 15.

And 28 percent of human trafficking victims worldwide are children, the vast majority (20 percent) of whom are girls. In sub-Saharan Africa, Central America and the Caribbean, over 60 percent of trafficking victims are children. Girls and women are mainly trafficked into marriage or sexual slavery, while boys and men are typically forced into physical labor or slavery.

But there are reasons to be optimistic…

The statistics make for gloomy reading – but there’s no denying that much progress has been and continues to be made.

Twenty-five million child marriages have been prevented in the last decade, with most of this progress coming from South Asia, where the prevalence of child marriage has declined from 49 percent to 30 percent.

Last year, Scotland became the first country in the world to provide free sanitary products to all students in schools, colleges and universities as part of a GBP 5.2 million (USD 6.3 million) scheme to end period poverty.

…and empowering girls empowers us all.

It’s clear that an important way to empower girls, women and their children is to end child marriage and ensure that all girls complete their secondary education – but these measures also have wide-ranging benefits for society as a whole.

Universal secondary education for girls could increase global human capital by up to USD 30 trillion. Likewise, by reducing fertility, eliminating child marriage could reduce global population growth by 0.3 percent per year, which could create additional benefits of some USD 3 trillion within a year.