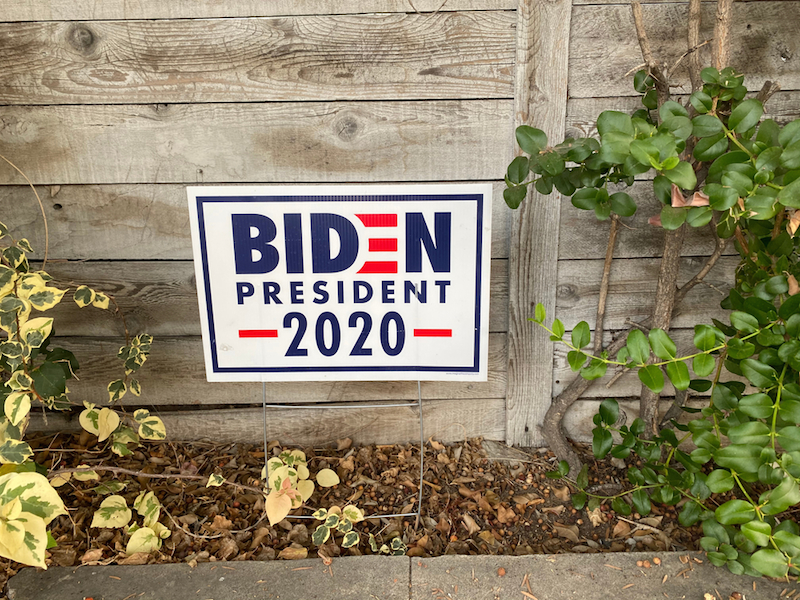 Last week I wrote a letter to the outgoing President entitled An Incoming Letter for the Outgoing President. It felt only appropriate to pen one for Joe Biden since it is not likely x infinity that there will be one waiting for him in his desk drawer on 1/20/2021 left by the current occupant of the Oval Office as is customary. Even two weeks after the results were announced that declared Joe Biden and Kamala Harris the President-Elect and Vice President-Elect, the 45th to wear those titles is still promulgating lies and spreading fear as thick and Nutella on whole-grain toast (although not at all sweet or nourishing). Lawsuit after lawsuit and roadblock after roadblock are being plowed down and yet, dangerously further polarizing an already divided country. 75% of those who cast their votes for four more years of chaos, admitted believing that the election was being stolen by those unscrupulous Dems. Pro-Trump rallies (a.k.a irresponsible super spreader events) are still occurring, further stirring hatred and inciting threats of violence. I am heartened by the number of Republicans who are starting to speak out and appalled by those whose silence indicates complicity, fueled by their fear of retribution. What about the Constitution and populace they swore an oath to protect and defend? How do they sleep at night and face their children and grandchildren whose future is being threatened?

On to the letter…

I have been referring to you that way since you won the Democratic nomination. I cheered and wept, knowing that you would be the uniting force that could help mend the rend that shredded our nation in the past four years. I didn’t kid myself into thinking you could be expected to do it alone. I was heartened that you tapped Kamala Harris to be your running mate and she wholeheartedly accepted. I saw that this alliance with someone who had voiced challenges with you as a candidate herself meant that you could rise to the occasion and find commonality with those whose ideologies might differ from yours. I loved watching the easy bond between you and the partnership that you each have with your spouses who were not just cheerleaders behind the scenes, but a visible presence on the campaign trail.

Campaign signs were planted in my yard and a sign on my dashboard following a Ridin’ With Biden’ rally in Doylestown, PA. Both are there to this day. As much as I wanted to, I refrained from attending any in-person events as I promised my son and daughter-in-law since their health and safety and that of my now 10-month-old grandson is precious. At the beginning of the pandemic, 11 weeks passed before I could see them. Now I babysit four mornings a week. We and her parents and sister are in the babysitting bubble. We will be the ones spending Thanksgiving together since we are bonded by baby drool.

I offer daily prayers for your success and have your photos and campaign stickers perched on altars in my house as reinforcement. I strongly believe in the power of intention.

I sat, night after night with skipping heartbeat and bated breath watching CNN and MSNBC journalists offering their commentary. Fear and faith lived side by side. On Election Night, I sat with friends on a Zoom call counting the votes as they came in from each state. I made it until 2 a.m. with a bit of faith restored. I blurred through the next day at work. I am one of the fortunate who can work from home, as a therapist offering telehealth sessions. The election has been a topic of conversation in our sessions as their anxiety was sometimes through the roof. Some voted for you and some for the incumbent. I have needed to hold space and be compassionate to each, knowing that when the final votes were tallied I would be picking up pieces for some of them.

Even now, two weeks into the process I am grateful that you and Vice President Harris are doing your level best to prepare your transition, without taking the bait from the man who is doing his desperate worst to maintain a hold on power for his own nefarious reasons.

As a peace and social justice advocate and activist, I use my presence to show up, stand up, and speak out. I stand with you as you and Vice President Harris take on this monumental task.

I am looking forward to welcoming Jill and Doug who I have been thrilled to see as your partners on the journey of life as they stand with you on Inauguration Day.

Bless you, Joe and Kamala.

FacebookTweetPinEmailShares636
wpDiscuz
0
0
Would love your thoughts, please comment.x
()
x
| Reply
Share this ArticleLike this article? Email it to a friend!
Email sent!