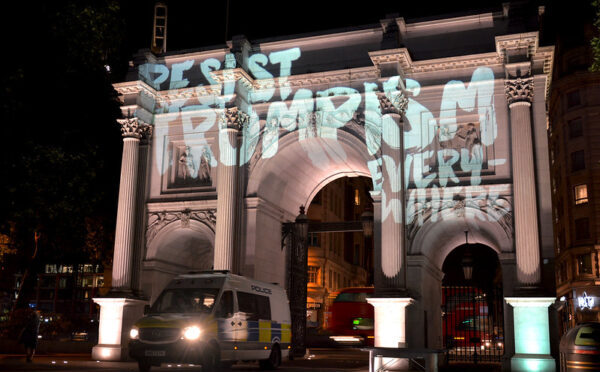 I don’t know about you, but to me this period of anticlimax, after over a year of feverish volunteering, campaigning, stress-eating, and angry-tweeting, feels like the worst kind of limbo. Election Night didn’t feel good. Questions are swirling. To make matters worse, seemingly every publication is running “Trumpism is as strong as ever” stories. The worst part: there’s nothing we can do about it.

At least, that’s how it looks on the surface. On the surface, it looks like the names we’ve spent so long trusting in, hoping for, donating to, volunteering for, are on the brink of fading into memory. Yeah, after losing a quarter-million Americans to a contagious disease, this post-election Purgatory does feel a little like the day after a death in the family.

But we are not helpless. It’s not true that there’s nothing we can do about it. We’ve done a lot of work on a political level to create the country we believe in, from the top down. But the bottom-up work comes hourly and daily; it’s harder, but it’s a hell of a lot more productive.

So, what can we do about it, exactly? In these very pages, author John Pavlovitz urged us to vote for the America we want to see. He wrote, “America is not in the hands of a politician or a preacher or an athlete or a celebrity—it’s in your hands.” While he was urging us to exercise our right (and responsibility) to vote, I think we can take that directive to heart on a daily, ongoing basis.

I say this: if you voted for Joe Biden because you believe he will create a more united United States, don’t wait for the vote counters in Pennsylvania to determine whether we get there. If you felt we needed more empathy in our society, if you’re just looking for decency in your kids’ role models, if you’re terrified about losing women’s reproductive rights, or if you see income inequality burying the American dream, the opportunity to make an immediate change is available to us now. Let’s take it upon ourselves to create the country we demand. That’s how it was always supposed to work anyway.

There are steps we can each take on an individual and on a community level to work toward the same goals we had for the national election. That disposable income you’ve been donating to Jaime Harrison and Amy McGrath? Your local Planned Parenthood could use it. ACLU is going to need to keep paying armies of attorneys. The extra time you dedicated to phone banking? Every state and metropolitan area has a racial justice organization that is engaged in everything from leading sensitivity training to monitoring police behavior.

People feel alone because we’re so divided, and we’re so divided because people feel alone. They look out across America and see factions, enemies. Everyone—from privileged Trump supporters to marginalized immigrants—feels the deck is stacked against them. Trumpism gulps this stuff down by the handful. Want to beat Trumpism? We can do that in every interaction: check in on somebody. Double your tip. If you say “how’s it going,” listen to the answer and ask a follow-up.

That humanity, that empathy, that we’ve all praised in Joe Biden exists in each of us, and the smallest gesture of support will spread faster and do a hell of a lot more good than a dunk on Twitter. Trumpism isn’t a political party to crush at the polls, it’s distrust, hatred, deeply entrenched tribalism.

If a democracy depends on an engaged citizenry, then we’ve taken huge strides forward in the past four years, even as our democratic norms and institutions have been under withering attack. Engaged citizenry will win. Strong communities will endure. And whenever this is all said and done, we will be able to say “I did everything I could to create a better tomorrow, and today is indeed better than yesterday.”

Eric Morse is a single father of four; an author, activist, and entrepreneur who once got caught between the moon and New York City. He is the author of the acclaimed children’s books What Is Punk? and What Is Hip-Hop? He can be reached at Eric@EricMorse.com and followed at @elmorse wherever snarky comments are found.